Home » News » Much to Be Done To Make Internet of Medical Things a Reality, Goldman Says at NJIT 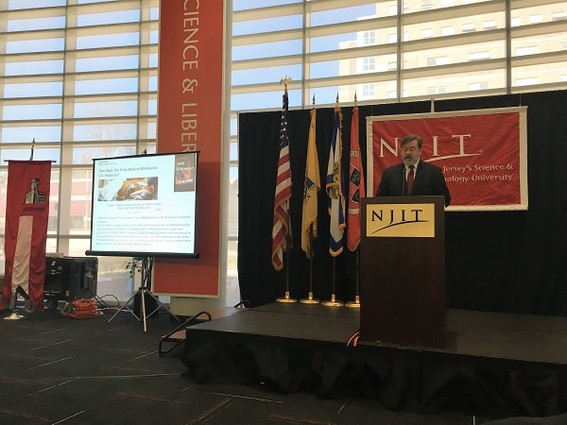 The Internet of Medical Things (IoMT) is coming, but engineers, practitioners, standards organizations and regulators have to overcome some daunting hurdles before it can become a reality, Dr. Julian Goldman said at the NJIT President’s Forum and Faculty Research Showcase, on Feb. 22.

Goldman is an anesthesiologist at Massachusetts General Hospital, but he’s also the director of the Program on Medical Device Interoperability, which is run by the hospital, Partners Healthcare (Boston) and the Center for Integration of Medicine & Innovative Technology (Boston).

This was the inaugural President’s Forum at NJIT, and it was meant to broaden the conversation about how engineering can be integrated into the humanities.

Goldman focused his talk on the prevention of loss of life due to medical errors. He described many situations in which death could  be prevented by applications of  new technology — for instance,  if the engineers could get the subtleties right, if multiple sensors could be combined and integrated, if safety could be ensured, if context could be added to the data, and if the regulation environment would permit such changes.

He was not talking about a small numbers of lives. In fact, he noted that a study in the 2013 Journal of Patient Safety had found that 210,000-440,000 hospital patients each year suffer from some type of preventable harm that contributes to their deaths. “That would make medical errors the third-leading cause of death in America, behind heart disease, which is the first, and cancer, which is second,” he said.

“I don’t plan to provide a recipe on how to innovate or solve the problem. I plan to show the journey,” Goldman said at the beginning of his talk, and he did just that.

There is no equivalent in emergency medicine or the clinical environment to the black box that helps investigators determine what happened in a plane crash, he said. “Since I was a resident, we have been unable to substantially change how we manage patients in an emergency situation. It’s a very difficult environment in which to create change. You have to optimize the use of technology and weigh the benefits and outcomes with the burden that it may introduce [in the ER].”

He added that anyone who has been sitting in a hospital with a sick child can give you a laundry list of great ideas about improvements that can be made. And there are many great ideas in Ph.D. theses that sit on the shelf. “This has been the history of slow innovation in healthcare.”

Early in his talk, Goldman addressed one problem that could be changed: alarm fatigue.

More than 10,000 alarms sound each day in a typical hospital, and 85-99 percent of them don’t require clinical intervention. Showing a bedside monitor for a cardiogram, he noted that the device will send an alarm whether the condition is cardiac arrest or the machine is simply out of paper. And a cardiac arrest alarm could be triggered by an event like interference from another machine.

The company that developed the monitor understands that if they used more than one signal to determine interference, it could probably determine if the patient is alive and not having cardiac arrest, he said. But they need an intelligent alarm, one that indicates if there is a sensor problem or a loose wire, and they haven’t been able to do that. “If they make a smarter monitor, they may run afoul of the standards that are in place and the FDA guidelines that are in place.” And their smarter monitor might still miss one of the critical alarms. “This becomes very complex, especially if the status quo is an environment where we never miss an alarm.”

The real problem is that clinicians become desensitized, overwhelmed or immune to the sound of alarms. As a result, they turn down the alarm or ignore it, and that can have consequences for the patients. This seems like such a simple issue to solve, but it’s incredibly complex, he said. However, “we are getting better at thinking” about the problem.

Goldman has been working on the OpenICE platform, which promotes an integrated clinical environment architecture, suggesting standards and interoperability methods.  The lab is “driven by clinical need, developed by computer scientists, biomedical engineers and clinicians, with regulator, industry and standards collaboration,” he said.

The current version of OpenICE enables users to convert heterogeneous medical device data into a common structure and protocol, and to exchange that data with demonstration clinical applications on a different machine (or machines). OpenICE includes several simple but useful sample applications, as well as an example code to help users to write their own.

Goldman suggested that technologists reach for the low hanging fruit, the easiest objects to reach, and solve them. These problems include: alarm hazards, data integrity issues such as missing or incorrect information and ventilator disconnections that are not caught due to incorrectly set or missed alarms.

One problem he’d like to see addressed is overdoses caused by patient-controlled analgesic devices that deliver pain relief. Sometimes the overdose is accidental, such as when a patient thinks he’s pushing the nurse-call button, or puts his elbow on the button when trying to get out of bed. And loving family members sometimes give the patient another dose while he’s sleeping, so he won’t wake up in pain.

Goldman said that six patients a day die this way. “What if we integrated multiple sensors and said if oxygen saturation is bouncing around but respiration is unchanged, no alarm would sound. But if the data from both sensors were trending in one direction, we’d have an early indication of a problem. “So why not stop the infusion automatically,” and call for help?

The solution, however, is not so simple. “There is not a single infusion pump on the market today that will receive a command electronically through its interface to stop the pump,” Goldman said. “The manufacturers don’t want the liability.”

He also warned about an old problem that affects computer systems: garbage in, garbage out. Samplings of patient data that are not rich and granular enough can lead to incorrect diagnoses.

“What happens if we start to do things more remotely,” trusting the IoMT instead of observing patients directly? “Obtaining the context is becoming extremely important,” he said.

Goldman concluded by noting that the FDA had approved some IoMT regulations, and that many of the regulations were based on work done by his team and others seeking ways to ensure safe interoperability. He also noted that he joined the IEEE ICE Alliance, which promotes medical environments that are safe, secure and interoperable.