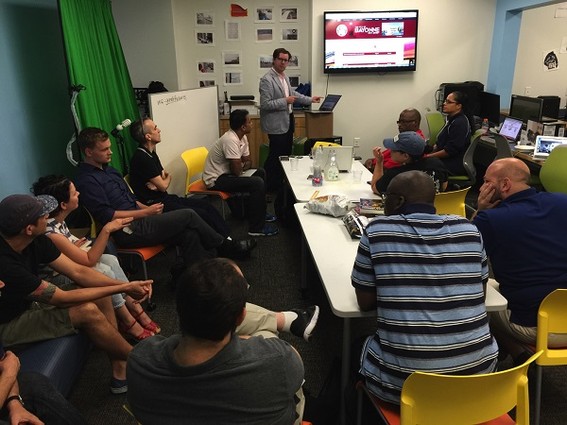 One of Code for Jersey City’s meetings. | CodeforJC

The very active civic tech community in Jersey City is coming together in an informal effort to brand Jersey City as the nation’s “Silicon Backyard,” according to Akisia Grigsby, co-brigade captain for Code for Jersey City and founding partner and co-executive director of Open JC.

Open JC is a local woman- and minority-owned social enterprise whose mission is to improve the quality of life for residents through technology-driven solutions. Code for Jersey City is one of the group’s programs, affiliated with Code for America.

Grigsby said that she had come up with the idea for this rebranding last year, while talking with the other Open JC leaders: Emmanuel A. Simon, founding partner and co-executive director, and Sharad Hegde, partner and director of engineering.

“We were at the Code for America Summit in Oakland last year. I was thinking about how Jersey City is so neighborhood-focused, and how we are really trying to elevate the role of technology in Jersey City,” she said.

Grigsby noted that, at conferences where the group had been speaking or attending, Open JC had been one of the groups leading the conversation about civic tech in the state of New Jersey.

“Through our membership, we’ve noted that there is a lot of talent in Jersey City,” she said. “They want to know how they can get involved, how they can be connected, and they would prefer to work in New Jersey, rather than in New York. However, all the infrastructure is ‘set’ in New York.”

Grigsby told NJTechWeekly.com that Gary Greenberg, executive director and CEO of the Boys & Girls Club of Hudson County (headquartered in Jersey City), who gives the group “in kind” sponsorship for meetup space, mentioned that he had had a conversation with  the CEO of Mack-Cali Realty Corporation (Jersey City). One of that company’s initiatives is to target the technology industry to get more tech companies to New Jersey, she said. Greenburg connected Mack-Cali with the Open JC group.

“During our meeting with Mack-Cali, we brought up the concept of ‘Silicon Backyard.’ The Silicon Valley movement started from startups, small groups solving problems. That’s essentially what we are doing. We identified what Jersey City has and what it’s missing to create a true silicon movement.”

What Jersey City is missing is the infrastructure, the group concluded. For example, Grigsby said, even a group like hers finds it hard to find meetup spaces that have good WIFI. Even City Hall doesn’t have good WIFI.

When asked why “Silicon Backyard,” Grigsby answered that the whole idea of creating projects out of a garage is organic and the idea is that while Jersey City can’t compete with New York, we have a friendly environment where we can lead technology for the State of New Jersey and have a better place to live and work.

“Many of the folks who work at Google in New York, for example, live in Jersey City. We are already the backyard and the backbone for Silicon Alley. Why not talk about it that way?”

Grigsby said that the Open JC group has mentioned the idea to the folks at Microsoft’s Civic Tech, Google’s Jigsaw (formerly “Google Ideas”) and Code for America, and received positive responses.

The group is moving forward with the branding initiative, she said.

On March 19, Code for Jersey City will be sponsoring a smaller hackathon at the Boys and Girls Club of Hudson County using public safety and health open data. Grigsby said she believed that between 30 and 40 people would be coming to work on these problems.

The group will be looking at what intersections have the highest propensity for traffic accidents, and on what days of the week and times of the day. They will also try to answer the question, “What impact does weather have on overall police activity?” Another question they’ll be working on is “Where should we stage police resources to create the shortest response times and distances?” And, finally, they will try to answer the question, “Is there a relationship between drug sale and use, or between violent crimes and vacant properties?”

On the health front, Code for Jersey City  members have also been speaking to the folks who run the EMT Intelligence Center at Barnabas Health, which is providing data to help them identify projects that can be developed from local data.

Last year’s hackathon, called the “PATH Data Jam,” focused on Port Authority data and attracted 110 participants. NJTechWeekly.com covered this event here. This year the group is dialing down the effort in order to put more emphasis on the National Day of Civic Hacking, later this year.

“We are putting all of our branding efforts into the National Day of Civic Hacking, in June,” to which the group hopes to attract 200 tech professionals, designers, developers, urban planners, civic society representatives, community advocates and students, Grigsby said. “We plan to have a soft launch of the Silicon Backyard brand,” and will present the idea to the mayor’s office, she added. “We really need to have a one-on-one with the mayor’s office to put in a plan behind this campaign.”

Grigsby gave us some updates on projects being worked on at the Code for Jersey City meetups. One project, by Anthony Townsend, involves a transit-bus-arrival-time product that he created for Hoboken. “Right now, it only shows Hoboken busses. He wants to expand it to Jersey City. He lives in Jersey City, but works in Hoboken. … In my conversations with the Jersey City Redevelopment Authority, they thought it would be cool to be able to predict bus arrivals,” Grigsby said. She added that Code for Jersey City would be working with the data and cleaning data for this project to help support it.

Another project being worked on is a Jersey City available-parking app that was developed by Aneesh Lal. “It’s an open source beta app that he created for Android. … He would love for the group to expand on it, make it available for iPhone and enhance it.”

Other team members are working on Jersey City tax re-evaluation data, to shine a light on where Jersey City is and where things are going for Jersey City property owners by using visualization tools. Member Brigid D’Souzais taking the lead on this project.

“When we see products reach their beta stage, and we see there is excitement and momentum around a product, we will reach out to possible funders as well as the departments and agencies in Jersey City to help support some of these products,” Grigsby told us. “We also want to get more visibility for those kinds of projects as well,” she said. Some of these projects may end up becoming startup businesses, she added.

Previous: How Panasonic North America CEO Joseph M. Taylor Helped Turn around the Company
Next: Much to Be Done To Make Internet of Medical Things a Reality, Goldman Says at NJIT