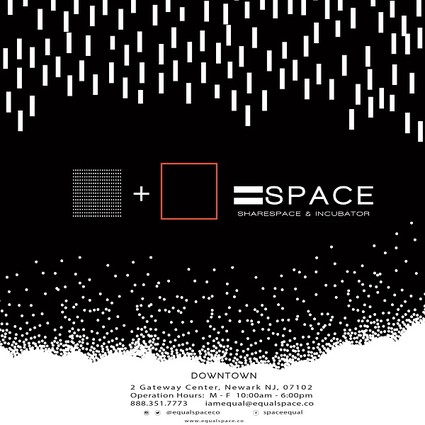 The Newark coworking spot  =SPACE is moving to the downtown Newark arts and business district, and will take its place in the 2 Gateway Center  building, collaborating with Gateway Project Spaces, a venue filled with art.

“We thought it would be a great idea to move Equal Space downtown, to be a resource that is so much more centrally located. It’s connected to Newark Penn Station, it has additional square footage and it also has separate rooms,” said Medina, cofounder of =SPACE, who prefers to go by this single name. Medina told us that he’s very excited about the move.

During the years that  =SPACE has resided at its current location, 89 Market Street (in the Max Blau building), it has been the scene of many tech events, including a Tech Town Hall with Mayor Ras Baraka in July 2015, that have helped to rebrand Newark as a tech city.

“We’ve always been close to the Gateway Project Spaces, with Rebecca Jampol and Jasmine Wahi [the co-directors]. They run a really great space. We were having a conversation about creating a unique culture where arts, creativity, tech and entrepreneurship all coexist. There is a lot of synergy between those industries,” Medina said.

“We thought about how to create that kind of place where creatives, whether they are involved in tech or art or whatever they are using, have a base to launch from. They had available square footage, and we explored how that would look. … We thought we could amplify both of our initiatives by joining forces.”

=SPACE will be engaging public spaces inside the Gateway Project Spaces art gallery, where people can stop and have conversations, Medina said. The facility has carved out a 2,000-square-foot space that will host membership-based desk spaces, a creative meeting space and private conference rooms with tech equipment and a design aesthetic that will “greet users with comfort, convenience and resources,” according to a press statement.

There will also be two huddle rooms where folks will have access to white boards, and of course, the space will have Medina’s design energy behind it. “One of our rooms will be covered with Astroturf,” he told us.

In a release,  =SPACE said that the environment will serve as a technology-driven workspace and a creative nurturing environment that will be both affordable and accessible. The company plans to open the new =SPACE, called “=SPACE Downtown,” to the public on Friday, Sept. 9, with a party.

=SPACE Downtown will be aimed at creative professionals, freelancers, writers, techies, startups, small nonprofits, commuting students and more. “The joint venture is an opportunity for =SPACE and Gateway Project Spaces to create an ecosystem of creatives of all types with the goal of growing within the city of Newark.” said Medina.

Wahi and Jampol noted in a statement, “We’re thrilled to bring another level of participants to our space. Gateway Project Spaces is currently the home to over 50 visual and performing artists from the surrounding areas. Developing a larger, diverse group of on-site creative professionals and cultural practitioners will continue to make Newark a destination to work, network and live.”

In addition to the memberships and new space options, the two organizations plan to work together on a series of programs that will cater to the community and on-site audience, the statement said.

Previous: Interview: Catching Up with Chris Sullens, President and CEO of WorkWave
Next: SPONSORED POST: After Years of Growing Ubiquity of Convertible Notes, a Return to Priced Equity Rounds