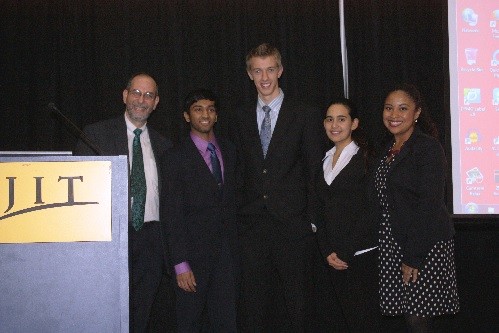 A system for recycling computers efficiently won the portion of the competition featuring entries from the community.

The winners were chosen from 14 teams of startup entrepreneurs, divided equally between teams of college students from Newark-based institutions and teams of community-based entrepreneurs, to present business plans at the competition held at NJIT.

Judges included executives from Capital One Bank, professionals from Newark-based businesses, local angel investors, and faculty and staff from NJIT.

Each of the seven winners (four student and three community track) will receive a $3,000 Capital One Innovation Acceleration Fellowship in the spring to fund their companies’ development over the summer, Michael Ehrlich, an associate professor of finance in NJIT’s School of Management and NJIT Summer Lean Innovation Accelerator Program’s co-director, told NJTechWeekly.com.

Fabio Arias of Caldwell, who presented the device, said his team was struck by the lag in technological improvements in basic navigation equipment and hoped to advance it.

“We still see most blind people walking with canes and dogs, indicating no real progress in navigation equipment despite advancements in technology. We felt it was time they had something better,” Arias said.

The primary winner from the Newark community was Omar Elmessalamy, an IT technician and adjunct faculty member at Essex County College, whose company, Elmes Recycling, is developing a system to direct a higher percentage of computer parts to recyclers and away from landfills, where they leach toxic materials.

Daniel Delehanty, senior director, Community Development Banking, Capital One Bank, said that “fostering entrepreneurship is a driving force for economic development,” and the bank’s partnership with NJIT is one way it supports the Newark community.

The finalists presenting at the event were chosen from nearly 60 applicants who submitted business plans for review in the initial round of judging. Of the four student finalists, three integrated sensors into devices to help in a medical outcome.

The winning student teams from NJIT include:

Previous: For the New Year, Entrepreneurs and Academics Offer One Piece of Advice to NJ Startups
Next: US 1 reports on Rosetta founder Chris Kuenne's new PE firm, Rosemark Capital Group