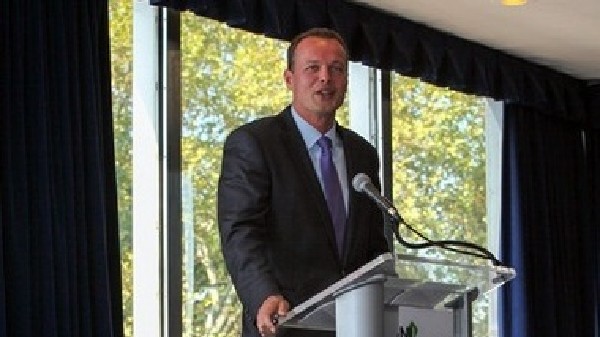 Simon Nynens is CEO of Wayside Technology Group, which has been approved for Grow NJ assistance. | Danny@customphotoshoot.com

This week, three tech firms were approved by the New Jersey Economic Development Authority (EDA) board for Grow NJ assistance if they choose to stay in New Jersey and create jobs here, according to a statement from that organization.

The Grow NJ Assistance Program boosts job creation and economic growth by providing tax credits that encourage businesses to stay in New Jersey. It is part of the New Jersey Economic Opportunity Act of 2013.

To qualify under the act, businesses must prove that the capital investment and the creation of eligible positions will yield a net positive benefit of at least 110 percent of the requested tax credit amount. The tax credit request has to be supported by CEO certification that existing full-time jobs are at risk of leaving the state or being eliminated, and that the job creation or retention would not occur organically, but only as the result of Grow NJ assistance.

There is no guarantee that these companies will decide to take the award once it is granted. Some may still opt to move out of state. The three tech firms approved this week for Grow NJ grants  are:

NICE Systems: Israel-based NICE Systems is a software solutions provider that enables organizations to capture, analyze and apply insights from both structured and unstructured data. The company’s voice biometric technology confirms the identity of legitimate customers calling a contact center and concurrently identifies sophisticated fraud attempts via this channel.

NICE Systems’ North American headquarters are currently located in Paramus, but the company is considering a move to either Hoboken or White Plains, N.Y, according to the EDA.  NICE Systems, which was approved for up to $22.8 million in Grow NJ tax credits over 10 years, is expected to create 200 new jobs and retain 140 jobs at risk of leaving the state.

SunGard Data Systems: SunGard Data Systems (Jersey City), a financial, public sector and educational software services company, is considering an expansion in Hudson County. It was approved for up to $8 million in tax credits over 10 years. The company is headquartered in Wayne, Pa., and recently announced that it would be acquired by FIS, known as a global provider of banking and payments technology and a leader in consulting and outsourcing solutions. The acquisition by FIS is expected to close in Q4 2015.

To gain more space, SunGard is thinking about moving from one location in Jersey City to another when its current lease expires, or expanding its existing company location in Jacksonville, Fla., according to the EDA.  The project is expected to create 75 new jobs and retain 160 jobs at risk of leaving the state.  The company has several other locations in New Jersey.

Wayside Technology Group: Located in Monmouth County, Wayside Technology Group, which provides computing products and solutions to corporate IT organizations, government agencies and educational institutions, is considering a move from its current Shrewsbury location in order to consolidate its headquarters and warehouse operations.

According to the EDA, the company is reviewing the options of purchasing an existing property in the section of Fort Monmouth that’s within the borough of Oceanport, or expanding a company location in Arizona. The project, which was approved for up to $2.6 million in tax credits over 10 years, is expected to create 35 new jobs and retain more than 100 jobs at risk of leaving the state. Wayside has strong ties to the New Jersey technology community.

A complete list of the companies that have been approved for Grow NJ assistance can be found can be found here.