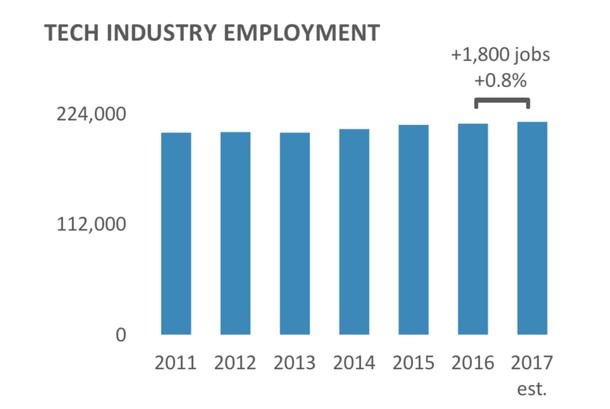 While the Cyberstates 2018 report, published by the Computing Technology Industry Association (CompTIA), had some good news for New Jersey, one piece of bad news for our innovation economy stood out.

“New Jersey’s Cyberstates Innovation Score places the state 11th, down from 5th last year. This ranking is based on a state-by-state per capita analysis of new tech patents awarded, tech startups and new tech business establishments,” according to a release from the organization.

Other states are clearly beating New Jersey when it comes to tech patents awarded, the number of tech startups and the founding of new tech businesses. We know that Governor Phil Murphy has a plan to remedy this, but NJTechWeekly.com would like to see this happen sooner, rather than later, before we lose more ground.

New Jersey has a rich history as a place where innovation happens, and we should try to maintain that leadership.

On the good side, employment in New Jersey’s technology industry expanded by an estimated 1,800 jobs in 2017, and the industry contributed $48 billion to the state’s economy. Frankly, 1,800 jobs is an adequate increase, but not the explosion of employment we would like to see.

We know of many tech companies that are poised to hire, but can’t find the candidates they need. New Jersey has to resolve its quality-of-life and taxation issues, so it can entice excellent candidates to either stay here or tempt others to move here, settle here and take jobs at growing tech companies in the state.

Many of our most innovative, fastest-growing tech companies have already received awards for the quality of life they offer their employees. They are among the best places to work in the state. But New Jersey should publicize this fact more than it does, so that people will start to associate the Garden State with both cutting-edge technologies and great places to work.

New Jersey saw a 71.1 percent jump from 2016 to 2017 in the number of job postings related to emerging technologies – such as the internet of things, smart cities, drones, artificial intelligence, machine learning, virtual reality, augmented reality, and blockchain, the report noted.

While these positions accounted for only a small percentage of the state’s total tech job postings, they’re an indicator of where organizations are headed with their technology investments, the report said. We believe that it should also be an indicator of what new skills members of the tech workforce should be learning.

Some additional stats from the Cyberstates 2018 report:

The Cyberstates 2018 report is based on CompTIA’s analysis of data from the U.S. Bureau of Labor Statistics, the U.S. Bureau of Economic Analysis, Emsi, Burning Glass Technologies Labor Insight, and other sources. Estimates for 2017 are subject to change as government data are revised and updated.

The full Cyberstates 2018 report, with complete national-, state- and metropolitan-level data, is available at http://www.cyberstates.org/.

NJTechWeekly.com welcomes comments on this or any of our editorials.

Previous: These are the 16 Best Tech Places to Work in NJ According to NJBIZ
Next: Chatham-based DriveWealth Raises $21 Million Series B Round

214 More posts in Opinion category
Recommended for you