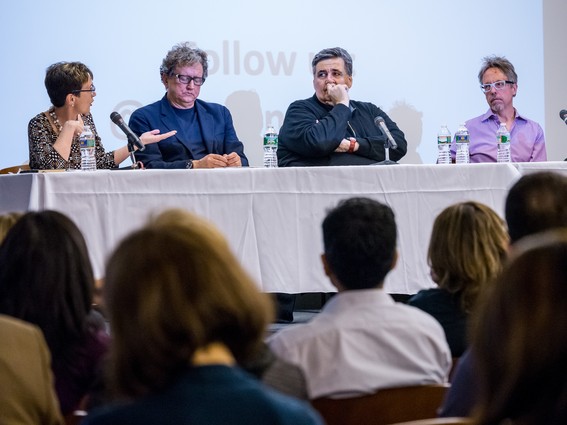 Panelists at the Not Just for Techies event | Mike Peters

“We can’t hire coders because all coders work in the city,” said Bone, voicing a common complaint.

Bone and other experts led a panel April 16, 2014, delving into New York’s technology boom and determining what New Jersey — where startup culture remains a work in progress — can learn from it. The panel discussion, titled “Not Just for Techies,” was attended by about 125 gatherers in University Hall, part of the Montclair State Entrepreneurship Meetup event.

Key to New York’s technological advancement are the nontechnological forces found in the city’s array of culture-related industries. Indeed, the panelists stressed the role of the humanities in fostering entrepreneurialism.

“At a time in which the humanities are often paired with words such as “death” or “crisis”, understanding the links of “Liberal Arts” disciplines to the tech start up environment offers a refreshing counterpoint,” Teresa Fiore, Inserra Endowed Chair in Italian and Italian American Studies observed. “From this frame of reference, critical thinking, aesthetic and ethical considerations, knowledge of foreign languages … are all essential to the growth of a vibrant and solid entrepreneurial ecosystem,” she added. “Tonight we are here to learn how the “two worlds” of the humanities and technology can be integrated,” she added.

Italian journalist Maria Teresa Cometto, co-author of “Tech and the City: The Making of New York’s Startup Community,” said the city’s emergence as a hotspot occurred after 2008, part of a strategy by Mayor Michael Bloomberg to diversify its economy beyond big banks after the financial crash. The term “Silicon Alley” — describing the city’s concentration of Internet-based startups — is now widely used after nearly disappearing following the dot-com bust of the early 2000s.

“In the last few years, the technology industry has become the second most important industry in New York City after financial services,” Cometto said, adding that technology is a leading job creator that “draws talent eager to work for startups rather than Goldman Sachs.”

Cometto said the city’s natural connection to the humanities makes its technology industry more than just a knockoff of Silicon Valley.

She added that most new businesses’ focus goes beyond gadgetry and software code; they use innovation to advance the city’s existing industries, such as media, fashion and the arts.

Media startups Buzzfeed and Business Insider — information sites that Cometto said are designed specifically for the Web and naturally suited to social-media sharing — were formed in New York City. So was Kickstarter, the provider of online crowdfunding platforms to support creative projects.

“When you start an ecosystem, it builds around industries that already exist,” said Alessandro Piol, a venture capitalist and co-author of “Tech and the City.”

“New York is a perfect place because it brings together technology and culture, and because it’s such a diverse city, the most international city in the world,” Piol said. “You need to have both sides of the brain working” when you start a creative business, he noted.

The spillover to New Jersey is not as robust. But Piol said New York’s expansion is bound to migrate west as the city’s entrepreneurial communities multiply.

“The obvious place to go is New Jersey,” Piol said. “I would expect Hoboken and Jersey City to benefit as expansion goes inland.”

One exception is Audible.com. The Newark-based seller of digital audio books and media is already growing, so much so that it was purchased by Amazon in 2008 for $300 million.

Audible CTO Guy Story said his company’s prosperity stems from nontechnological factors, noting the universal appeal of language and storytelling. Story says technology without humanities leaves audiences cold, while humanities can’t expand without aid from technology. With that in mind, the company is eyeing global expansion and tapping new cultures.

Now that mobile and wireless technologies are ubiquitous, Story said the trend bodes well for geeks and nongeeks alike.

“The time is ripe for these ideas,” he said. “The whole cultural infrastructure is in place for your ideas. I would say go for it.”

Asked what ingredients New Jersey’s early-stage enterprises need to prosper, Story replied that multicultural environments packed with creative energy are the best basis. Audible’s success in Newark is also helped by its access to fiber, Internet service providers, transportation hubs and proximity to academia, he said. Other speakers noted that Lower Manhattan’s connection to New York University is a big reason for the city’s success.

Bone said the Feliciano Center is developing more programs to foster entrepreneurialism among the state’s dense population. If only 5 percent of the 3 million or so residents in the state’s northern tip ventured into startups, Bone said, that would make a huge impact.

The event was co-organized and co-sponsored by The Theresa and Lawrence R. Inserra Chair in Italian and Italian American Studies, Department of Spanish and Italian, and the Feliciano Center for Entrepreneurship, at Montclair State University.