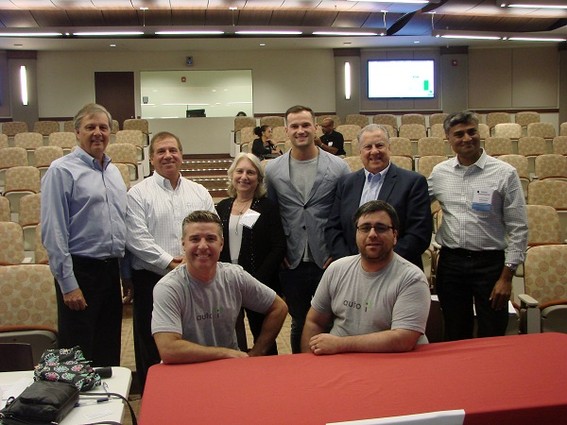 A New Jersey startup with an advanced motor-vehicle security system won the TechLaunch BullPen #5 event, held at Montclair State University on Sept. 19. Holmdel’s Auto i won both the audience and panel vote as winning presenter.

The event was hosted by TechLaunch (Kinnelon), the Montclair Entrepreneurs Meetup and MSU’s Feliciano Center for Entrepreneurship.

Mario Casabona, TechLaunch founder and CEO, opened the event by welcoming the attendees and explaining the process of selecting the contestant teams; he also mentioned that the teams had been receiving mentoring prior to the event.

The four teams — Auto i, Urban Nomadic (composed of MSU students), Teamium (Tinton Falls) and SocialLadder (Philadelphia) — made 10-minute presentations to an enthusiastic audience that was eager to learn more about each. This was followed by a 10-minute audience Q&A and questions and advice from the panel.

Altarik Banks and Josh Miller presented for Urban Nomadic, which wants to revitalize the fashion industry by creating the GeoBag, a fungi-based leather creation that is organic and eco-friendly, yet pollutant- and carbon-footprint-free. Miller asked by a show of hands how many in the audience owned a bag or belt made of leather or some synthetic material like polyester. Following the raising of hands, he stated, “Well, as it turns out, the fashion industry is the largest pollutant in the world.”

One panel member noted that the duo had failed to use their full 10-minute allotment, and said that that they should have used it all to provide more information. The panelist added that the team should have mentioned what they need as students to continue the business, what they want from the audience. Dollars? Mentors? Make that a part of the pitch, he advised. And he noted that Kickstarter would be a good way for this company to raise funds.

Another panel member recommended that the team focus on the business aspects when presenting to potential investors. The investors are going to want to know how the startup will make money. He also advised the presenters not to memorize: Just know what you want to say.

The second presenter was Teamium, a centralized Software-as-a-Service platform that enables video-production firms to source all their production needs with agility, cost effectiveness and precision. According to presenter Ashok Sharma, Teamium currently has 10 customers, and its goal is 220. The purpose of their product, said Sharma, is to save the customer time and reduce stress. The company’s target market is every video producer in business, starting with the small operators.

Some audience members were confused by what Teamium was truly offering, suggesting that the presenters had to clarify who their targeted customers are, what those customers do, and what solution Teamium could provide them.

A panel member who saw value in the product, said “it was hard to get there” due to the amount of information being viewed by the audience. He recommended that the presenters make a benefit statement early on. The panel also recommended that Sharma tell an actual story regarding Teamium’s benefits, adding that “emotions sells.”

Tom Santora, founder and CEO of Auto i — which offers an advanced vehicle-security system based on a 360-degree camera that sits under the rearview mirror and records everything — described how once his car had a big gash in the door, and that separately his wife was a hit-and-run victim. “We had two of the best car alarms on the market, and they did absolutely nothing. Why? When you hear a car alarm, 99% of car alarms are false alarms.” He then continued, “Auto i fills in the gaps where leading dash cams and car alarms fall short.” Auto i has 8.3 million vehicles in the inbound pipeline without solicitation, and it plans to be profitable in its second year by targeting the B2B sector.

One audience member complimented Santora’s excellent slide presentation, and the panel agreed, also liking the startup’s B2B approach to marketing. Another panelist suggested that Santora talk about the benefit of working with Kickstarter, given that the company had raised money using this crowdfunding route.

The next pitch was for SocialLadder, presented by cofounder and CEO Raavi Iqbal and cofounder Alana Bly. This is a self-service platform for building, managing and promoting live-event brands through ambassadors. The young company expanded beyond the United States in 2016, and is focused on building the best technology on the market. During the audience Q&A, Bly said that SocialLadder is not for 100% of the population, and that its true value is in the user’s enhanced experience.

One panelist warned the two cofounders against growing too fast, and another stressed that the company must make clear to potential investors who their customers are and how the dollars are getting shared.

Regarding this particular BullPen event, Casabona commented, “With each BullPen, we continue to see the myriad interests and opportunities which exist in our region’s bustling tech ecosystem. It’s a thrill and an honor to play our part in nourishing these startup dreams toward a reality. Congratulations to all the presenting companies selected, and especially to Tom Santora and his enterprising team at Auto i.”