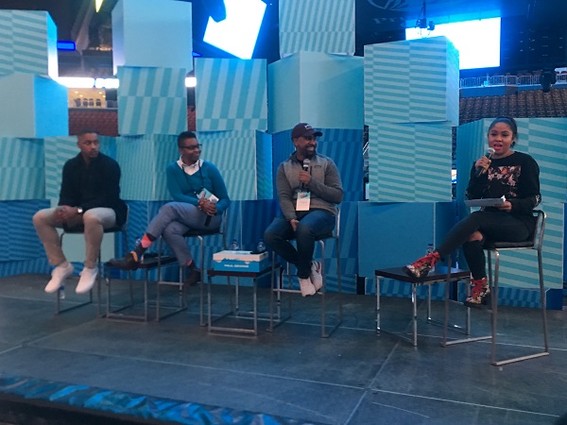 The Pathways to Success Opportunity Summit, held on February 27 at Newark’s Prudential Center and sponsored by the local branch of My Brother’s Keeper, brought together tech entrepreneurs at a panel titled, “Expanding Opportunity Through Technology and Social Media.”

Moderated by Angela Yee, a radio personality who cohosts The Breakfast Club a popular show on 105.1 FM  the panel discussed the challenges of taking a good idea to the next step on the way to fruition. “You could have a great idea, but until you put that plan into action, all it is is a good idea,” said Yee. “Sometimes, we don’t share ideas because we don’t want someone to take them. That’s why it’s really important to for you to have these skills yourself.”

The panelists included Ali Abdullah, Leah Gilliam and Jhamar Drew Youngblood. Abdullah is cofounder and CEO of Claim it! (Newark), an app that connects users with individuals or companies looking to give away free stuff. He describes the app as “Snapchat meets eBay.” The former Google software engineer and Harlem native moved the company to Newark last year. Abdullah says Claim it! received over 250,000 downloads from the Apple App store in less than two years after launching, and it ranks among  top 200 apps in the shopping category.

Gilliam is vice president of education and product development at Girls Who Code (New York), a nonprofit that works to increase the number of women in computer science. Some of its offerings include a seven-week Summer Immersion Program, two-week specialized “Girls Who Code Campus” program and after-school clubs. The goal is to inspire, educate and equip young women with the computing skills needed to pursue 21st-century opportunities.

Youngblood is cofounder and CEO of BlastChat (Newark), a mass communications app that he describes as being “like the bcc [function] in email, but for mobile messaging.” What started as a side project to simplify group communication about three years ago has grown into a service that’s also being used to help women and teens against domestic abusers and street attackers.

Find like-minded people and tune out naysayers. “My obstacle is just getting people to believe. When you get around certain people and you say [your goals], they look at you like you’re crazy or think that you’re too ambitious. Our whole thing has been really finding people that believe in our team, that we can accomplish our goals,” Youngblood said.

Look at what makes other companies successful. This came from Abdullah, who explained the importance of doing research. “That’s pretty much what’s done in business school,” he said. Study what works well and implement it.

Talk to potential users. This came from Youngblood. Your customers will be the ones using and benefitting from your products. Talk to them to learn more about what they want and what needs to be improved.

Maximize your available resources. Abdullah noted that there are a lot of resources for young techies and entrepreneurs in your city that you might not know about. He encouraged people to seek them out. Youngblood praised the power of self-directed learning on YouTube. “Everything I learned, I learned on YouTube,” he said. “It’s the best tool, and you can learn anything. There’s Harvard classes on YouTube, so you can learn what students at Harvard are learning without having to be there.”

Ask for a mentor. Don’t be shy about asking for a mentor, but be mindful about what you can do for them. Oftentimes, people want and want, but don’t try to offer anything in return.

Use social media wisely. Youngblood talked about using social media to his advantage. A feature that he likes to use is direct messaging on Instagram. “I found my cofounder and CTO that way.”

Previous: State Still Not Sold on Smart Metering for Utility Customers
Next: Marketing TECHniques: Telling Your Brand Story and Why it Matters