NJIT VentureLink Summer 2020 Startup Showcase, held on July 30, featured five student entrepreneurs with business ideas ranging from the development of a training grip for lacrosse sticks to the creation of a mesh network for small drones doing reconnaissance work for the military.

Tsavalas explained how the VentureLink entrepreneurial success program works. She said that VentureLink offers hands-on experience, education and coaching, all of which have been proven to help entrepreneurs succeed. This includes connections to other successful entrepreneurs and investors, mentor office hours with the VentureLink team and cohort-based programs like the summer incubator.

“Like many of you, COVID has forced us to be more virtual,” she said. “We decided to launch not only our first virtual program, but our first cohort-based training. This group of impressive students and recent graduates completed our eight-week intensive course focused on the fundamentals of entrepreneurship. That includes customer discovery, communications and messaging, marketing and sales and pitching to both investors and potential customers.”

The first Startup Showcase pitch was given by Nick Irwin, founder of SureFire Lacrosse, as well as a lacrosse player and mechanical engineering major at NJIT. Irwin designed a training grip for a lacrosse stick that allows new players to put their hands in the correct position every time. He explained that the mechanics of lacrosse seems unnatural to new players. The SureFire grip ensures that the top hand will stay in place on a stick as an athlete is practicing. “Every lacrosse coach will tell you that the top hand is the most important part in developing good mechanics because it gives the ball direction and speed as it comes out of your stick when you’re passing.” The grip will also help players develop good muscle memory, he said.

Next up was Yashwee Kotharie, founder of ReLeaf, a remote patient-monitoring system that tracks traumatic brain injury (TBI) symptoms. Kotharie said that every year 2.8 million Americans sustain a traumatic brain injury. About 41 percent of those patients will not get a follow-up visit with their doctor within three months, and only 2 percent of physicians’ time goes into communicating with their patients. “So, what does this mean? This means that patients are not getting the proper care that they need, and doctors are not able to efficiently communicate with their patients. And this is why TBI symptoms management needs to change.” ReLeaf tracks traumatic brain injury symptoms between doctor’s visits and provides continuous virtual check-ins, which will lead to better doctor–patient interactions, improved treatment plans and a better patient prognoses, she said.

Parth Agrawal pitched the CommonHealth Project, which during the height of the pandemic developed a decentralized model for producing and distributing face shields. “Our devoted network of 200 volunteers has assembled and delivered over 10,000 face shields to more than 40 facilities in just a few weeks,” said Agrawal, company cofounder and project coordinator.  “We are taking what we have learned successfully operating in five New Jersey counties, and expanding to other nonprofits.”

He recounted the story of his company’s response to COVID-19. Back in April, 91 percent of all healthcare facilities had less than a two-week supply of masks, shields and gowns. Agrawal and his team had a relationship with the Holy Name Medical Center, in Teaneck, as members of the family and some friends worked there. They were getting ready to use garbage bags as gowns and were writing their names on masks so they could reuse them.

“The good news was that, all around the state, the community responded. They fired up sewing machines and 3D printers. They made masks and shields in their basements and garages,”  he said. The volunteers got support from a Teaneck teacher who had several 3D printers in his basement. “We realized that there was one obstacle that all of these volunteer operations were facing, which was scalability.”

The solution was a community-driven decentralized production and delivery network for facial shield constructions. Volunteers would receive shield construction kits delivered to them by company drivers, who would later pick up the finished pieces and take them to donation centers. “Each county in which we operate is an autonomous region with a central dispatch manager, its own drivers and shield constructors, and shield drop-off locations. The unique aspect of our system is its scalability. All we need to scale production is to find a new volunteer” who can run his or her own autonomous region.

Andrew Elcock presented H2GO, a different kind of hydration product. Elcock is a student athlete and an industrial design major at NJIT, as well as the developer of H2GO. As an active person who camps and hikes with his family, Elcock has had a lot of experience with hydration packs. “The main problems I’ve had with hydration packs is that they’re always a pain in the butt to clean, and the water had a distinct plasticky chemical taste to it. And some basic customer discovery assured me that I’m not the only one who has experienced these issues,” he said.

“Our product solves this problem by removing the water reservoir entirely. H2GO features a universal valve that allows it to fit onto any off-the-shelf bottled water. This turns your bottle of water into a hands-free hydration pack with a single twist. While we’ve identified unique market opportunities for our bottled-water hydration product, we do realize that our larger target market is the environmentally conscious. So, our next product would be a variation that fits reusable water bottles. Our clear early adopters are those who own hydration packs. The hydration pack market alone was valued at $310 million in 2018, and is forecasted to grow up to about $780 million in 2025.”

The final presenter was Daniel Salib, cofounder of Volant, a company that is trying to make reconnaissance safer for soldiers on the ground. “We are building affordable drones that communicate through a secure and long-range mesh network. Now there are currently drones who aim to resolve this issue,” he said. “What makes our drones unique is their ability to extend the amount of territory over which they can communicate with us. This is done by passing data through a secure mesh network created by the drums.”

Salib explained that, for a “good way to visualize this, think of each drone in the swarm as a router. They work together to form a network. They share and pass information. This suddenly extends the distance to which a user will be able to receive live feed, but also adds a layer of redundancy, so that the failure of one or multiple units isn’t such a problem.”

During customer discovery, Volant found that the military is currently using drones that are expensive and need to be brought down and recovered. Searching for them wastes a good deal of time. Another problem with the current drones is the difficulty of replacing spare parts. Customers want to be able to 3D-print their own spare parts. They also cited the need for better communications, quieter drones, and additional infrared light. Salib said that Volant plans to enter the market first by applying for Small Business Innovation Research (SBIR) grants relevant to its product, in order to aid the funding and creation of Volant’s mesh network.

Previous: Hoboken-Based Noteworth Closes a $5 Million Seed Round during the Pandemic
Next: Future of Work is Now, Speakers Say at COMPETE Event

6 More posts in demo day category
Recommended for you 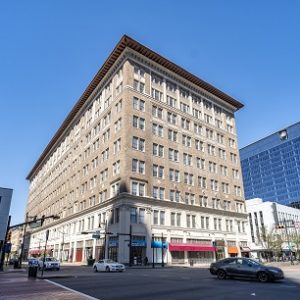