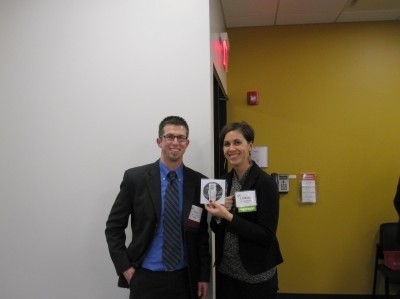 During the past couple of months, the New Jersey Technology Council (NJTC) held two regional events called Tech Ideas and Demo Days. Another will be held in May. The winners of these events will participate in a culminating event in August 2013.

While NJTechWeekly.com has covered many of the companies who presented at the gatherings, several others were new to us. Other startups had made big strides since we last featured them.

In this article we give readers a taste of two of the “new-to-us” companies that participated in the Jan. 29, 2013 Demo Day.

See a list of all the company participants at the January event here.

Watchful Software: At the January event that took place at DeVry University (Cherry Hill), we heard a presentation by Charles Foley of Watchful Software (Medford), a startup with offices in New Jersey and a development center in Portugal. Foley said his software will change the way enterprise users access their computer networks, replacing the need for old-fashioned passwords. “We’ve proven that’s not very secure,” he said.

And that’s not the only problem, Foley noted. Let’s say an employee signs in to a PC and needs to leave to go to the boss’s office. That leaves that machine unsecured, even though it’s password-protected. People just don’t sign out. That’s also a problem for most biometric protection, like fingerprint readers.

What if you could have biometrics that stay with you all the time? he asked.

Watchful Software’s advanced persistent solution depends on each person’s unique typing style. Behaviors like how quickly you hit the space bar after you type a period are measurable, said Foley. “Your speed, rhythm, tempo and cadence are unique to you,” he added. Those can be modeled, and compared.

Called TypeWATCH, the technology doesn’t require any hardware. It builds a “user fingerprint of how you interact with your system.” Once the profile is built, when a user logs on to a computer, the system constantly validates that that user on the system is the person who is supposed to be there and will shut down,  require a second-level password or do both if it suspects a break-in.

TypeWATCH can enable a system’s webcam to take a picture of the person at the workstation and send it to the company’s security department to compare with the user’s authorized photo. According to Foley, the firm can set up several alternatives for what it wants the system to do if it suspects a break-in.

False alarms are possible with this kind of software, Foley acknowledged, but the company has been able to increase its accuracy so systems aren’t shut down so frequently that they become an annoyance to users, he explained. He said a half-dozen companies are already using the technology.

Charity Gift Market: Charity Gift Market (Camden) CEO and cofounder Lindsey Markelz discussed her company, an e-commerce clearinghouse for items being sold by charities. The idea germinated during Christmas 2010, when Markelz and her husband, Andy, were buying all fair trade merchandise, many of which came from charities, for gifts. As they shopped, they wondered how many other consumers might be interested in shopping and purchasing from charities if they had the opportunity.

With a little research, they found that the market for gifts purchased from charities was actually $15 billion in product sales yearly. “We started building our website in January 2011 and launched in June 2011,” said Markelz. On the initial version of the site you can shop by product, charity or cause.

For example, said Markelz, “I know my sister has given to causes related to refugees, so I can shop by the ‘refugees’ key word. I found a candle set that refugees had put together.” Because every charity is vetted, Markelz said she knows the refugees were paid fair wages and used the proceeds to raise money for their ongoing work. Every purchase comes with a story card, so the gift giver can tell the story to the giftee.

Charity Gift Market checks out the charities that apply to be on its website, ensuring that they are legitimate and have no problems with the IRS. In the next version of the site, charities will be able to upload their product information and manage their products themselves. A final website page shows how many lives the charities are touching.

Said Markelz, “Right now we’ve maxed out our initial version of the website, and we really can’t scale with it. We are seeking angel funding to build out the technology. We want to scale to thousands of charities and millions of customers.”

The company makes money through a 5 percent commission on sales. It may bump that up to 15 percent when charities can have easier access to the site, said Markelz. “In addition, we’ll sell charity storefronts, so the charity’s products show up on their own websites. … A good number of charities have a store, but many don’t.”

In answer to a judge’s question about whether charities actually want their own stores, Markelz replied that the charity storefronts will work to replace storefronts on Etsy.com, which many charities can’t use any more because they are not the artist; they only represent the artist.

Markelz and her husband won the Seed Philly and Novotorium’s Not-a-Hackathon Summer Camp Sleepover in July 2012.

Charity Gift Market was the second-place winner of the Cherry Hill regional event.

The first-place winner was Edward Bailey of Illumination Machines, a Mount Laurel company that offers what it calls a better LED light bulb. Its newest product is aimed at disrupting the retail display lighting market.