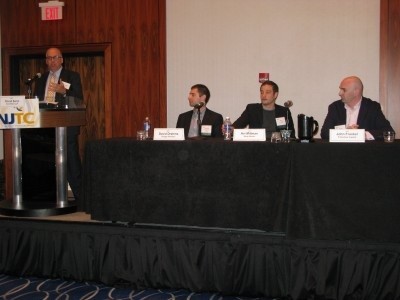 Panelists field questions from David Sorin of SorinRand at the NJTC Venture Conference in March. | NJTC

Entrepreneurs were treated to a candid assessment of the venture financing climate during a lunchtime panel discussion at the NJTC Venture Conference in New Brunswick on March 22, 2013.

One of the questions Sorin asked: While there’s a proliferation of incubators and accelerators making a lot of seed money available, how should you position yourself for Series A or Series C funding?

“The quickest way to be turned down is to not be growing,” said Stray Boots’ Millman.

Stray Boots, which launched in 2009 with the vision to turn urban exploration into a game, went through the Entrepreneurs Roundtable Accelerator (New York) in the winter of 2011, raised angel money and finally landed Series A funding in November 2012.

The process took much longer than had been expected, and Millman attributes that in part to his needing to learn how to tell the Stray Boots story in a way that had meaning for investors. So while he was working on the story, the company was forging ahead on the parallel path of building its business. The fact that users were paying for the service was a critical validation of the concept.

“No one writes you a check on the first visit,” said Millman, who emphasized the need to explain to prospective investors, using language they understand, how your business is going to produce returns. He said the biggest benefit of having been part of an accelerator was working on refining the pitch. “Learning how to tell your story takes a lot of training and practice,” he noted.

If you are rejected, find out why, advised Millman. Is it the market, the size or something that’s missing? “Adjust and tweak. Go at it with stubbornness,” he said.

“We say no to 99 percent of the people we meet, noted Frankel, who rejected Stray Boots as an investment but was impressed by Millman. He said he makes it part of the process to give feedback to anyone who pitches to his firm.

Great companies are sometimes turned down, Frankel noted. “In the tech world, saying ‘I’m an entrepreneur’ is now the equivalent of going to school. If you fail, you pick yourself up and go work for another startup. It’s the delusional optimism that permeates American society,” he said, adding, “All successful CEOs are mildly delusional.”

While he thinks the overall quality of business ideas is on the rise, Frankel said he still sees many of what he calls “Seinfeld ideas,” the kinds of wacky schemes that the sitcom’s character Kramer would burst into Jerry Seinfeld’s apartment to announce. “You want to do something important,” he said, something that will be worth doing for at least six years. “It’s the unreasonable people who see things others don’t, who are willing to pursue their dream.”

Frankel said ff Venture Capital invests in an average of 17 companies per year. In 2011, the firm made 23 investments; in 2012 it made 11. Since December 1, 2012, it has already invested in seven companies, two of which are at the term sheet stage. “We are focused on wealth creation, not exit,” he said.

“It’s not just about money,” Frankel insisted. “Our average investment is longer than the average American marriage. Don’t take money from people you despise … who won’t take your call. Do a deep background check. How do they deal with failing companies? Are they people you want to have a drink with, even if it’s just tonic water? If not, it’s taking money with negative side effects.”

Remember, Frankel warned, that “most VCs are incredibly time-short, [are] inundated with ideas and have the attention span of a 4-year-old.”

Drahms said he was shocked by the latest PwC MoneyTree survey showing that the number of software company financings has doubled since 2009. “Maybe the Series A funding gap is overstated,” he commented.

Osage Partners makes early-stage investments in mid-Atlantic businesses. It closed on a $65 million second fund in December, while ff Venture Capital is now raising a $50 million fund, its third.

Drahms recommended getting an introduction as the best way to connect with a VC. Use email and then call the office to reach Osage, he said, because all emails sent to his firm are opened.

Frankel also recommended a warm intro, perhaps through LinkedIn. An avid Twitter user, he once deconstructed an entire business model through a direct message exchange with a founder whose company ended up getting funded.

“If you can’t get to the VC you are trying to meet, are you really a CEO?” Frankel asked the audience. “We like people who are driven and find solutions to problems.”

The credit entitles any N.J. taxpayer who invests in an emerging technology company to a personal tax credit of up to 10 percent, with a cap of $500,000 per individual.