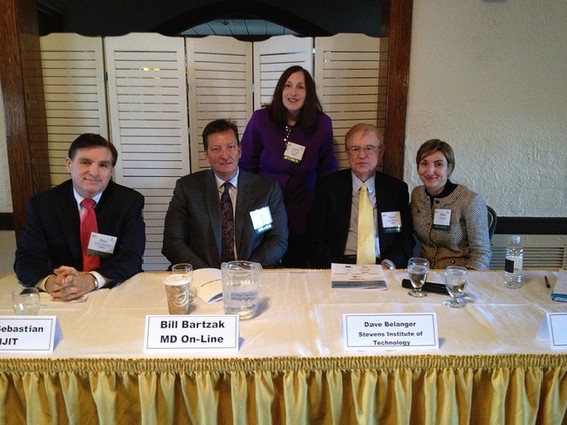 Big data’s benefits are real despite skepticism from the larger business community, according to panelists at the Dec. 12, 2013, New Jersey Technology Council (NJTC) Data Summit and Expo, held in  Ft. Monmouth, Eatontown.

Representing New Jersey Institute of Technology (NJIT), Donald Sebastian, senior vice president for research and development at the school, said when we talk about big data, a lot of what we are seeing is “old wine in new bottles.” Algorithm construction; faster, higher-performing algorithms; pattern-recognition algorithms; and so on have been around for a while, he said.

Big data lets companies and people make rational decisions in the absence of a physical model, Sebastian stated. The value is that we can now go from data to information to knowledge. “Now there is enough data not to fall prey to statistical variations and anomalies,” he said.

NJIT is parlaying big data into an organization called NJ-HITEC (Newark) that helps healthcare providers manage information. The goal is to make decisions logically, in the patient’s best interest and cost effectively, Sebastian said. “We have assembled resources that allow us to touch almost every physician in New Jersey,” he added.

The university is also involved in the Smart City movement via a Christie Administration mandate. The plan is to embrace the idea of information infrastructure via the Internet of Things. “Suppose we could have traffic signals that understood exactly who needs to go where and what the backup is and then reroutes them to avoid blockages and difficulties. What if signage on the street dynamically changed as you were walking down it? What if parking meters understood when there was a vacancy?” Sebastian asked the audience.

Newark and NJIT plan to be the destination where large and small companies can go to demonstrate how new ideas like these can scale, Sebastian said. It will be a place with wireless infrastructure where entrepreneurs who want to use sensor technologies can test their ideas. “We want to assist those companies in demonstrating and validating and getting their investments out of the deal,” he said. It is hoped that the companies will want to stay in the state and grow.

Also on the panel was Bill Bartzak — president, CEO and founder of MD On-Line — who discussed how his company, which was founded to eliminate the paper process between doctors and insurance companies, is turning to big data to offer services to physicians.

MD On-Line extends to 80,000 healthcare providers across the country and is on 47 major insurance carriers’ websites for physicians to use, Bartzak said. His company reaches smaller physicians’ practices — ones with five or six practitioners in the office.

“Today, for 80,000 providers, we know at all times what doctors are seeing what patients for what conditions,” said Bartzak. MD On-Line has acquired several companies so it can leverage the data it obtains to help educate doctors and help them educate patients in the latest advancements in medicine.

“This is really what big data is all about,” Bartzak said. “It’s about digging into the data, understanding what it means and bringing it down to an individual level. We make sure we are always compliant while we are using this information.”

Having acquired a medical continuing education company, MD On-Line says it can supply doctors with materials geared to specific conditions. Bartzak said that if someone leaves a doctor’s office with a blood disorder, MD On-Line can tell the doctor that there is a continuing education symposium on that topic within 100 miles of his or her practice.

He added, “We know clinical trial research. Trying to match patients to the proper trial can be like finding a needle in a haystack. We can make a doctor aware that there is a clinical trial available for a patient with a rare disease within a 100-mile radius of his patient population.”

In one example of big data use, MD On-Line was able to find patients with extrinsic asthma. Even though none had been identified by code, the company could look for patients with allergies and asthma. “We found over 10,000 doctors and over 80,000 patients, which told us that doctors needed to be educated on a new therapeutic solution for extrinsic asthma and needed to recall their patients to come in for a test,” Bartzak said.

Stevens Institute of Technology (Hoboken) professor David Belanger noted that now there are enough big data tools around for people who are not tool builders to execute large data projects. He said one of the best uses of big data is process control. Every business has a number of complex processes, and if it examines the details, it can find dollars to make improvements. “Companies should start by using big data techniques on their processes,” Belanger said.

Another area in which big data has proven itself is places where sampling used to be common. “Now you don’t do as much sampling; you do a lot of work with populations,” said Belanger. “That has changed how we look at rare events. For example, in using sampling you will miss fraudsters. But if you look at the population, you will see more of what is going on.”

Belanger said Stevens is part of the Big Data Alliance, a consortium of N.J. colleges and universities. “We are moving forward with a symposium in the spring and perhaps proposing some enabling legislation and cooperation between educational institutions,” he said.

“We are seeing an explosion in course curricula in data science. Stevens now has a master’s degree in business intelligence and analysis. This is one of our fastest-growing programs,” said Belanger.