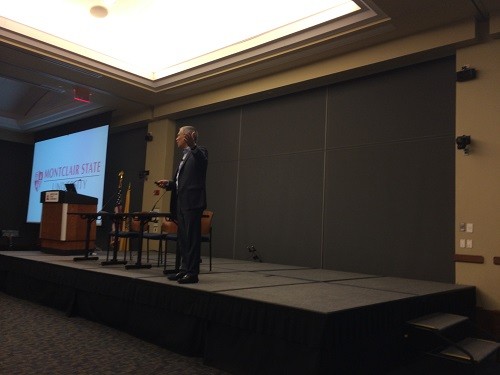 Disruptive innovation was on the agenda at Montclair Entrepreneurs Meetup Nov. 18, 2014, when Carlos Dominguez, futurist and vice president at Cisco Systems, told the audience that he wanted to change how they see the world.

“We are living in a moment of time that is radically different from anything we have seen in the past,” Dominguez told the more than 200 attendees who had come to the campus of Montclair State University. The meeting was moderated by Dennis Bone, the former president of Verizon New Jersey who now heads the Feliciano Center for Entrepreneurship at the university’s business school.

This is the most amazing time to be alive, Dominguez stated. Overall, people are living longer, earning more money and experiencing more time to enjoy life.

Said Dominguez, “At the heart of it all is connectivity. We are connected in ways we have never been before.” Understand that we are living in a hyperconnected world; the impact of that is important, he added.

Connectivity has lead to a world in which many ideas and products are changing rapidly, and people may feel as though they are not changing at a comfortable rate, Dominguez said. “We went from a world that was local and linear to [one] that is global and exponential,” he noted.

The economics of various industries, including music and retail, has totally changed in the past 20 years, he added, but there are still plenty of opportunities out there. Big companies can’t change very quickly, which is good news for both entrepreneurship and startups.

Dominguez went into depth about some areas that he believes are about to explode.

One is the Internet of Everything. “What is going to happen when we have sensors everywhere?” he asked. Think about how the information that sensors gather will save you money through optimization or earn you money through knowledge, he advised the audience.

In medicine, Dominguez said, there will be Internet-enabled medications that monitor how well they are working, while slippers with embedded sensors for the elderly will check their wearers’ gait.

According to Dominguez, sensors will be used for everything from letting parking meters know when spots aren’t occupied to detecting disease, much like the medical tricorder on “Star Trek.” He predicted that in a couple of years everyone will be wearing a computer.

Dominguez was especially convincing in his explanation of how 3-D printing could change healthcare. He talked about an ear that can be 3-D printed and implanted in a person, and a kidney that was being worked on.

Equally captivating was his prediction that by 2018 there will be primarily autonomous vehicles on the road. And people won’t have cars of their own; they will order a car that fits their activity for the day, he said.

“If I am going to the office and I’m no longer driving, I might want my vehicle to look like an office,” said Dominguez. “If I’m going out partying, maybe I want my bus to be a bar.”

He noted that there are challenges in a world in which cars and trucks drive themselves. For example, society has to think about the legal implications. What happens when an autonomous vehicle gets into an accident? he asked.

Dominguez suggested that entrepreneurs ask themselves how companies can remain relevant in this ever-changing world — that is, how do they not become obsolete?

His answer: everyone has to work at remaining relevant. “If there is one skill I ask you to think about, it is being adaptable. Don’t look for opportunities in only predictable places,” he said.

Also, entrepreneurs must be prepared for lifelong learning, said Dominguez. They will need to work at understanding technology, or they’ll be left behind, he said.

Dominguez advised the teachers in the audience to embrace change. “Learning [entails] being disrupted,” he said. “Don’t fight it.”