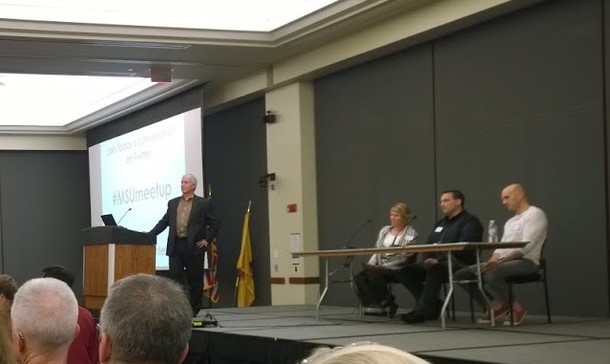 Panelists at the “do it yourself” economy meeting at Montclair State University.
| John Critelli

Brancaccio moderated a panel discussion on the rise of entrepreneurs, contract workers, and others making money outside of conventional employment.

Not surprisingly, many online companies, web-based services, technologies and platforms are a part of this new economy.

“It’s a great honor for me to come over to Montclair State,” Brancaccio said in his opening comments. He proceeded to tell the story of one of his own experiences with do-it-yourself work.

When Brancaccio was a teenager, he and his family moved to what was often described as “the island at the end of the earth,” Madagascar. The island didn’t have a radio station, so Brancaccio assembled a working radio broadcast system using a wood lathe, spare parts, and a cassette player.

Such at-home projects have become increasingly common with the availability of 3D printers and affordable computer components like Arduino microcontrollers. “Everybody in this room could buy an Arduino right now and make an electronics project,” de Vinck told the audience. “And I would say that 10, 15 or 20 years ago it was almost impossible,” he added.

Rising numbers of hobbyists and entrepreneurs are taking advantage of this technological progress to create things. This trend is frequently referred to as the “Maker Movement,” and its participants are often called “makers.” The rise of freelancers, contract workers, entrepreneurs and other independent professionals has also contributed to the emergence of  the do-it-yourself economy.

Pieri, a former industrial designer, explained the importance of tools like 3D printers to the shifting economy. She said products made with such technology would “be better than what we see every day” because large retailers currently control so much of the market. Speaking from personal experience, she added that such retailers have “stifled innovation.”

Pieri and her team members are very selective about the products sold on their website, preferring to carry items created by entrepreneurs in underrepresented demographics. They also prefer to sell items that reinforce certain values, like preserving handcrafts, protecting the environment, and creating jobs in developing regions.

“We’re taking things that used to be under the roof of really big companies, and making David have some of the power that Goliath used to control,” Pieri said.

This shift in the economy has also made it easier for women to become entrepreneurs. “On crowdfunding platforms, women achieve 47 percent of the completed projects—the successful projects—and they have a 65 percent higher likelihood of doing so than men,” Pieri said. She also said that she had seen more women participating in the do-it-yourself and Maker movements than in other tech-related activities.

However, Pieri later said that these movements would not realize their potential without platforms to support them. She pointed out that there are many business opportunities in the Maker Movement, even for entrepreneurs who don’t want to design products.

To compete in the marketplace, she continued, product designers need skills relating to funding, recruiting, law, finance, sales, retail relationships and more. If they don’t have those skills, they need to find people who do. “There are entrepreneurial opportunities here that are massive to support these companies,” Pieri said, “because in the aggregate they are a huge economic force.”

She pointed to businesses like NOWaccount, which manages the revenue-collection process for small companies, and Shipwire, an order-fulfillment and product-distribution business, as examples of services that are already supporting makers.

“Think about the things around these makers,” Pieri told the audience. “What would they need to succeed, and what kind of platforms could be built?”

There are admittedly several factors impeding the rise of entrepreneurship and stopping independent workers from reaching their full potential. Wald pointed to regulatory issues as one of the factors preventing more people from pursuing careers as freelancers.

He explained that the current system for taxing labor is a large problem because the shift from the W-2 labor model to the 1099 labor model generates a lot of government scrutiny of companies. This is because independent contractors using 1099 tax forms often underreport their income, creating an estimated $300 million tax gap. And many corporations are accused of misclassifying their workers when the government investigates these cases.

Pieri agreed that the need for health insurance is one of the biggest obstacles to entrepreneurship, but pointed out that there is also a lot of risk involved in traditional employment. “When you’re an entrepreneur, you know what the risks are and you have actually direct influence over how those risks are managed and addressed,” she said. Conversely, employees of large companies often face problems like layoffs that they may not even see coming.

Audience members were invited to ask questions of the panelists at the end of the discussion. The five people who addressed the panelists each received a gift from The Grommet, provided by Pieri.

Brancaccio closed the meeting by quoting a West African proverb: “One must come out of one’s house to begin learning.” Then he added, “Thank you for coming out of your house.”