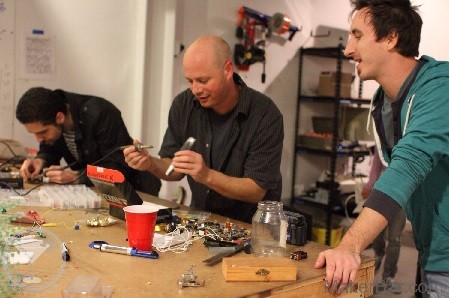 Two of MakerBar’s Founders, Zack Freedman on the left and Matt Williams (middle) working on an electronics project. Rich Jedrzejek (on right) looking on.
| Jonn Robinet

NJTechWeekly.com doesn’t often cover the “maker movement” in the state, except to discuss some of the great programs being put on at these venues where people can learn about anything from how to make their own computers to how to rig controllers so trains collide. We often feature these on our Events Page.

It’s important for the N.J. tech community to support these initiatives. As the Hoboken MakerBar organization notes: “We help develop practical knowledge of Science, Technology, Engineering, and Mathematics (STEM) by working with tools and techniques such as electronics, programming, 3d printing, traditional and computer controlled machining. Basically we make stuff.”

Actually “making stuff” is one way people become invested in supporting the tech community and a way that young people become hooked on tech.

We know of a couple of other maker spaces/hacker spaces in N.J. For example, Fair Use Building and Research Labs (FUBAR Labs for short) is a hacker space located in central N.J. The facility features a lounge, classroom, and workshop with lots of tools for making and hacking, including a laser cutter, lathe, mill, drill press, band saw, chop saw, 3D printer, mig welder, soldering equipment, electronic supplies, raw materials, expertise, and, organizers say, a fun atmosphere.

The Institute for Exploratory Research at 2201 Marconi Road in Wall, N.J. holds “Soldering Sundays” and “Microcontroller Mondays” among other events. The place has numerous Arduino shields and various displays to experiment with; Arduinos; Propellers; an FPGA (field programmable gate array) system; AVR Dragon (development tools) and AVR Programmers, and a library of microcontroller books.  Or, they say, users can design their own robot using the EDDIE robot development platform with Microsoft Kinect. The venue also has a well-equipped electronics lab.

We know also that some members of the Montclair Tech and Media Meetup are in the process of helping Montclair makers establish a MakerSpace there. Organizer Jon Bonesteel recently hosted an event to try to develop ideas for the venue. Those interested established a dedicated Google group to help advance the process. We’ve learned from a posting by Peter Kaplan that the Adult School of Montclair will be running the group’s first course, an introduction to the prototyping platform Arduino, starting April 4, taught by Kaplan and Reimer Mellin.

There is even a NJ MakerSpace Association and they have a complete list of N.J. maker spaces and even some in nearby Pa. on their website.

Now we are hearing that the Hoboken MakerBar is in the process of becoming a non-profit and is hosting a fundraiser March 27th at 7 PM to pay for its legal costs to do so. As the group said in its announcement:

The MakerBar is in the process of changing its IRS filing status to 501C3. Essentially this means that donations made to the organizatiom will be tax deductible after the filing has been processed and approved. This status will help the MakerBar evolve and ultimately allow us to offer improved facilities, shop equipment and education opportunities to the MakerBar community. Besides a mountain of paperwork (not fun), there’s a hefty filing fee that needs to be paid (not fun).

The fundraiser is being held at The Melting Pot in Hoboken and will cost $17 prepaid to enter, $20 at the door. Some cool items to be auctioned include:

Come out and support our neighbors, friends and STEM supporters at Hoboken’s MakerBar and help it evolve.

208 More posts in Opinion category
Recommended for you 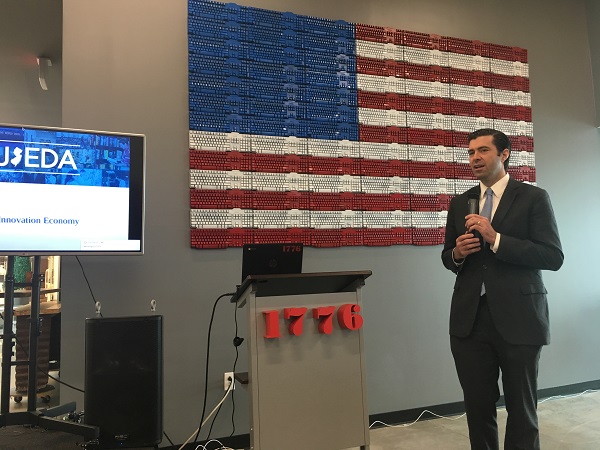 Each year I plead with the New Jersey startup community to take a look at...