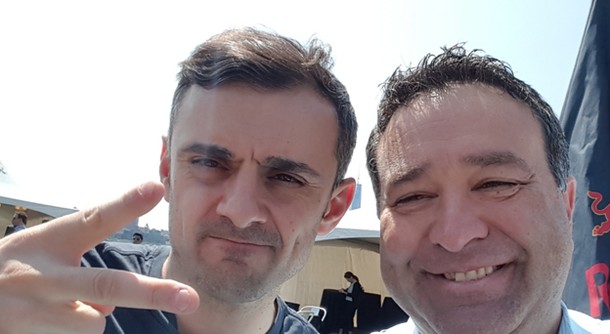 Henry Bestritsky took this selfie of himself with Gary Vaynerchuk at Propeller, the tech and entrepreneurship festival in Hoboken, May 20. | Henry Bestritsky

If you clicked on this story, you know of course that I am talking about New Jersey guy and uber New York Jets fan, Gary Vaynerchuk.  Like many of you, I first heard of him a few years ago when somebody said that I had to check out one of his YouTube rants. His high-energy delivery style made him come across as a mixture of Tony Robbins, Richard Simmons, Tasmanian Devil, and frankly, Chicken Little.  Now you may think that I am being insulting, but all four were pioneers in their space, made a lot of money, demolished obstacles in their way, and yes, even saved the world!

His YouTube page describes him as a New York Times and Wall Street Journal best-selling author, self-taught wine expert, and serial entrepreneur.  So a few weeks ago, when I saw him at Propeller in Hoboken, I asked him one simple question.  “Gary, you are no longer a wine guy and a businessman, you are a brand.  How does that feel, and is that what you wanted?”

Little did I know that I was being recorded by Gary’s team and my pieces of discussion were published on his YoutTube video blog called the DailyVee.  Please check out my brief conversation with him here.

What is the point is the way he answered my question.  Not only did he want to be a brand, but expected it with not a single doubt in his tired, smiling face.  His basic message is always the same.  You have to provide value, give 110%, and all of your business dreams will come true!

For this simple message, he is being attacked by quite a few people comparing him to a snake oil salesman and even worse, an annoying, condescending optimist!  Gary is not standing still and just taking it.  He is hitting back.

At his ICON 2016 Small Business Conference Keynote in April, he said the following about his fellow panelists on the social media circuit who are beginning to rise up against him:  “I go to conferences like this with them, they sit with me on stage; they spew their bull-crap because they want to make money on you, and when I get them drunk they’re like, yeah, you are telling the truth.  They can’t be my friends; I can only call them my acquaintances or my contemporaries.  They can’t be my friends, right?”  You could tell that he is hurt, and the question is, why?

You may think that it’s personal, but I don’t think so.  Growing up with eight people in one small apartment in New Jersey, you learn not to take anything personally.  He knows that these “contemporaries” may have been interesting seven years ago, but now they are just riding their fame and have stopped trying.  They stopped believing during the time when believing is so important.

He is hurt, because they refuse to see the future.  These are the people that he looked up to, laughed and drank with, were once the pioneers and are now becoming the pundits of an industry that is just now becoming completely accepted by every demographic.  An industry that is exploding and can make the right people a lot of money.  His eyes plead with them asking, what happened to you?

Speaking of money, I wrote about his basic approach to success, but it’s more complex than you may think.  He is in the business of making money and a lot of it.  He makes no qualms about wanting to buy the New York Jets, and he probably will.  He will do it by becoming a brand and selling everything through it.  Every keynote, every event, everything that he does is captured and carefully edited for maximum effect.  That, of course, becomes more content for his ever-growing voracious audience.

So, let’s take a look at how he makes the money on social media.  At ICON, he said that he is a “daytrader of attention”, and that all of his money for his clients is in Facebook Ads.  We use Facebook advertising for our clients at StrataBlue and are very successful.  With over 1.6 billion users across the planet, Facebook knows everything about you, and I mean, everything.  Check this story out:

Facebook is watching and tracking you more than you probably realize

I am not here to discuss Facebook tactics , but I am here to say that Gary has the talent of spotting the latest trend that can make him and his customer’s money, and hit it hard, really hard!  His does not care about Facebook, or Instagram, or Snapchat, or whatever cute name they come up with next.  He looks at the past and the present, and examines the hockey stick growth between the two points.   Leveraging this and his keen understanding of how we use technology and social media, he can predict where the next dollar sign will appear.

Being a brand allows him to spot multiple dollars signs and figure out which one is the most profitable, since he can use his brand and multiple social media platforms to test his theories.  For example, he has thousands of Snapchat followers while the platform is not able to truly give you the ROI on your investment.  He does not care, because as a brand, he knows that he can provide value through Snapchat, no matter what.  He is able to bet long and forget about the ROI.

It’s a big departure from where he was just a few short years ago as referenced by his current YouTube description.  “VaynerMedia has helped Fortune 500 companies like GE, PepsiCo, and Mt Dew execute against their KPI’s”.  At ICON 2016, he called the attendees not true marketers, but transaction peddlers, addicted to the KPI’s and ROI’s.  Times have changed.  That, frankly, is his core message.  Times have to change, and time itself is valuable as any currency on earth.

This is his approach to six-figure speaking engagements.  Each venue is carefully screened as he crafts his message exactly to what the attendees want to hear, or, more importantly, not want to hear.  He pulls no punches, using often hysterical shrills and expletives to kick the audience right in the gut.  He then points out that he is just the messenger often apologizing for being so direct.

At ICON, he called the audience transaction junkies, while at Propeller, a northeast regional technology/entrepreneurship conference , he told the attendees that China is about to eat every entrepreneur alive if they did not move fast.  The message is always the same: you have to move, move fast, never stop, work harder, and you will succeed.  I can definitely connect, since that is the immigrant mentality that made this country great.

Does he hide his approach from you?  Absolutely not, because he honestly believes that his existence, his energy, his often obvious advice will provide value.  That is not to, say that he does not provide gems; he just over-communicates to prove 3 or 4 key points.  I think he has to because he is trying to cause a fundamental shift in how you perceive doing business in social media.  It’s like that old game of Frogger; you have to constantly jump from log to log, or you will die.

He also admits that most of you will not be able to accept his message or even understand it, and that’s fine with him.  If you look at Vaynermedia at glassdoor.com, you will see that about 50% of employees like the company, but over 77% approve of the CEO.  You may not like or accept what he has to say, but you sure like the guy!  With regard to his company being at 50% on glassdoor.com, he makes no qualms about it.  It’s easy to hire, but it takes guts to fire, which creates churn.  You are either in or your’e out.  He is not running a beauty contest he is running a brand!  That’s the Gary “Vee”-Nomenon!

In conclusion, what most people don’t understand is that many decision makers over 40 feel alienated by the complexity of social media.  Some of them just got used to Facebook and are being yelled at that Snapchat is the future.  My kid just took a picture of me in Snapchat and superimposed it on my cat!  Now how does that relate to business?  If you think that’s hard, look three years into the future when Virtual Reality (VR) really kicks in.

I think Gary acts as a self-proclaimed trans-generational ambassador working hard to convince us that it’s ok to step into the water.  Just provide value.  You can take your iPhone with that amazing camera and just communicate what you feel, you will benefit your customers.  Just provide what you do best and human nature will take over.  We trust and buy from successful people that can provide value.  Are you one of those people?  Gary thinks you are and I agree with him.  After all, that is exactly what he does right now.  Why can’t you?

On a personal note, I will always remember from working at the liquor store that the cognac boxes were the hardest to break.

217 More posts in Opinion category
Recommended for you

Sounds like a scam, right? But it’s not. Each year NJTechWeekly.com pleads with the New...