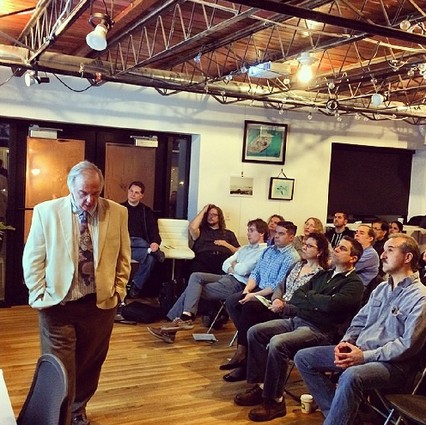 It was standing room only at Cowerks (Asbury Park) March 18, 2014, as an enthusiastic group peppered Stephen “Skip” Carter — director of the Rutgers Center for Innovation Education and codirector of the New Jersey Makerspace Association — with questions after his presentation there.

Carter was addressing Jersey Shore Tech Meetup about the potential for community makerspaces to become a vital resource for economic development, job training and entrepreneurship.

Many of the entrepreneurs in the room seemed to be on the verge of developing their own makerspaces.

Makerspaces drive innovation, Carter told the group, and he went on to discuss the various flavors of makerspaces that exist in N.J. today. There is a slight difference between hackerspaces and makerspaces, he said: while hackerspaces have a more traditional atmosphere centered on computing activities, makerspaces are more extensive and inclusive. The latter often include metalworking, laser cutters, electronics labs, textiles, woodworking and fabrication — almost anything you can think of — as well as 3-D printing.

Carter said he believes a market exists for makerspaces and that community makerspaces can be self-sustaining. More than 70,000 attendees visit the Maker Faire in San Francisco and the one in New York annually, which proves that the idea is here to stay, he added.

Carter asserted that makerspaces are not “about the equipment. They are about innovation. They are very diverse, serving many demographics with many goals.”

Rutgers became involved in the makerspace movement for a number of reasons, Carter said. Education and makerspaces share a good deal. For instance, makerspaces often earn money by offering classes in how to use the machinery they own or how to make particular items. The strategic thinkers at Rutgers see a link between the learning that occurs at makerspaces and the overall future of education.

“Some people think that 40 percent of universities will be gone in several years and the ones that are left are going to be irrevocably changed,” noted Carter. Rutgers sees makerspaces as places in which higher education and workforce training can be provided remotely with a hands-on, local component, he said. “We can’t achieve our strategic goals without you guys establishing makerspaces,” he told the group.

Publicly supported makerspaces show a lot of promise, said Carter. The idea has broken through the K-12 barrier, with libraries, for example, getting into the makerspace movement, he added.

The New Jersey State Library and LibraryLinkNJ recently partnered to launch makerspace projects statewide. LibraryLinkNJ is being provided $115,700 grants — increased from $100,000 — with contract awards ranging from $3,750 to $12,500 per library.

Projects have varied and have included partnerships with local schools, the arts community and local entrepreneurs, with a wide range of intended audiences and equipment needs. Some libraries, for example, are using the grants to develop and equip maker buses that can go to various locations in their community.

Libraries are good stewards of the maker movement in the K-12 age group because they are trusted environments, Carter said. While that’s a good start, they obviously can’t pursue projects that dirty their floors too much, he noted. However, they can still provide offerings such as 3-D printing, video creation and green screening for video production.

New Jersey vo-tech schools are seeing the value of having a social space, a project space and an innovation space alongside their machine shop and body shop. “At Rutgers we don’t want to … get an expensive 3-D printer. We want to get inexpensive equipment because that is what most people will interact with,” Carter said. “We have highly specific, highly targeted labs for science, but if you are a communications major and want to build a one-off project, it’s tough for you to get access [to them].” That’s why these spaces are taking off at Rutgers, he said.

Commercial makerspaces can achieve financial success, Carter stated. One such enterprise is TechShop, which has a location in Philadelphia. The business uses a membership model and charges for classes. People go there for the classes, and if they like the facilities, they end up joining on a monthly basis.

Most of today’s makerspaces have 3-D printers, laser cutters and Arduino microcontrollers, according to Carter. New spaces have been adding equipment for the fashion, manufacturing and renewable energy industries.

Rutgers is attempting to create a biology makerspace, Carter said, and trying to determine what equipment to furnish it with. The school doesn’t want to make it into a science lab, nor does it want the space to be too specialized.

The New Jersey Makerspace Association works with companies and utilities such as PSE&G for sponsorships, Carter said, but most want to sponsor particular programs, not infrastructure. There are a few exceptions to that rule, including Cognizant (Teaneck), which funds makerspaces — including one at the Newark Public Library — operationally.

“We are working towards community makerspaces that provide resources for the community but also work with the local hackerspaces to bring in very knowledgeable instructors,” Carter said. “We want to see that all in a clustered kind of community organization. We are seeing a lot of activity in the Camden area in developing a community network in that geographical location,” he noted.

Previous: HackPrinceton Draws 500 Students to Brainstorm and Build, but Not Sleep
Next: Jefferson Twp Students Awarded Best in Nation Prize for App Design