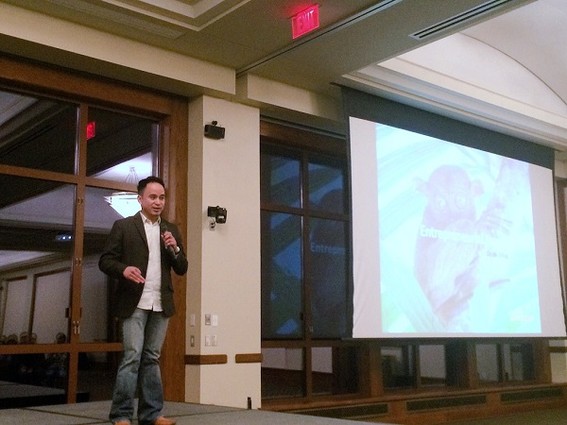 [At the Montclair Entrepreneurs meetup on March 4, speakers from three New Jersey technology startups gave students and members of the community accounts of their entrepreneurial journeys. For each one, this journey was unique. Here we present the third and final article, this one on Jason Vitug of Phroogal. Past articles covered Philip Kennard, of Futurestay, and Hani Shabsigh, of Inbox Messenger.

The Montclair Entrepreneurs meetups take place on the campus of Montclair State University, and are an offshoot of Montclair State’s Feliciano Center for Entrepreneurship. The meetup group, which has 1,500 members, is organized by Feliciano Center director Dennis Bone, along with two other associates of the Center, Jason Frasca (instructor and mentor) and Sharon Waters (program manager).]

The final startup founder to take the stage at the Montclair Entrepreneurs meetup on March 4 was Jason Vitug, founder and CEO of Phroogal. Vitug left Silicon Valley to bring his startup to Elizabeth, where he employs two people and is opening a 6,000-square-foot coworking space.

The original objective of Phroogal was to become the Quora of personal finance, to crowdsource financial knowledge using a question-and-answer platform. After pivoting, Phroogal has become the millennial generation’s trusted source for information about finance, empowering them to make better financial decisions.

The company is also partnering with financial institutions and other companies, distributing content and pointing its customers to financial products that will best help them achieve their goals, Vitug said. Phroogal is currently profitable.

Vitug told the group that, if they had asked him three years ago if he would be an entrepreneur talking to a group about his journey, he wouldn’t have believed it. “It took me a backpacking trip around the world to discover my passion, which has become Phroogal,” he said.

He started his professional life in the traditional way: You go to high school, you go to college, you graduate from college and you get a job. “That job is supposed to lead towards some happiness and success.”

After college Vitug did get the dream job, with Tyco Electronics (Princeton), in their credit union division on the west coast. “They [executive team] actually took passion over experience and hired me as a senior VP of marketing and business,” he said. “I grew that organization from $65 million to $110 million, and it was a sizeable accomplishment. … But after three and a half years of this, I felt tired and exhausted, and I really wanted to figure out what my passion was and what was my next challenge,” he told the group.

When Vitug told his CEO he was resigning, she was shocked because he was doing so well, he said, and the board of directors sat him down and told him that he was on the path to being the next CEO. He reconsidered, thinking that maybe this was his path: to be a CEO, buy a house, and settle down. He had lots of stuff: a motorcycle and cars, for example. But something was missing, and Vitug didn’t understand what it was. As he neared his breaking point, the company told him he could work from wherever he wanted and just fly in for board meetings.

In Dec. 2011, when Vitug was back in New Jersey, he began having panic attacks. He knew he wanted to be near his family here, and the challenge Tyco presented wasn’t something he wanted anymore. So he sold everything he owned and decided to decompress by spending some time on an island somewhere to figure it out. He had several offers from other financial organizations, so he knew he could return and find another a job if he wanted too.

The first country Vitug visited was the Philippines, and after visiting some family in Manila, he headed to Cebu, an island that is part of that country. Manila has big sky scrapers, but also great poverty, and seeing the poverty really affected him. He wondered what he was doing, giving up a six-figure income, when so many people he saw were starving. This triggered another panic attack.

In Cebu, he became the typical tourist, taking pictures, when all of a sudden everyone began running. “I thought it was a riot,” he said, but someone came over to him and said the words “tidal wave!” and he began running, too. Glad to be safe, Vitug discarded his plan of sitting on an island, and decided to see the rest of the world.

This was a pivotal point in Vitug’s journey, he said, because he would never have had his moment of entrepreneurship clarity if he hadn’t continued to travel.

A friend asked him to go with him to Myanmar, formerly “Burma,” a place with only one ATM. The two were told that they’d better bring all the crisp U.S. Dollars they could. Crumpled or ripped dollars wouldn’t be accepted, and foreigners couldn’t access funds from outside the country. Everyone there spoke English because Myanmar is a former British colony and the people he met thought that English was their way out of poverty.

The people in Myanmar believed that anything was possible, he said, and that the U.S. streets were literally paved with gold. He thought about the people he had met at the credit union. “I knew people who were making $250,000 and struggling with money, and others who were making $50,000, owned two homes and had $600,000 in their 401K fund,” said Vitug.

“As I considered this issue, I had an epiphany. I was sitting atop an eighth-century temple, looking at 5,000 pagodas and realizing I’m living my dream. I wondered how I could help others live theirs. That was the moment that I started formulating the idea that I wanted to create something that would empower people to live their dream lifestyle.”

Vitug told the meetup group that he wanted to live a purposeful life, and that he thought of entrepreneurship as a path to empowering a generation of millennials to make more-informed financial decisions, so they could live the life they want.

When Vitug got back from his travels, he started networking, meeting as many people as possible. “Silicon Valley is a different place from New Jersey. There is a lot of access to meetups and they are in a lot of places, including at Facebook and on the Google campus. I’d be sitting at a bar and someone sitting next to me would say something like, ‘Oh yeah, I just sold an algorithm to eBay for $3 million.”

He started blogging, and once he started blogging, he found “amazing” people who helped him and gave him advice. “Surround yourself with like-minded people, and you’ll be surprised at how supportive the tech entrepreneurial scene can be,” he noted. He was also building a community on his blog.

That community came through when Vitug began his $70,000 Indiegogo campaign. “We gave out T-shirts, sun glasses, and our supporters happily shared when they had received their goods, and helped us build our brand and solidify the community.”

He recalled being rejected by VCs and angels, saying that they had asked a lot of detailed questions he couldn’t yet answer. “They want you to get to a point that you are fundable. [Rejection] doesn’t mean that you’re not fundable,” he said. “It means that you are not at the stage that they are willing to invest their money.”

Vitug was recently honored with an Award for Entrepreneurship by the Urban League of Union County Young Professionals.