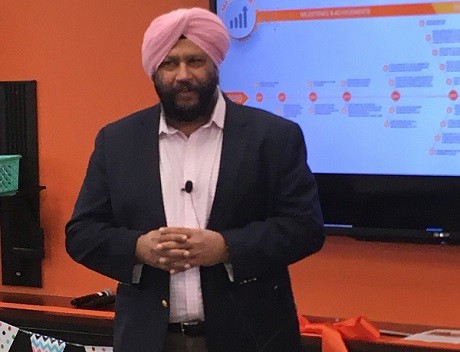 Axtria, a Berkeley Heights-based provider of data analytics and software for sales and marketing operations, celebrated the expansion of its headquarters in a ribbon-cutting ceremony on August 20, marking another milestone in the company’s impressive growth.

Axtria doubled the size of its headquarters to accommodate growth and make room for new employees, completing nearly seven months of work on the expansion project.

The company has 250 employees at its headquarters, accounting for nearly one-quarter of its global workforce, which extends to other cities in the U.S., as well as to the U.K. and India. The company’s services leverage new technologies such as big data, cloud software, predictive analytics and machine learning to enable customers to manage data designed to improve their sales and marketing planning.

CEO and co-founder Jaswinder Chadha told employees and visitors at the event that the company is poised to scale new heights in the years ahead, as more companies use Axtria’s services to spur their growth. “This expansion will support our vision to innovate and build cutting-edge solutions that will help global companies to effectively manage data and get insights to improve their customer engagement,” Chadha said. “It will serve as a place for our teams to collaborate, learn, grow, and contribute in a meaningful way.”

Axtria has indeed shown remarkable growth since it was founded, in 2010.

The company has posted between 40 and 50 percent in annual growth year-over-year, and expects that trend to continue this year.

That prediction is largely based on the company’s expanding into new markets with a planned rollout of its cloud-based software platforms in 120 countries, which is expected to double its licensed users to 60,000 by the end of this year. Axtria currently has more than 75 clients in the pharmaceutical, life science and retail industries in over 30 countries.

The company has received numerous accolades for its success in the analytics space. For three consecutive years, it was included in the Technology Fast 500 list, which is compiled by consulting firm Deloitte (New York) and covers firms in North America. Moreover, the magazine CIOReview listed the company among the 20 most promising pharmaceutical and life-science tech solution providers.

Jasmeet Sawhney, the company’s global head of marketing, said Axtria’s ability to grow year after year can be attributed to its making investments in innovation, talent and leadership a top priority. “We have created a culture that helps people learn, grow and succeed.”

Sawhney noted that Axtria is also fortunate in offering the right services at the right time. In recent years, more companies have moved their data to cloud-based systems like Axtria’s because security and data-ownership concerns have become less of an issue.

In a recent survey on cloud adoption released by research firm IDC (Framingham, Mass.), nearly 80 percent of the respondents said that they had at least one application or part of their enterprise computing infrastructure in the cloud. The IDC survey also found that these enterprises expect to spend an average $3.5 million on cloud apps, platforms and services this year.

Recognizing that an increasing number of competitors are offering cloud services, and that some of them are much larger than Axtria, the company claims that its competitive edge is its deep expertise in both the technology and the industries it serves. Sawhney pointed out that this has also enabled the company to partner with competitors on some projects.

Based on its ability to show double-digit growth annually, there is a good chance that Axtria will reach its predicted revenue goal of $250 million by 2025. As Chadha said, “It’s going to be an amazing journey for us.”