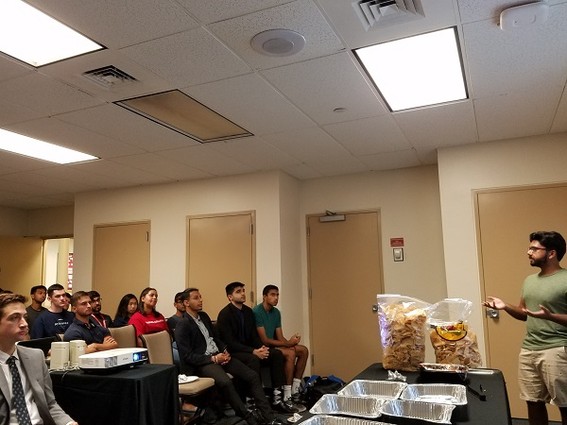 Students and entrepreneurs probably don’t know that Rutgers has a Venture Capital Club that exposes would-be VCs to the world of venture capital and educates entrepreneurs about what to expect in their funding journey.

NJTechWeekly.com conducted an interview with the current president of the club, Maya Ravichandran, and former president Bernie Adorino, to get up to speed.

According Ravichandran, one of the key goals of the club this year is to increase gender diversity in its membership and bring in more female speakers. That’s not surprising, given the widespread criticism that the venture capital world does not have enough minorities or women in charge of funding decisions. The club is also looking to get in touch with more STEM students, especially those who might not have a natural affinity for business, but want to learn more.

“We’re for anyone that wants to diversify their skill set, said Ravichandran. “We want to connect people with ideas to those that can help them find the funding. Anyone with a business, or who wants to learn more about venture capital, can find the club informational and useful.”

Students can use the Rutgers VC Club to get a better understanding of the business world, develop important networking skills and establish important contacts. For instance, Ravichandran herself is a computer science major who wants to start her own company.

The Rutgers VC Club focuses on helping its members establish a network among those currently working in venture capital. The students learn that to forge strong business relationships, they must be authentic. According to Adorino, some friendly networking advice is, “Don’t just reach out to reach out. Have a purpose. Go in with an ‘ask,’ so the conversation is more directed. Everyone is more than willing to help you because they’ve probably been in that situation before.”

When done right, VC funding can create quick and healthy business growth. VC money isn’t for every business, but if “a company can’t bootstrap anymore, and has already reached out to family and friends, or other angel investors, then they can begin looking at funding from VCs,” said Adorino. “It all depends on what trajectory the founders want the business to follow.”

Companies can and should get in touch with potential VCs even before they’ve plateaued their current revenue stream and network, and are ready to expand. VCs commonly look for such things as a “strong management team, growing customer base, consistent growth,” he added. “Does the company manage their cash flow properly? How much more funding will they need in addition to what they have already raised? Is the company efficient?”

The club has visited VCs in New York. Ravichandran said of the experience, “I remember one particular thing that struck me was at the VC firm headed by Zander Farkas. We asked what made a company founder good. He said, ‘someone who is completely dedicated to their company and wants to see their dream come to fruition. They are obsessed with it.’’’

A mistake founders can make, however, is to see VC funders as stepping stones. “Regard them as a person to get to know, instead of a pawn,” said Ravichandran. The golden rule is that you should always prioritize engagement.

The club has been active for only a year since it was re-registered in 2017, but it has already attracted such speakers as Clark Smith, a senior venture officer at the New Jersey Economic Development Agency; Jason MacDonald, director of investments of the Rutgers’ Endowment; and Eric Tarczynski, founder of Contrary Capital (New York). It has also heard from Jonathan Reynolds, an associate at Edison Partners (Princeton).

The club has helped students make valuable connections. When Smith spoke at a club meeting, Ravichandran had a chance to talk to him afterwards. Smith went out of his way to help connect her with an internship at Vydia, a fast-growing startup in Holmdel. It is also worth noting that a former vice president of the Rutgers VC Club, Del Giannotti, is currently an analyst at Edison Partners.

Still, a common misconception is to think that VC funding is always like “Shark Tank,” the popular show featuring cold investment pitches in which the sharks/investors have no prior knowledge of the companies. In real life, VCs do a great deal of research on companies before the entrepreneurs ever get to pitch. “Shark Tank” episodes are heavily edited, and “they’ll agree and shake hands after the pitch, but that doesn’t always lead to an investment. There’s a very small statistic of actual investments in companies. The sharks do ‘due diligence’ on the company after the show,” said Adorino.

VC funding has been around for nearly 40 years. “It picked up in popularity in the ’80s and boomed in ’90s, leading up to the tech bubble,” said Adorino. “Over the last decade, it has been incredibly easy for anyone with a decent track record to raise funds. That has led to inflated valuations for companies just because there’s so much money that needs to be put to work, and the competition for deals is so high.”

For those interested in learning more about VC funding, check out the club’s web page. Or, find them on Facebook at Rutgers Venture Capital Club. The next meeting of the club is Monday, September 17, 2018 at 7:00 pm in room 111 of the Livingston Student Center.