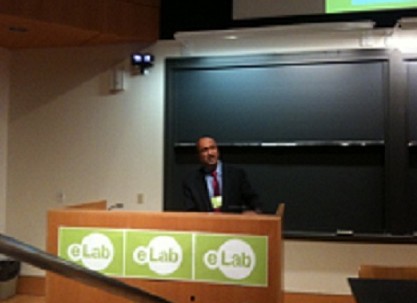 Mid-August was a busy time for the startup ecosystem in the Princeton area. All in one week, Tigerlabs’ first summer accelerator held its Demo Day, Princeton University’s Keller Center eLab presented its first student demonstrations and Princeton Tech Meetup featured a demo night for members. In upcoming stories, NJTechWeekly.com will discuss all the great startups that gave demos of their wares in mid-August.

NJTechWeekly.com attended the inaugural eLab Demo Day on a rainy August 15, 2012. The accelerator was hosted by the Keller Center of Princeton University, which, according to Sanjeev Kulkarni, director, was established to educate leaders in a technology-driven society.

Speaking at the demo day, Kulkarni was effusive about the tech startup ecosystem developing in the Princeton area. “I think we have the key ingredients to make this area Silicon Valley East. We have the capital, ideas, human capital and supporting infrastructure. Also needed are interactions among all the elements.” While much is going on in Philadelphia and New York, “we think Princeton is also uniquely positioned to be a part of that ecosystem,” he said.

eLab students benefited from the advice of mentors, speakers and advisers during the 10-week program, and each team was provided four to six mentors. Advisers helped select the students for this first accelerator and assisted the teams in rehearsing their pitches.

Two companies who presented were focused on making the world a better place.

Arielle Sandor, a graduate of Princeton’s history department, and Christine Blauvelt, an anthropology graduate, gave an engaging presentation on their company, Duma. Other team members include Eric Kuto, a computer science (CS) graduate, and Luke Paulsen, a junior in the CS department.

Duma is a text message-based job-matching program for emerging markets. Blauvelt explained that in emerging economies like that of Kenya, much of the workforce depends on short-term service jobs ranging in duration from one hour to a day. Yet when a job opportunity comes up, people have no good way to find out about it. Very few have Internet service in Kenya, but 28 million use SMS messaging. Word of mouth is slow and inefficient, and by the time the job seeker and provider are matched, the opportunity may be gone. “We believe that very lost opportunity to earn income is unacceptable,” Blauvelt said.

The solution the team proposes is simple. A job seeker would sign up for the service via text message and list the names of friends, relatives or even former employers who can recommend him or her. Someone offering a job would do the same. In the case of an individual who needs a ride, the system finds someone who is socially connected to both the driver and the person needing the ride. The matching takes place in real time.

At the time of the eLab demo, Duma was in the second round of beta testing in Kenya, using a local team to conduct focused group discussions to determine how the system works on the ground. Several Duma team members who already have experience in that country are moving there to get the company up and running. If it works out, the team plans to expand to other countries that depend on short-term labor markets and have access to SMS.

Another socially oriented startup pitching at Demo Day was MyGZpoints, represented by Trevor Wilkins, a rising senior in the sociology department. MyGZpoints is designed to help change the culture of education. Every 26 seconds someone drops out of school, Wilkins said. MyGZpoints wants to reward students for going to school, participating in extracurricular activities and getting good grades. Under the system, students who do well would be rewarded by points, entered into the system by the school and then redeemable for online certificates the students can use at local stores.

The business model increases visibility for local businesses among 12- to 18-year-olds and promotes foot traffic to the stores. MyGZpoints has signed up schools and businesses in two geographical areas to test the product and see how it works in the real world. Besides Wilkins, rising junior Benjamin Hazel (sociology and African studies), rising junior Malik Jackson (politics) and political economics graduate David Seijas make up the team.

Focusing on the e-commerce space, Wantwarrior is a company headed by Jason Silver, a master’s candidate in public policy at Princeton’s Woodrow Wilson School. Silver said the idea for Wantwarrior came to him when he wanted to buy a car with specific features and knew how much he was willing to pay. Finding the precise car he needed was an excruciating process, he said.

“Wantwarrior takes a specific need and matches it with the optimal provider of that need,” said Silver.The typical Wantwarrior buyer is willing to wait for the right item but doesn’t want to have to keep going through ads, eBay listings and websites to find it for the right price. The company plans to charge a fee for matching buyers with sellers. Wantwarrior’s team includes Andrej Risteski, a first-year CS grad student; George Okeowo, a junior majoring in CS; and Madeline Lu, an electrical engineering grad student.

Intellectual curiosity spurred the creation of Dewey, which presenter Peter Zakin, a 2012 graduate with degrees in philosophy and CS, said is an electronic library for digital material users want to reread or think they might find useful. Most items read on the Web have a very short life span, Zakin said, and even if you do want to refer to them again, it can be difficult to find them.

Dewey is envisioned as both an easy-to-search personal library and a place to share what you’ve read with others. “There’s really no other place on the Web where you can share your intellectual life,” Zakin said.

Further, a commenting platform will allow users to highlight passages and comment on and interact with high-quality content. “Our users can leave their own personal mark on their readings,” Zakin said.  His team includes Minqi Jiang, a graduate who studied CS and creative writing, and Arman Suleimenov, who received an M.S.E. in CS from Princeton and a B.Sc. in CS from Purdue.