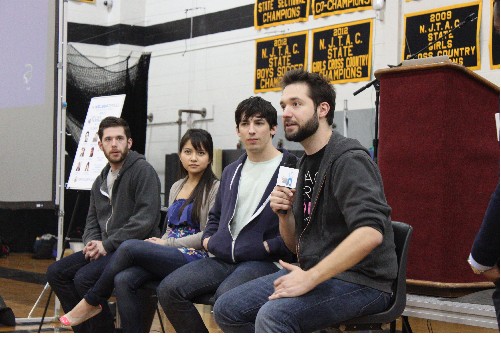 Since he created one of the most popular websites in the world, one would think reddit co-founder Alexis Ohanian is not easily impressed by much.

However, the high school-aged organizers and participants at hackBCA, a 24-hour hackathon at Bergen County Academies High School in Hackensack on Saturday, March 22, 2014 awed the serial entrepreneur.

“I’ve been blown away because we didn’t have anything like this when I was in school,” Ohanian said during a panel discussion. “I get invited to a lot of hackathons. I was so floored with the moxie of the organizers … they were like, ‘We’re going to call it the biggest high school hackathon ever and it’s right outside your hometown.'”

Ohanian served as a judge at hackBCA alongside other startup founders such as Colin Kroll, co-founder and general manager of Vine; Rebecca Garcia, co-founder of CoderDojo (New York); and Mattan Griffel, co-founder and CEO of One Month Rails.

The judges said they were first made aware of the hackathon after receiving an email from hackBCA’s main organizer, Jared Zoneraich.

Kroll said it had been about eight years since he participated in his last hackathon, and that much has changed since. “When I was at a hackathon we were trying to piece together PHP script; it’s come a long way.”

Since all of the judges are startup founders, they elaborated on what the startup culture is like for each of them. Two themes common amongst the panelists were the stress and rewards of maintaining and growing a startup.

“It’s amazing and it’s stressful at the same time. The coolest thing about doing a startup is the freedom — and it’s also the scariest part that there’s no rules to follow. And once you get it, it becomes addictive,” Griffel said.

Kroll mentioned one of the hard truths in the startup space: Success is not guaranteed.

“I’ve started a bunch of startups that have met various fates,” he said. Failure, he said, is not something to be afraid of. “I’ve learned a lot from each (business).”

Despite their past failures, the panelists remain passionate about their chosen careers. “In the eight years since graduating I have never not looked forward to my day,” Ohanian said. “I genuinely love and have had the privilege of being able to work on things I love and problems I want to solve every single day. And that is a tremendous gift, and it’s something not a lot of people get to do. It’s the privilege of waking up every morning and having that opportunity. You guys already have a head start, so keep it up.”

Garcia touted the uniqueness of the startup scene where technology can be intersected with a multitude of fields. “For example, you can start a tech fashion startup. Anything you’re passionate about can be combined with technology.”

Later on in the discussion, the panelists spoke directly to the hackathon participants in the room. Kroll emphasized one word of advice: “build, build, build, build.” He said what kept him programming was enjoying building something that people can use. “Build and launch as many things as you can and see if people interact with them.”

Griffel praised the participants for taking the first step already by attending a hackathon. He added that failure is nothing to be afraid of. “All the successful companies you hear about are messing up all the time. So don’t be afraid to make mistakes. It’s okay to mess up sometimes.  As long as you’re doing something valuable then people will forgive you,” he said.

Another bit of advice was the importance of collaboration.  Through venues like hackathons future entrepreneurs and engineers can foster this important skill. “Sharing ideas and building things together. I think that collaborative spirit and effort is not something to pass up,” Garcia said.

Ohanian concluded by saying that there has never been a better time to be a part of the tech industry, and that those who participated are already ahead of the pack. “Those that will succeed in the 21st century are the creators, the makers, the ones who are doers,” he said.

He also spoke to those at the hackathon who are not looking to program, but who still want to get involved in the startup scene. “Even a historian — I was a history major and a little scripting can go a long way. Find your communities, find people who will support you and challenge you to make you better.”