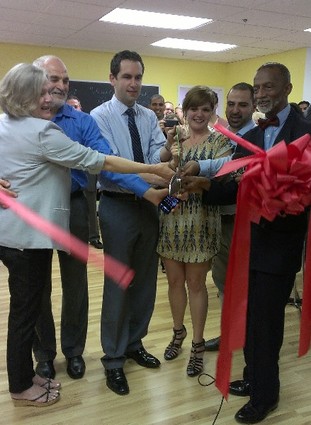 The ribbon was officially cut at Indiegrove, Jersey City’s new coworking space opposite the Grove Street PATH station, on May 23, 2013. Some 100 entrepreneurs, innovators and  others turned out in the pouring rain to celebrate Zahra Amanpour’s creation of a place for them to work and grow.

Coworking spaces are considered a must-have ingredient in a tech ecosystem, since startup companies can grow from very small to having several employees within their walls, all while rubbing elbows with likeminded entrepreneurs.

The 6,000-square-foot Indiegrove has enrolled 38 members since it opened on Jan. 2, 2013, at 121 Newark Street in the Historic Downtown Special Improvement District. One member is Hoboken resident Chris Ducey, now running his fourth startup, PocketbookVoters.com, a political commerce app.

Ducey said he was attracted by the high-quality look and feel of the space; the equipment, like a color printer, that eliminates runs to FedEx Office; and the conference room for investor meetings. He has a private space for six that costs $2,000 per month, all services included. (Membership options start at $225 per month.)

“It’s a great office space, and Zahra is the most well-adjusted person I’ve met in my life,” Ducey said. It was a no-brainer to take the space, he added, because of the flexible terms of 10 days’ notice to vacate. In his three previous ventures, he’d had to negotiate three-year leases to get favorable monthly rates.

Another tech company, 3 Phasecomputing, relocated from founder Jerry Altzman’s Brooklyn basement to join the Indiegrove community. The company does everything from small-office setups to full-sized data center buildouts and from small software installations to large, complete, from-scratch software projects.

Not all the companies at Indiegrove are in tech. Member Iris Cinematics had shot a video about the coworking space that aired for the first time at the event. Immigration attorney Rudy Rodas had operated from his apartment before Indiegrove, where he found a community of other Rutgers Law School grads and made connections with professionals he said it would have taken much longer to find otherwise.

The space also drew roofer and tech entrepreneur Mark Nejmeh, who travels to Indiegrove from Bradley Beach to spread the word about the energy-saving and roof-preserving properties of sustainable planted green roofs. The proliferation of flat roofs convertible to living space, and influencers such as journalists and architects, make the neighborhood an attractive target market, he explained. Nejmeh is also involved with the new site Nujobi.com.

Founder Amanpour brings to the venture a seemingly endless supply of energy, a vision to create a hub for all things entrepreneurial, an MBA in international business and substantial experience working with entrepreneurs. She was executive director of business solutions program management at the NYC Department of Small Business Services and before that had worked at the Workshop in Business Opportunities (New York), a nonprofit focused on developing entrepreneurs in underserved communities.

“I think coworking is such an effective way to build communities and strengthen businesses and get people to where they really need to be,” Amanpour said in an interview the day after the party. “I’m doing this to create a hub for entrepreneurs, a place where they can come and be comfortable and focused … and feel like they are part of something bigger than themselves.”

Among the workshops offered to all Indiegrove members is one on business finance basics, including how to crunch the numbers and perform basic cash flow and break-even analysis. Amanpour teaches it. She also serves as a resource on a daily basis, coaching members in how to build businesses that are sustainable for the long haul.

Amanpour wrote a business plan she believed in and quit her New York job in July 2012 to start Indiegrove. She was rejected by every bank she turned to for financing and finally obtained a $50,000 loan from the JCEDC and a $25,000 one from the GNEC. She raised the remainder of the $150,000 needed from her own funds and a loan from her parents, Joanne McIntosh and Mehran Ebrahimi.

At the ribbon-cutting, Amanpour thanked her parents for teaching her to embrace nonconformity, integrity and hard work.

It cost Amanpour $100,000 to renovate and build out the space, which had been a dark, dingy gym, on the top floor of the building. She has already hired an office manager and support staff, and hopes to break even soon. Her goals are to see the space filled by the end of the year and to expand.

“There is a demand for meeting rooms and offices that I can’t meet. I’ll have to decide whether to expand in this building or look elsewhere,” she said.