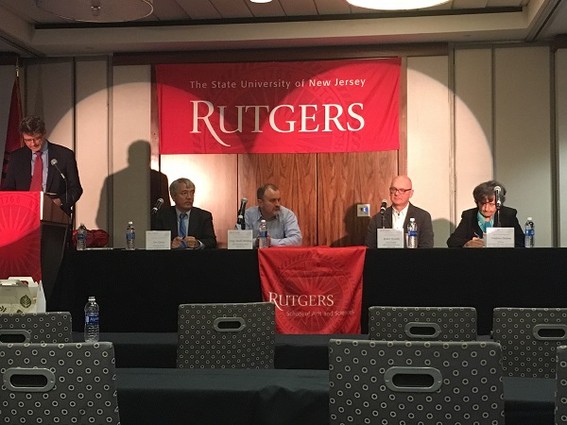 Panelists talk about ideas that could help shape Rutgers CS program in the future. | Esther Surden

In 2016, Rutgers held two celebrations of its achievements in computer science. One, a symposium at the Hyatt Regency New Brunswick in October, feted 50 years of computer science at Rutgers. The second event, in December, celebrated the future, with a focus on “Caliburn,” the university’s newest supercomputer.

The October event featured talks and panel discussions about the present and future of computer science at Rutgers.

Darema’s office oversees much of the grant money that is given out for basic research in computer science, she said. However, anything researchers do must eventually have some impact on the civilian sector. During her talk, Darema emphasized the importance of multidisciplinary research teams for advancing computer science.

For many years, Darema has been talking to the computer science community about the benefits of reaching out to and understanding other disciplines. “I’ve even suggested that, as part of the curriculum for a computer science degree, candidates from the undergraduate level and on” should be exposed to another discipline, such as engineering, applied math, physics or chemistry.

A panel made up of all the presenters discussed ideas that could help shape Rutgers’ computer science program in the future. Peter March, executive dean of the Rutgers School of Arts and Sciences, was the moderator. He asked the panel to discuss research ideas that lie just beyond the horizon, and to think about underexploited opportunities for collaboration, “not with the usual suspects like medicine and engineering, but the unusual suspects, like arts and humanities.”

Darema noted that autonomous systems are currently an important area of research, and that there are challenges in integrating the human and engineering aspects of this research. Machine learning and data analytics for system understanding are another important area, she said. Darema also reiterated her belief in integrating multidisciplinary teams for the study of computer science. “This is also important in transferring methods from one field to another.”

At the celebration of the new supercomputer, Caliburn, speakers lauded the new directions in their research that they attributed to their use of this resource.

In his introductory remarks, Christopher J. Malloy, senior vice president at Rutgers for research and economic development, said that the credit for Caliburn should go Manish Parashar, distinguished professor of computer science at Rutgers and founding director of the Rutgers Discovery Informatics Institute (RDI2), who led the effort to build the system; and to Ivan Rodero, RDI2 associate director for technical operations and associate research professor, who designed the system, including its unique architecture and capabilities. [NJTechWeekly.com covered this in detail here.].

Malloy noted that Caliburn was built with a $10 million award from the New Jersey Higher Education Leasing Fund. The lead contractor was High Point Solutions, of Sparta, which was chosen after a competitive bidding process. The system manufacturer and integrator was Super Micro Computer, Inc., of San Jose, California.

“From the beginning, Caliburn was designed to be a state-wide resource,” Margaret Brennan-Tonetta, associate vice president for economic development at Rutgers, said at the event. “As you know, research computing is essential to every discipline, every sector, every government agency, and how we function basically as a society.”

She added that making computing power of this magnitude available to researchers in the state would allow them to become more competitive, and would enable them to do research they wouldn’t have thought possible without finding similar resources elsewhere.

Rutgers will be able to attract top-notch faculty because this kind of technical resource will be accessible for their work, she said. And students will be able to train with and use a world-class computing system. “They will be very much in demand in terms of career options,” she told the audience.

“For industry within the state, this will be a game changer,” she said. “Every industry sector now needs to have access to advanced computation, big data analytics and the types of resources you only hear about at a university.”

The supercomputer will help the state retain businesses she added. “This really puts New Jersey on the map in terms of being a leader in advanced computation and big data analytics.” Brennan-Tonetta noted that Caliburn gives Rutgers that ability to grow industry partnerships and collaborations across all sectors.

Parashar pointed out that, from the beginning, RDI2 wanted to make Caliburn unique. “We wanted to have a resource that meets the needs of our scientists and students here at Rutgers. We wanted to have a system that was forward-looking. … There was a movement moving towards exascale computing, which is the next frontier in computing.”

Exascale computing systems will be capable of at least one exaflops, or a billion billion calculations per second.

Parashar continued, “We tried to balance innovation in architecture [and] technology with meeting the needs of scientists and allowing them to innovate.”

Previous: Perfecting Your Startup Pitch
Next: Technology Marketing in the Digital Age: Using Twitter? Here’s how to grow opportunities for your business