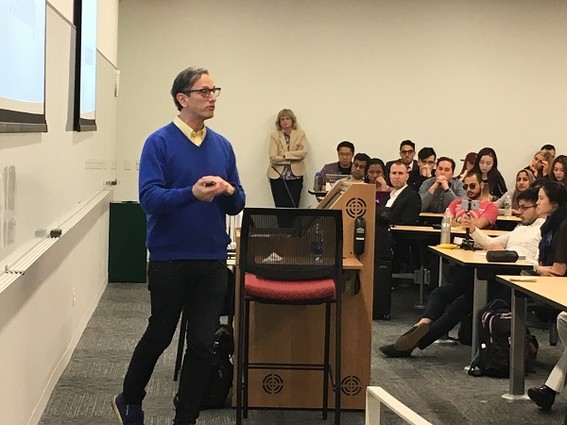 Speaking to a standing-room-only crowd that included students and tech community members at the Scarlet Startups meeting last week, Richard Harris, cofounder and CEO of Intent Media (New York and London), offered advice and a wry take on the venture capital scene.

Here are some of the points he made:

Once you build a marketplace out, you can have an infinite number of buyers and sellers in it. You don’t have to acquire buyers and sellers by yourself, using labor-intensive sales forces. Similarly, venture capitalists (VCs) like software businesses, including those specializing in Software-as-a-Service (Saas). Back in the day, you might have had 100 people writing the code for Excel or some other software. If you sold only ten of them, that cost a lot of money. But if you sold a billion software packages—and back in the day, that only involved sending out a CD-ROM—the incremental costs were low. Today, with SaaS, the incremental costs are nearly zero.

When a VC sees that your business requires an elite sales force in key markets, he’ll hesitate. VCs want to put their money to work, and they want it to spit out massive amounts of value. If a business is going to require more and more capital, more and more employees or more and more raw materials, that’s a risky proposition. If you are Elon Musk, maybe you can pull it off; but, otherwise, you’ll burn through large amounts of money.

Where to Find VC firms

VC firms are made up of small groups of people, maybe as many as ten. They all know each other and they are all competing with each other. They are basically in three cities: San Francisco, New York and Boston. New York City is getting better and better for venture capital, but it tends to have smaller or early-stage funds. Boston still has a good amount venture capital available. It was the hardware and software tech rival to Silicon Valley through the ’70s, ’80s and ’90s.

The VCs all get together in a few bars in these cities. If you want to raise venture capital in the San Francisco area, and I’ve done this many times, you literally drive down this one road called “Sand Hill Road,” in Menlo Park. Every VC firm is there, in the strip malls. They are the least impressive offices you’ve ever seen. There is one hotel at the end of Sand Hill Road, and that one hotel has one bar. If you go there, you’ll see the VCs all conferring with each other about what the hot deal is and what the hot trend is. They are always trying to identify the hot scoop. They are also comparing deals and hot entrepreneurs.

How to Break into the VC’s World

How do you break into that world? Well, it’s networking. That is the one part of what I want to tell you that is not easy. There is no solution to networking except getting out there and being fearless and networking. If you try to develop your network, however, do it authentically. If you start building a network at the exact moment that you need something from someone, that sucks. If your business is about to run out of money and you show up to Starbucks in San Francisco trying to raise some money, and you have three weeks left, they’ll smell it on you. If you try to reach out only at one particular moment, it will feel inauthentic and people will think that you have an ulterior motive for talking to them.

How to Build a Network

Start building your network right now. Figure out what you have ideas about and what you are passionate about. Start talking to people who share those ideas or that passion. Start talking to people who can introduce you to other people.  When people realize that you are actually passionate and that you have some idea about how the world could be different, and you just want to talk to people who are also authentically interested in that thing, they will realize that there nothing you want from them except to talk about ideas that are interesting. That’s how you build a network.  And it’s never too early to start.

When you actually go out to raise capital, if you just find the email address of a partner in a VC firm and email them your pitch, the odds are one in 10 million that it will turn into something productive. Always get a warm introduction. When the introduction comes through a business or social network, you are already pre-vetted. VCs hear 500 pitches a week. If they decide to sit down and meet with someone, they want to know that the hour that they spend with you will be the best use of their time.

The Partner Is Always More Important Than the VC Firm

Many entrepreneurs make this mistake: They want to raise money from the hottest firm out there. They think that if they raise money from Sequoia or Andreessen Horowitz, how can they fail? Those guys are so smart. Well, you can fail just as easily. If your idea sucks, you will fail. If you don’t work hard, you will fail. It doesn’t matter who bought your story. Different firms do have different levels of access in different industries. That is one thing. However, the partner is always more important than the firm.

I found that out the hard way. You can have a great firm with a partner who can make your life hell. I always advise people to go ahead and choose a firm. Look at the Forbes Midas List, which includes all the best VCs, and that’s great.  It’s great that a VC firm has a good track record of funding great companies. But remember that the partner is the person that you will be literally married to for the next X years of your life because they will be on your board. They will either give you good advice or bad advice. They will either be supportive or make your life hell.

Choose that partner very carefully. It can be very hard when someone you don’t like at a sexy VC firm says, “I love you and I want to give you money,” but you know you don’t like them, know you won’t get along with them, and know that they could actually damage your business. It’s like dating someone who is really beautiful, but you hate them. It never ends well. No matter what stage you’re at.

Previous: Building a Secure Database for Patients' End-of-Life Plans
Next: Verizon Tests Drone That Can Deliver 4G LTE Coverage After Power Is Knocked Out By A Natural Disaster