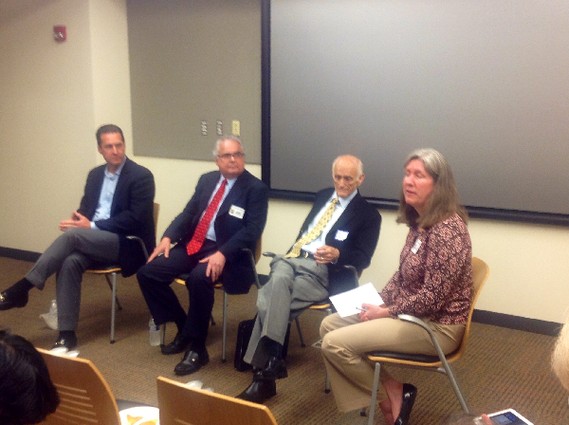 A trio of startup entrepreneurs who had successfully grown their own companies came to the Launch NJ: Life Sciences Hub meeting at the Technology Centre of New Jersey on May 18, where they discussed the theme of “What, When, Why & How: Growing science-based companies.”

The panel was moderated by Caroline Hoedemaker, of tTAp (Princeton), an accelerator for medical life-science technologies.

The panelists at the event were:

Michael Behr, founder of CD Diagnostics (Claymont, Del.), a company that develops and manufactures immunoassays for joint fluid. He established the company in 2008, building it up from the concept through the acquisition of over $6 million in a Series A round before successfully exiting.

Each panelist gave advice about how to build a successful business.

Rich told the audience that startup founders need to understand that the business they start out with isn’t the one they’ll likely end up with. The business will evolve because there’ll be many adjustments along the way.

In building his company, Rich said, he simply didn’t understand the value of marketing and just how important it was to explain who you are and what you do.  Once he was able to put those concepts into words, most business came by word of mouth rather than through a sales force.

Hiring the right people is important, too. Rich’s first hire was a young woman from across the street.  The next was a technologist who allowed Rich to work on the company rather than in it.

For Rich, hiring people had been a shot in the dark until he implemented profit sharing (10-15 percent), but it still remains difficult.  Although money is a motivator that brings people in, the prospect of being part of a team is also a strong attraction.

Rich’s final piece of advice was to let the market decide what your products will be.  Because he did just that, the company developed a reputation for being able to do anything in fiber optics, which was a marketing message that he embraced.

Hutchins started his bioinformatics company because he thought it was sexier than financial services. He began as CEO until he was able to hire someone “smarter than him” to take over.  For Hutchins, the initial barriers for his startups were limited financing and the lack of a clear direction, which hiring a CEO helped overcome.

Initially, the company tried to please too many customers, he told the audience.  So he took a chance and looked for a customer who was a thought leader in the industry. He went to that customer and said that he wanted to be partners, rather than just have a relationship between supplier and customer.

According to Hutchins, he no longer begins a company until he has the core team in place: unique people of character and integrity with different skill sets.  He also advised startups to give away 5 percent or more of the company to create an advisory board that would act as an involved consultancy. He said that this would be a great investment.

Behr told the audience that he had an advantage in that he had partnered with a thought leader from the start.  This was important because, as he admitted, he initially had no clue what he was doing.

Behr received two bits of advice early on in his career that turned out to be invaluable:

This was almost exactly what happened to him, and having that information up front made the reality easier to handle.

Behr told the audience that he strongly believed in two principles:

1) Giving out equity brings credibility, while at the same time giving people a stake in the company.

2) Don’t be afraid to bring in people with expertise. You don’t need to know it all.