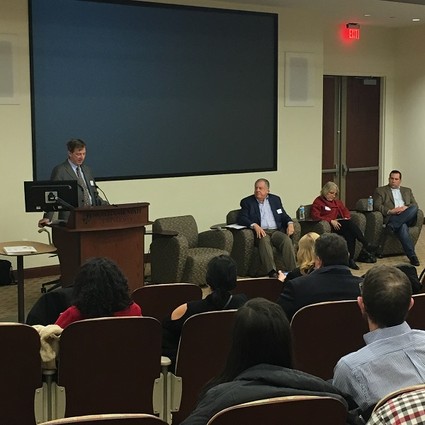 The panel on the current state of funding at the Montclair Entrepreneurs Meetup. | Dillan DiGiovanni

The Montclair Entrepreneurs Meetup hosted a panel of funding experts at its most recent event, held on February 13 at the Feliciano School of Business, Montclair State University.

The meeting – titled “Latest on Startup Funding: What’s Changed? What’s Still Hot?” – attracted a large audience that included all ages, stages and identities, who came to get tips about the current funding climate in New Jersey.

After pizza and casual networking, the conversation began with one-minute pitches from the audience, with Sharon Waters, co-organizer of Montclair Entrepreneurs, making sure that students were given priority.

Socolof’s opening remarks indicated that the current venture capitalist (VC) landscape includes about 1,000 firms, even though only 500 VC firms had survived the dot.com blowup and financial crisis 10 years ago.

Several drivers have contributed to steady regrowth, including the impact of innovative technologies on every aspect of life; the development of open-source software and open-innovation practices; the growth of the “gig” economy, with its greater entrepreneurial mobility; and the ease with which companies can get started, thanks to cloud technology and globalization.

The size and power of the major firms, such as SoftBank (Tokyo, Japan), can be threatening, especially if they rush to fund a startup or company in the early stages. “We try to make companies earn their stripes, we have to be smart about how we invest,” said Mastrobuoni.

Proving company viability for funding was an overall theme of the evening’s discussion, including various ways to nurture leadership and relationships.

“There is a strong correlation between women angels and the women entrepreneurs who get funded,” said Zief, whose firm has 282 members, adding 70 new ones in 2017 alone, and has raised two funds of 30 million in committed capital.

“Diversity in management leads to better returns,” she said. Women still aren’t the major decision-makers but things are changing. “You want women deciding for everyone, not just women-owned businesses.”

Casabona said, “I prefer to nurture long-term relationships” over speed-networking events that match entrepreneurs and investors. But Socolof disagreed. “I love speed-dating,” he said. “If the event is well-curated by the organizers, I don’t need to invest more than five minutes.”

Mastrobuoni referred to the importance of communication and relationships: “Change is good. But when you pivot, call your investors.”

All the panelists offered their expert advice on seeking investment partnerships. They suggested that vetting should happen both ways. “Just because an entity has money doesn’t mean it’s a good fit for you,” said Zief. Casabona weighed in by advising the entrepreneurs in the audience to “be the owner of your company.” Mastrobuoni recommended that they gauge VC character and behavior from the outset. “If they are difficult to work with from the beginning, they will be later,” he explained.

Doing research before reaching out to funding entities is invaluable. Review investor portfolios and ask questions of entrepreneurs who have already received money from those investors. Zief advised being careful about what you share, to protect your intellectual property; and Mastrobuoni said that social media impacts investor reputations, making them more accountable.

What about crafting pitches for initial funds? All three panelists agreed that funders like companies that can set and meet clear milestones. Too many entrepreneurs present business plans with unrealistic projections and timelines, and then don’t meet them. Getting through year one and demonstrating viability should be the focus.

Previous: Vydia Raises $7 Million “Series A” Round and Plans to Bring More Jobs to New Jersey
Next: IT Centralization Review Among New Jersey Committee's Recommendations for New Governor