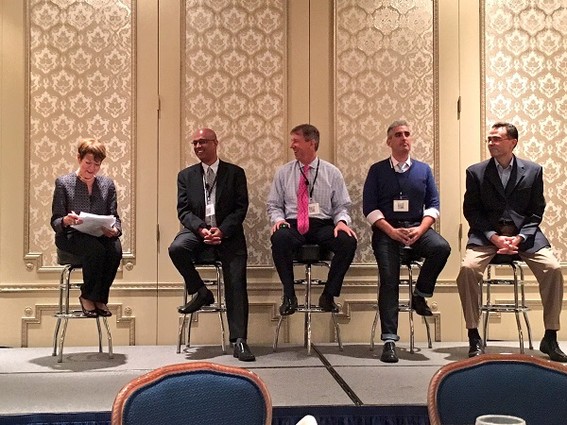 Software is “gobbling up” the world. That was just one of the perspectives on tech and entrepreneurship discussed at the October meeting of the New Jersey Chapter of the Society for Information Management (SIM NJ).

In a panel discussion moderated by Sally L. Glick, principal and chief growth strategist at the accounting firm Sobel & Co. (Livingston), Macwan explained what he meant.

Most of the major innovations of the last ten years have happened because of software, he said. “Who is going to drive the cars of the future?” he asked. “It’s not going to be human beings; it’s going to be software.” Similarly, Airbnb’s business is based on a software-matching platform. Uber is a technology company connecting supply on one side and demand on the other.

Technology is making the world flat, global and local

Technology is also making the world flat, global, and local all at the same time, he added, pointing to how the supply chain now works, pointing to how a supply chain now works. Products are conceived largely in the United States and some other countries, such as Japan, but the products are made somewhere else, and then people are consuming them here.

Macwan was particularly passionate about the way software can be used to get inefficiencies out of production systems so they can scale. He used video as an example. When a string of video content clips are put together for a commercial or a YouTube video — for example, sports or news highlights — it’s people who do that work, he said. Someone looks at a program and figures out the most salient points that were made or the most important video clips to show. “You can’t scale it if you are using human beings. But we as humans are very adept at looking at something and making sense of it. … How can you scale this work?” His answer: to bring innovation to bear on a concept, ask, “Can a machine do it?”

Stephen Socolof, managing partner of New Venture Partners (Murray Hill), has spent his career focusing on corporate innovation and on spinning companies out of larger corporations and helping them scale. In particular, Socolof worked for Lucent Bell Labs which at the time had “hundreds of millions of dollars’ worth of ‘research spend’ each year, hundreds of people in core research and thousands of people in development across the company.”

There were also lots of great technologies that really didn’t fit the traditional commercialization models of Lucent businesses. So Socolof was given the job of finding technologists, researchers and engineers with great ideas that they had been researching and developing for years, but who couldn’t find a market, within the traditional Lucent model.

Along the way, he found that “there was a real difference between people who wanted to take this outside and commit themselves fully to make it a startup career and others who wanted to do this as a project inside the company. So we evolved to a spin out model.”

Lucent spun out about 25 companies, but when Lucent was bought, Socolof formed New Venture Partners, which looked for companies that it could spin out of universities, academic labs and commercial companies. “We became their technology transfer partner,” he said.

A ton of business innovation is going on in NJ

Now Socolof is working with the New Jersey Tech Council on its most recent venture fund. “Venture capital has become democratized,” he said. “It’s no longer all about Silicon Valley or Boston. New York is the second largest venture market and Philadelphia has a nice venture market going.”

New Jersey, he said, is a little bit of a laggard, but there is a “ton of business innovation going on around New Jersey. There are 15 to 20 incubators, accelerators and coworking spaces. All of the universities are transitioning from teaching colleges to research institutions,” and are creating centers of entrepreneurship and incubator spaces.

“I’m really excited to be  more focused on the local community as I help to bring along some of these businesses,” he said.

Next to speak was Aaron Block, cofounder and managing director of MetaProp NYC, a real-estate funder and accelerator that helps fast-growing real estate companies. Block has an interesting background. He served as CEO of BayRu, LLC (Morton Grove, Ill.), the U.S.–Russia e-commerce shopping and shipping specialist, but before that he had been with Cushman & Wakefield (Chicago), the commercial real-estate services firm. He said that he “is a real estate guy, and I found myself in e-commerce and at the intersection of these technologies.”

Block sees the intersection of real estate and technology as an emerging market with a huge potential to scale. He said that MetaProp serves the entire real estate value chain, including commercial, residential, retail, hospitality and more. Some areas the accelerator focuses on are business process optimization, compliance technologies, mortgage technologies and  “basement tech”– hardware and software that impact the operating income of a particular real estate asset.

Block said that he has a passion for building businesses, not creating them. Glick asked Block about some lessons he had learned along his entrepreneurship journey, and he answered that, after his experience in Russia, he had the opportunity to get into a space he didn’t know very much about: accounting. “That’s not an easy thing to learn overnight. It’s a relationship-based professional services business.” He said that he had needed to learn to be humble.

Another lesson he learned was not to be too early for a technology or a market. “This is a common failure. Opportunities can have the greatest technology and the greatest team, and they solve the problem … but sometimes you are too early” in the market. The macroeconomic factors don’t happen at the right time. “In our own business today, when we started it two years ago, it was still a little too early. People in this space weren’t paying enough attention” to how technology could impact the real estate business, he said.

Speaking last was Stephen DelVecchia, founder and CEO of Adaptive Professional Solutions (Short Hills). DelVecchia had been a CFO and EVP for a large staffing firm that he took public in 2008. After that firm went public, he decided to be an entrepreneur himself and opened a staffing business that provided consulting and flexible accounting services.

As he tells it, one day he was travelling to Lake George to try to get his family, in the middle of a heat wave. He got a flat tire. Simultaneously, a client contacted him and demanded a candidate’s references, saying that if he didn’t get them by 5 p.m., the deal would be off. Everyone was getting upset. He thought that an online marketplace would solve the problem. “Let’s put all of this online, let’s cut out part of the fee and connect the client directly to the candidate.” This was in 2011, and marketplaces hadn’t yet come into the forefront, but Elance and a few others were already out there.

Personally, he said, he always had the entrepreneurial drive, but was waiting for the right time and the right project. “At the time when all of this came together, it was a matter of leveraging what I’ve done. It wasn’t like I thought how to get taxis to people faster. ”

DelVecchia said that it took two years to build the backend of the system, and that it was more complicated than his team thought it would be. As the marketplace was not going to be for contract employees, but for temporary full-time employees, it needed to be compliant. “Everything from Obamacare to I-9s [Employment Eligibility Verification forms] had to be taken care of,” he said, adding that if you want to disrupt a $9 billion industry, you can’t be taken to court for payroll violations. Also, it was one of those things that wouldn’t work with the Lean Startup method. “You have to build it right from the beginning and build it compliant,” he said.