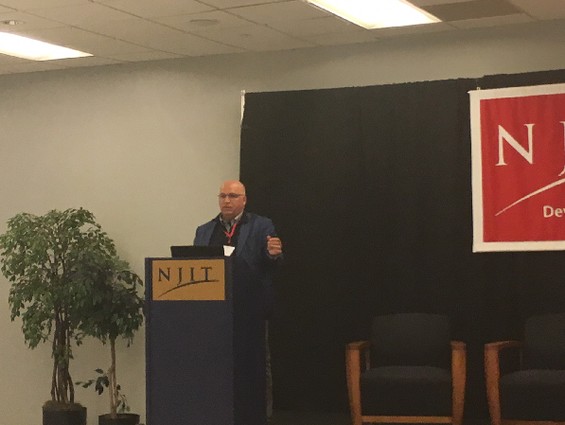 In his keynote at the NJIT EDC Venture Summit last month, David Sorin made a strong case that the world of work is poised for dramatic change.

The current tech tsunami created by artificial intelligence, machine learning, virtual and augmented reality, robotics, the internet of things and advances in blockchain and cryptocurrencies will seriously upend business practices and consumer behaviors, he said.

He also warned of a backlash against technology, as what will be left in the dust will be jobs.

Sorin, who is cochair of the Venture Capital and Emerging Growth Companies practice at the law firm McCarter & English, noted that he had spent his entire career advising innovators and investors and, “I’ve never been witness to a time more right for massive change than today.”

While “technology, tech-enabled and life-science enterprises, as well as the investors who support them, are now, and always have been…a disruptive force,” there is something different about what is happening today.

Now, the convergence of technologies, innovations and applications “are so far-flung and so pervasive that virtually all sectors are ripe for disruption. The impacts from that disruption will be long-term and they will be dramatic. And no industry, no job sector and no profession should consider itself immune.

“We are in the midst of the fourth industrial revolution, and this one is decidedly technology-driven,” he told the group.

These advances will mean that machines will replace human labor in a multitude of job categories. He listed a few examples, including autonomous vehicles replacing 30 million workers; natural language processing displacing people who work in call centers; and AI replacing accountants, teachers, doctors and lawyers.  “Elon Musk predicts 85 percent unemployment in the United States as we move from a working to a leisure economy.”

Of course, some new jobs will be created by these technologies, even as the overall need for human labor will diminish, he said. Those jobs will likely be high-paying, high-quality ones in tech and the life sciences.  However, more jobs will be lost, he predicted.

“So, does technology drag us inexorably into the worst of times?” he asked. “I think not. I think the problem is only if we choose to ignore the implications and we fail to respond to the new paradigm.

“Technological advancements offer the potential for a far greater quality of life, longer, healthier more active lives and the opportunity for people to achieve their greatest ability to do good for self and society. But we must adapt.”

He said that the world needs more educational institutions like NJIT that embrace technology, education and entrepreneurs. “We need massive changes in education — from policies to content to funding.” Education must include coding, statistics and communications components. “We must teach problem solving,” as well as emotional intelligence, so students can learn “the constants of nuance, emotion, gut, drive and ambition, that are still uniquely human,” and so still needed in the workplace.

He said that we have to prepare for a transition from a work-based economy to a leisure-based one.

“With far less labor needed, how do we ensure that people have the means to acquire the products and solutions our economy will be capable of producing?” he asked.

“Do we change the way we think about wage labor? Do we have a transition to a universal income based on new tax policies? Do we tax technology? Do we tax businesses in a way that increases the tax on corporations as corporations become more profitable due to a lower need to allocate dollars to labor? Do we have a reallocation system that takes money from the corporate profits and brings that into people’s hands? I don’t have the answers to those questions, and I’m not suggesting one or the other. But we have to start thinking about these things,” he said.

Judith Sheft, associate vice president of technology and enterprise development at the New Jersey Innovation Institute (NJII), asked about some of the newer business opportunities that will arise from these new disruptive technologies. Sorin responded, “Virtually everyone we talk to in the investor world is asking how companies are planning to integrate artificial intelligence and augmented intelligence into their business processes. You don’t have to be an AI company, but I’m hearing over and over again that investors are expecting that companies” will integrate AI into their processes and technologies.

“In the financial world, we’re seeing a potentially dramatic upheaval,” he said. With “cryptocurrencies, ICO’s, it’s the Wild West right now. But there seems to be no question that, because of blockchain-based technologies that empower movement toward cryptocurrencies, our economy can change dramatically as a result of the increased security associated with transactions done that way, and the ability to avoid intermediaries entirely. The possibility that we could have dramatic change in our banking industry is right on the horizon.”

He added, “Using cryptocurrencies, we have the ability to have far less friction in conducting business transactions, but we also have the possibility of nation states really having a greatly diminished ability to control the size of the money supply.” Then he asked rhetorically, “What happens to monetary policy if cryptocurrencies truly become a major way of conducting business?”

In response to another question, Sorin concluded, “I think this technology has the power to dramatically move our lives and dramatically improve our standard of living, but it requires leadership that we simply lack. We really haven’t seen leadership anywhere within our society to make meaningful change, that’s going to make sure that we don’t have a generation or more that’s lost.”

Previous: Interview with Ethan Chazin, Author of “The Compassionate Organization”
Next: Catching up with NetElixir’s Udayan Bose: Expanding Nationally to Capture Opportunity