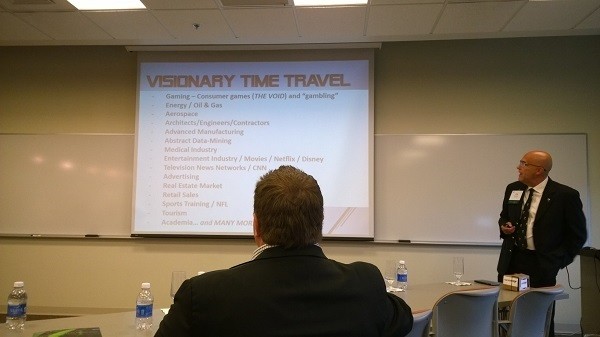 Attendees got a glimpse of military, business and educational applications for virtual reality (VR) at Rowan University (Glassboro) during a New Jersey Tech Council meeting titled “Where is Virtual Reality Headed?” on October 27.

The event featured several expert speakers as well as a tour of Rowan’s Virtual Reality Center.

Speaker Joe Swaty predicted that VR will disrupt many industries, including entertainment, education, architecture and aerospace. He told the crowd that “everything you think of — every field — has an advanced visualization component.”

Swaty said that he is also a consultant to Mechdyne, which produces much of the existing VR software and equipment, including the CAVE (Cave Automatic Virtual Environment) at Rowan University. Many VR simulations take place inside CAVE  units, typically multisided structures in which simulations are projected onto the walls. People inside a CAVE wear 3D glasses to get a fully immersive experience.

Swaty discussed VR’s potential for use in training simulations for combat medics, for example, or for use in immersive applications like the study of art history.

He told the audience about a one-of-a-kind vase found at an architectural ruin site. This vase was scanned and reproduced in a “virtual museum” inside a CAVE. Students can “go in and physically knock that vase off the top of the stand if they want to,” Swaty said. “They get to see relics that are priceless in real time.”

Discussing VR’s use in architecture, Swaty told an anecdote about Terry Pegula, who donated $102 million for the construction of Penn State‘s Pegula Ice Arena. Pegula was shown a VR walkthrough of the arena and asked for some windows to be expanded to provide a better view of the ice rink. This happened before the windows were actually installed, so “it saved $475,000 in change orders overnight,” Swaty said.

After Swaty’s presentation, Elkins told the audience how VR is used at NASA, which he said has been developing the technology “for a long time.”

One area where NASA has been exploring VR is called “low-latency teleoperations.” This term refers to fast, responsive control of robots from a distance. Missions using low-latency teleoperations would allow orbiting astronauts to control robots on the surface of celestial objects like planets and moons. These robots could then be used to explore and collect samples from the object’s surface.

The next speaker was Sassinsky, who explained why his drone company also works with VR. Drones can create 3D models of large areas by taking photos as they fly. Because of this ability, “drones are going to take over data collection,” Sassinsky said. He added that VR can act as a content delivery system for those models.

The final presentation was given by Klassner, who explained how VR is used at Villanova University. In addition to being a professor at Villanova’s Computing Sciences Department, Klassner is the director of the university’s Center of Excellence in Enterprise Technology.

A Catholic university, Villanova has a relationship with the Vatican, and Klassner and others from the school were able to enter the Sistine Chapel and take photos. These photos were then used to create a virtual tour of the chapel.

Klassner is now working with a large CAVE unit at Villanova’s Falvey Memorial Library. So far, five professors have agreed to give at least one lecture in the CAVE this semester, Klassner said. However, he explained that getting people to participate can be challenging.

“Sometimes there’s not enough content available, sometimes people don’t understand what the capabilities of VR are,” and sometimes they see it only as an entertainment tool, Klassner said.

The other speakers also touched on obstacles to the adoption of VR. “For VR to actually make a dent in this world, it can’t be a novelty,” Sassinsky said. He added that it has to have practical uses, like in data analysis, “and then in the entertainment world, it has to be something that provides use and that truly entertains us — that we really find interesting.”

He also said that if VR is going to be adopted by companies, “it has to address the three things that all businesses need to address. Does it improve quality? Does it reduce costs? Does it increase speed? If it doesn’t do one or multiples of those things, they’re just not going to put the money into it.”

Sassinsky added that, for consumer adoption to occur, VR products will need to be relatively cheap and exceptionally easy to use.

Swaty said that, as VR will be used in so many fields, “convergence of software between all these different disciplines” is key. Still, he was optimistic about the adoption of VR.