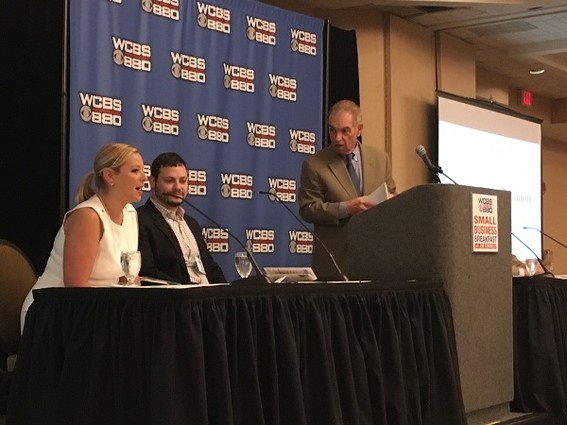 At the CBS Small Business Breakfast on June 10 in Mahwah, Rita Gurevich, founder and president of SPHERE Technology Solutions (Jersey City), gave advice to the attendees on messaging, hiring and the advantages of being nimble.

Figuring all that out is a creative process, she said. “In my world, although data security doesn’t sound like something you can be creative with, you actually have to be incredibly creative.”

Gurevich said that SPHERE innovates in the way it helps companies educate employees and in the way it puts the right tools and processes in place, so as to handle things behind the scenes.

Later, in response to a question about how successful small companies handle messaging, Gurevich noted that she’s in a very competitive market. As a seven-year-old company in competition with giants like Microsoft, she said, “we have to be very creative with our marketing. We do a number of things to stand out. We try to add some character and personality to our marketing.”

A great example of that, she said, is a marketing campaign showing that SPHERE cleans up messes. As part of the campaign, the company called its staff “your data janitors,” and the staff dressed up as janitors and custodians. SPHERE then tracked the campaign’s impact. “It was such a hit; customers loved it,” she said. And it spread awareness about what the company had achieved across the country and to different industries. “We got calls from companies we had never heard of before.”

Gurevich noted that her background is quantitative, not creative, but she got around that hurdle by hiring the right professionals to teach the company about the creative side of marketing, as well as about marketing tools. “They taught us about social media tools that let companies publish to all different social media outlets, and tools like Marketo that allow you to profile your audience and understand what they are looking for,” and how your company is affected.

Connolly quizzed Ramot about how he gets his messaging spot on, as Connolly is himself a Via customer, and feels that messaging has been extremely helpful, rather than annoying.

Ramot responded that his company is looking at early data on customers, trying to figure out what would be helpful to them. Connolly noted that, when he was standing out on a corner, trying to use the app, he got a message from Via giving him helpful links on how he could use the app correctly.

With regard to messaging, Pinsky noted that during his time in government, he ran across many initiatives that were trying to adopt best practices from business. Now that he’s in the private sector, he is applying what he learned in government to business.

He recalled trying to launch programs in government during the height of the great recession, and how the economic development staff in Mayor Bloomberg’s administration realized that, to get the word out, they had to start by articulating at the thematic level what they were trying to achieve.

When they launched a program, they spoke about it as part of a larger architecture, rather than as just another small initiative. “Suddenly people responded. …They recognized the scope of what we were doing, so that it all added up to something bigger. And they were reassured. At a time when it felt like everything was in chaos and nobody had control over anything, at least there was someone out there who had an idea of how we were going to dig our way out of the hole.

“What I’ve learned from that is that the strategic level is just as important as the tactical. If you can articulate to people not just the little thing you are doing, but how that fits into the bigger picture…it will be much more effective” for your company. He added that it’s important to articulate your goals not just to your customers, but to your employees as well. Employees “are much more inspired when they feel as though they are part of something bigger.”

Oates, whose company, Justworks, is a fast and simple platform that automates HR for businesses, described what innovation looks like in his industry. “Where we are really looking at doing something different is around benefits,” he said. Connolly recalled that Oates had told him that a lot of businesses are buying HR services that they hate buying and using, and that they’re really frustrated with the process. In response, Oates said, “Making it less awful is a good place to start.” However, we “actually want to be a service that people love.”

In response to a question about how smaller companies can compete with larger ones, Gurevich said that competition with larger companies can be the best thing to happen to a small business. “You have the big dogs that essentially have unlimited marketing budgets who are essentially telling the community that there is value in what you do.”

Also, if a large company has a great idea and you have the same great idea, you can implement it so much faster, she said. “It will take the mega-companies so much time to implement that,” but a smaller company can be nimble.

The panelists also addressed the issues of hiring and competition for potential employees. Gurevich said that SPHERE hires directly out of school. “We focus very much on Millennials. They are quick and savvy. …We know that they know nothing. We have a clean slate. If you go that way, and are OK with it, it will be a great experience.”

She added that, as a young woman in an industry that didn’t have many young women, the problem she initially had to face was how to sound really smart to people who had been in the industry “longer than I’ve been alive.” How do you do that? “You have to use big words and really long sentences in the beginning.”

“But as you gain a little bit of experience and a name for yourself, it’s OK to keep it simple. …If you are selling something, [customers] need to understand what you do, so keep it simple.”

Previous: Technology Marketing in the Digital Age: Using your Email Digital Signature to Brand Yourself and Your Organization
Next: New N.J. CTO plans to use cyber background to 'embed' security in state's IT