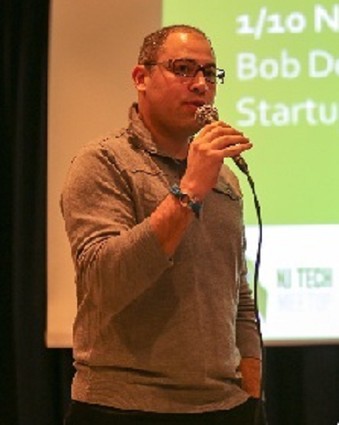 What do you get when you combine the talents of a successful event organizer with the experience of the expert in gamification and you throw in a gifted tech cofounder?

The answer is livecube, a startup with a Web application that integrates event management, gamification mechanics and social networking to engage audiences at events.

The brains behind livecube are Aaron Price, organizer of the very successful NJ Tech Meetup, and Gabe Zichermann, chair of the Gamification Summit and author of many books on the subject. The tech cofounder, Justin Schier, is also a cofounder of New York-based Dopamine, a creative agency with gamification in its DNA.

While livecube’s official address is New York, Price also works on the startup at Mission 50, the Hoboken coworking venue.

In a recent interview with NJTechWeekly.com, Price called livecube a functioning B2B product that is generating revenue. “We have sold it to several Fortune 100 clients, and we are recruiting others,” he noted.

Is livecube looking for funding? “We’re primarily focused on business development and sales,” Price said, “although we’ve been approached by some investors, so we’re exploring the idea.”

The product is well-tailored to corporate events, and livecube is building on those product sets, he added, noting, “We are talking to as many corporate event planners and people in that ecosystem that we can possibly speak to.”

Price said livecube does everything a good event-management application ought to do, such as scheduling speakers, managing logistics and handling networking.

The difference, though, is that livecube starts with the idea that companies and event managers want to not only run great conferences but keep their audience focused on them during sessions — not drifting into, say, playing Candy Crush Saga.

“No matter how great a speaker is, it is challenging to hold people’s attention,” Price said. That means event organizers have to come up with an engaging way to manage audience behavior.

Added Price, “livecube is all about getting people to focus their behavior, so the device in their pocket can complement the event and not be a distraction.”

The reality is, people are on their phones during events anyhow. Tweeting, in fact, has become a faster way for attendees to take notes at events so they’ll be able to remember who said what, Price noted.

However, he said, tweeting is hard. “You may not know the right hashtag. We have people at NJ Tech Meetup, for example, who put ‘#NJ space Tech,’ ‘#NJ Tech Meetup,’ ‘#NJTechme’ and ‘#NJTech’ as hashtags when they tweet about our event,” he noted. The time it takes to discover the right hashtag becomes a distraction.

Finding the correct speaker handles can also distract attendees, Price said. Speakers often flash their handles once or twice on their presentation slides. If the audience doesn’t catch them, it will have trouble sending tweets to the speakers.

Using traditional means of tweeting, there is no feedback loop or incentive for people to add quality content to the stream. However, livecube autopopulates the Twitter conversation with hashtags and speaker handles, which Price said can make working with the social media platform seamless.

The startup also uses game mechanics to reward users for providing quality content, Price said. They can earn points, badges and prizes for being involved in the conversation in a meaningful way.

This is how livecube works: a user contributes content to a session he or she is attending. Other people repost (retweet) that content. In effect, reposting is the crowd’s way of saying, “This is valuable content.” Users who contribute content earn points, and those who repost that content earn additional points.

“At a recent event, one of our clients — a public company — had 183 participants … and every single person used livecube, which was amazing. They had over 6,000 messages and over 13,000 reposted messages,” Price noted.

The publisher Random House used the tool during a wellness-education day, when members of the public were invited to speak to the authors. Price said the livecube team was at the event to observe how it went.

“We had people there who had never been on Twitter … coming up to me and saying, ‘My kids are going to be so impressed. Not only am I on Twitter but I’m on the leaderboard,’ ” Price said.

That event garnered several thousand posts. “It shows that if we give people a tool they can use to be involved in the conversation that’s effective, they’ll embrace it,” he said.

The next version of the product will continue to focus on corporate clientele but will also work well for noncorporate events, such as meetups, Price noted.

The current version is compatible with other messaging applications besides Twitter, he said, and that ability is important to some clients. “We can power it with Salesforce Chatter and Yammer, and we have some banking clientele that want a private experience, so we have a private messaging tool as well,” he noted.

It’s not all about Twitter, said Price, but for clients who want social amplification and reach for a public conference, Twitter is a great tool.

Asked why livecube is presented as a Web application for end users, Price said that approach had been chosen deliberately. “We have found that when you ask participants to download an app, you lose from 30 [percent] to 90 percent of them right at the beginning. There are just people who are unwilling to download an app.”

Discussing the company’s origins, Price noted that he had developed a telephone game that the audience plays at the end of each NJ Tech Meetup. While Price was speaking with some mentors about the commercial opportunity the game presented, Zichermann told him he had developed a product to apply game mechanics to social media. They decided to team up and form a company focused on better audience engagement tools. Price put his startup weCraft.com on hold to develop livecube.

Price says he is gratified to be part of the livecube experience. “For me … it’s the culmination of what participating in organizing a meetup has brought. I now have a great understanding of the events industry, and that has brought an entrepreneurial opportunity that I strongly believe in.”