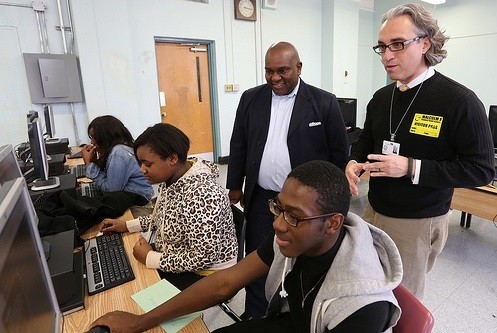 The theme of this year’s Computer Science Education Week, Dec. 9–15, 2013, was “Hour of Code,” designed to introduce students and others to the concept of coding.

Possibly the most intensive effort in New Jersey to fulfill this mission was led by Newark. The city organized some 30 volunteers, who headed out in teams to 15 schools to share the joys of programming with city students.

“As we work to position Newark as a hub in the fast-growing tech sector, it is equally important that Newark residents, particularly students, are preparing for these careers. Brick City Development Corporation plans to continue to support more Newark programming in coding, social media for business, blogging, etc., far beyond Computer Science Education Week,” Richardson was quoted as saying.

Peggy McGlone of the Star-Ledger reported on 13 students at Malcolm X Shabazz High School (Newark) who participated in the national initiative launched by code.org. She also visited with students at the city’s Ivy Hill Elementary School.

Matt Martone, founder and CEO of ClixSocial Media (Newark), led a solar lesson created with a Code Academy business plan at Ivy Hill. You can see the Star-Ledger video here.

All over Newark, volunteer participants were tweeting about their days, which many found inspiring.

Programmer Carl Zulauf said: Just got done helping a great group of 7th graders at Ridge St School in #Newark learn HTML for their #HourOfCode. So glad I volunteered.

Saad Malik tweeted: Contrary to my last tweet, just finished volunteering for #HourOfCode at an elementary school in Newark. Some bright minds.

Grid32InfoSec said: Just taught an #HourOfCode to some amazing 8th graders at Science Park High in Newark. Thanks for having us & keep on coding!

Seth Wainer, senior technology policy adviser for the city, and BCDC had recruited the volunteers.

One of those volunteers was Alex Bryden, a leader at Build in Brick City, an initiative to support and help develop Newark’s tech community.

Bryden told NJTechWeekly.com that Hour of Code was “a huge success in Newark because the kids were not only receptive to learning what is essentially a new language, but they understood instantly why this was important and how it could benefit or even change their lives, no matter what their interest is.”

He added, “I believe technology has the power to positively impact every person’s life, and to have the chance to directly inspire students to imagine the next app or build their own website or create the next video game is immensely rewarding and exciting.”

Bryden encouraged other programmers and designers to get involved the next time volunteers are sought. “I encourage everyone who believes in the possibilities of technology to encourage students to rethink and reimagine their world, and the Hour of Code can be just the beginning.”

Volunteers told students how learning coding affected their own lives, and then they led them through free Code Academy lessons. Afterward they encouraged the students to sign up for free accounts and continue to learn coding on their own.

All over the state, students were participating in similar exercises.

At Kent Place School (Summit), fifth graders worked on Lego robotics designs. An article by the Independent Press stated the students were “programming Lego alligators to open and close their mouths. Gears, motors and distance sensors controlled the mouths.”

The article noted that even some of the youngest Kent Place students had learned the basics of coding. And at the middle school, students learned coding using a program called App Inventor.

In Freehold, schoolchildren watched video clips about computer scientists, then did coding activities from the Hour of Code website, according to an article in Freehold Patch. Older students used a website called Scratch to create games, animated stories and interactive art.

In Washington Township, students dragged and dropped commands for turning left and right to navigate their Angry Bird character through a maze to reach an evil pig, Emily Cummins of the Warren Reporter said in an article.

“With each wrong move they learn the basic concept of computer coding: taking a problem and breaking it down to each small step,” the article said. According to Daryl Detrick, a Warren Hills High School computer science teacher, “The Hour of Code teaches the logical thinking without the syntax.”

In South Orange and Maplewood, all students participated in a computer programming lesson as part of Hour of Code, an article in Maplewood Patch noted.

Patch reported that “after seeing the excitement and engagement of the students, Maplewood Middle School Principal Jeffrey Truppo challenged students to design an app to deliver real-time news and information to the school community.”

According to Star-Ledger reporter Kelly Heyboer, Monmouth University (West Long Branch) held several sessions at which parents and students could complete an Hour of Code activity together. Students and professors from the private university answered questions as participants completed a self-guided coding exercise, the article announcing the initiative said.

Previous: Spotlight on livecube, NJ Serial Entrepreneur Aaron Price’s New Startup
Next: Finding Food (and Gas and Heat) in an Emergency: Currant is Making an App for That