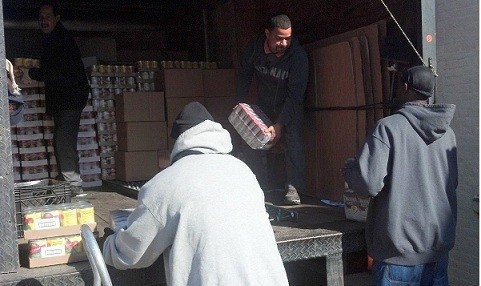 Volunteers unload a truck full of goods delivered to a Meeting Emergency Needs with Dignity (MEND) pantry in N.J.The pantries are low on food after Sandy, and some are still without power, but the demand for their services has increased. | YouGiveGoods

As the tri-state area recovered from Superstorm Sandy and endured another nor’easter roaring up the coast, NJTechWeekly.com interviewed Patrick O’Neill, CEO of Mendham  startup YouGiveGoods, a company perfectly positioned to help out during these trying times.

YouGiveGoods.com — launched in September 2011 — is a novel way of organizing charity food drives. Churches, synagogues, companies, fraternities, Boy Scouts and Girl Scouts — any organization — can go to the website and set up a virtual food drive in minutes. The virtual drive can be run simultaneously with a traditional one.

The site lets people donate food, and in the future other goods, to a cause. Donors choose the food they want to donate among the options given. YouGiveGoods consolidates the orders, puts in a bulk order with its supplier and coordinates the food’s delivery to the food pantry.

Luckily for N.J. residents who need food in the wake of Sandy, O’Neill’s team has designed the site for scalability, operating on Amazon’s cloud Web servers. The startup’s ability to scale was tested during Sandy’s aftermath, when more than 120 organizations decided to run impromptu food drives. YouGiveGoods has shifted from normal operations almost entirely to Sandy relief efforts:
www.YouGiveGoods.com/SANDY.

While the company’s offices in Mendham lost power and Internet during the storm, its servers stayed up and its dedicated employees (there are 10) worked virtually 70 to 80 hours a week to get all the newly initiated food drives up and running.

How did the idea forYouGiveGoods develop?

In the middle of 2010, a group of us were sitting around talking about the state of the economy as the recession took its toll. We knew that the number of hungry people needing help had risen dramatically. At the same time, support for the nonprofit sector had been shrinking because private giving was at a standstill and government support, due to budget cutbacks, was also down. We were thinking about how all this sorts itself out. You have growing demand for human services and fewer resources to help. We thought a technology solution could help, and we looked at a couple of different possibilities. Ultimately we got very focused on food drives and other types of drives where people donate items rather than send money.

We looked at the process of how those drives work and found they are very inefficient. We thought that if we could use technology to make them more efficient, we could make it easier for people to donate larger amounts of goods and more people might participate in a given drive.

Who are the founders?

The people who founded this have a couple of things in common. We all have children and are thinking about the future and the lessons we are teaching them as we raise them. We are all pretty civic-minded and are involved in various volunteer activities. We were motivated by the idea that we could make a real dent in the macro issue of hunger in this country by developing a disruptive way of setting up food drives and other kinds of drives.

The website was really founded by three couples, all of whom lived in N.J. at the time and were involved in the original concept development: my wife, Mary Kay, who handles finance and accounting, and me; Michael and Patty Lynn Connell; and Paul Tomasi and his wife, Lisa, who now focuses on social media and marketing. We have a strong team. Tomasi has a strong technology background, having founded E-Risk Services, one of the first Web-based insurance companies. I am a West Point graduate, have worked in the real estate and energy sectors and done some tech sector work and have been a CEO of several companies. Connell, now chief sales officer for YouGiveGoods, went to Bloomsburg University and worked for a couple of Fortune 500 companies in marketing and sales.

We started off with the broad concept that you could make it as easy for people to donate something — food, clothing, school supplies, blankets — as it is for them to donate money. We wanted to give people a tangible sense of what their money is accomplishing but save them a trip to the store and back to the collection site. We analyzed how traditional drives work from a process standpoint. Early on we decided that we wanted to virtualize the logistical aspects of the drive.

One of our big features is communications. The drive organizer lets people know that the drive is taking place. For a traditional drive, you’d tell people where the donation boxes are set up and ask them to go to the store or their pantry and take the donations to the collection site. After a limited amount of time, the organizer would collect the goods and take them to a food pantry or another charity. For our virtual food drive, organizers tell people the address of the drive’s Web page and give them the alternative to go there to buy the food. When the drive is over, our supplier delivers all the donated food directly to the food pantry.

From a drive organizer’s perspective, the work of the drive — which includes managing the logistics and the promotion and communications piece — is automated. Our site lets the organizer focus on creating awareness. We also provide organizers with information on everyone who donates, so they can thank them personally instead of sending out a blanket email.

When the drive is over, we contact the food pantry, let it know the kind and amount of food that was collected and schedule a delivery, usually two or three weeks in the future. We pull a report from the system that lists all the goods contributed to the drive and ship it to the supplier, who puts together a shipment to the food pantry. We do some coordination work between the supplier and the food pantry, because pantries often have limitations on the hours they can accept delivery. And sometimes the organizer wants to be there when the food is delivered, to help unload.

What technology challenges did you face?

Early on we decided we wanted to build a system that was scalable. We didn’t want to be in a situation in which, if we started to experience rapid growth, we’d have to redo everything. We made a decision in terms of how the coding would be done for the site and how it would be hosted.

To give you an idea of the market size: each year the federal government spends about $100 billion on food stamps, but each recipient gets only about $100 per month to spend. That $100 is certainly not taking someone through a whole month. The food pantries, shelters and soup kitchens out there are probably providing two-thirds of what people need. You are looking at a $240 billion market for food that helps feed people. While you can’t find good statistics on the number of food drives held each year, there are probably around one million We wanted to be able to accommodate pretty fast growth.

The other tech challenge was developing a good user experience. Food drives are a community of people coming together for a common purpose. While we couldn’t replicate that experience online, we didn’t want to be just a supermarket where people go to buy things. We developed a whole communications aspect to the technology. If you are an organizer, you get notification that someone bought a case of soup. It’s as though you were standing next to the collection box watching people put things in it, so you can thank them via text, email and phone call as you would offline. We have gotten really nice feedback from organizers that their members like the acknowledgment and that it helps enrich the experience.

Part 2 of this article will be published next week.