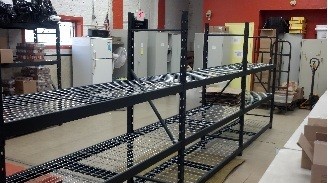 NJTechWeekly.com continues its interview with Patrick O’Neill, CEO of Mendham-based YouGiveGoods, a company perfectly positioned to help out as many try to recover from Superstorm Sandy.

We first met O’Neill at the NJTC IT Telecom and Mobile Innovation Competition held Oct. 4, 2012, at the New York Internet data center (Bridgewater).

YouGiveGoods.com — launched in September 2011 — provides a novel way of organizing food drives. Anyone can go to the website and set up a virtual food drive in minutes. The virtual drive can be run simultaneously with a traditional one.

Luckily for N.J. residents who need food in Sandy’s wake, O’Neill’s team has designed the site for scalability, operating on Amazon’s cloud Web servers. The startup’s ability to scale was tested during Sandy’s aftermath, when more than 120 organizations decided to run impromptu food drives. The website even dedicated a separate page on its website to these effort (www.YouGiveGoods.com/SANDY).

During the storm, the company’s offices in Mendham lost power and Internet, but the servers stayed up and the company’s dedicated employees (there are 10) worked virtually to get all the newly initiated food drives up and running. Part one of the interview can be found here.

Who did the development work?

A company based in Mendham called Nickelfish did the majority of the programming for this. We’ve worked closely with Justin Marcucci, CEO. We selected Justin and his team at Nickelfish to develop our website after meeting with 10 different companies, some located in N.J. and others around the world. It’s been a great match from the start. They are passionate about what they do and have been instrumental in working with us to create a site that functions well and for which we receive a lot of terrific feedback.

How do you generate revenue?

Our model has generated revenue from the start. When people buy things to donate to these drives, we are selling them at a retail price and sourcing them at a wholesale price. Our operation is self-financing until we move off the current growth rate and shoot for a higher one.

Are you looking for funding?

We have been self-funded from the start and plan to self-fund for at least another six months and maybe beyond. We’ll make a decision fairly soon as to whether we want to raise outside capital. Whether we do will depend on how we execute our expansion plans.

Besides the normal issues of how much ownership we want to give up and what expectations someone outside might have for the company, we are looking at our first year of website operations, which ended this past August, very carefully. We hosted about 300 drives the first year. We are scaling very quickly. Between September 1 and mid-October, we had 300 more drives set up. In the first six weeks of our second year we matched what we did in our whole first year. Since mid-October we’ve set up another 150 drives. Our growth rate is accelerating. We’ll have to see how things continue. We expect our growth rate to be high during the holiday giving season and then fall off a bit.

We are still primarily based in the N.Y. metropolitan area and N.J., and the question for us is, Do we want to roll out across the country? If so, we are going to set up a sales force to cover major metropolitan areas. The reason for that is, although we are experiencing viral growth, the services we offer require explanation to many organizations. Many organizations are interested in hearing about it in the first person.

In the context of Hurricane Sandy, we are partnering with the Salvation Army in N.J. and N.Y. and dealing with the state-level people there. There are opportunities for us to partner and work with very large-scale organizations, and those organizations require more information about how we operate. Most other organizations can go to the site and self-manage the whole process, but some people need more than what our website provides.

What is fueling your growth?

Probably more than anything, a contest system we announced before Labor Day. The system allows groups, like fraternities and sororities, to compete for the amount of food raised for a particular cause or during a different period of time. We’ve created a leaderboard so they can track their progress. In a recent food drive, competing fraternities at a South Carolina university raised 24,000 pounds of food. This year, with the online component and the contest aspect, they raised 40,000 pounds. In this case, the students donated both online and traditionally, but it turns out they donated online by a ratio of 2-to-1.

We plan to expand our verticals to blanket drives, clothing drives, school supplies drives. Our technology is built so any of those kinds of drives will work. It’s a question of how quickly we can get them into the mix.

What professionals have helped you out along the way?

Differing from some technology startup companies, the group of us that started this has bought and sold a number of companies, and we have a trusted network of professional contacts we rely on for bouncing ideas off and gaining perspective. Unlike young startups, we have the know-how to go forward. We are pretty experienced hands. That said, I’d like to mention Richard Crooker of the Windels Marx Madison office.

What do you think of N.J. as a place for startup businesses to emerge?

We have been surprised by and pleased with the robustness of the technology community oriented around startups, social good social media, and mobile in N.J. There is just so much more going on here than we would have expected. There is a lot of great talent, and my sense is that it has reached some kind of critical mass, because there is so much going on. Some of that is connected to the growth of all these things in the New York area, but within N.J. itself there is a lot of healthy activity.

That said, we recognize that there is a high cost of living in the N.J. area, and since we can operate virtually, there is the opportunity for people in other places to do the same work someone here does.