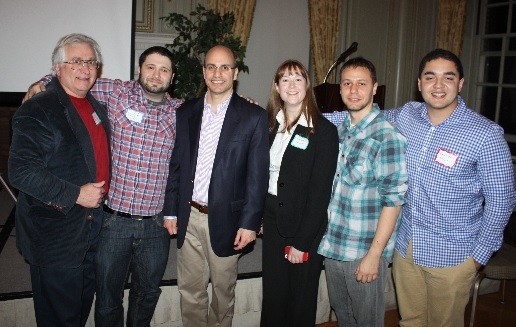 The Sunday evening culmination of Startup Weekend Madison on March 17, 2013, began with all the teams pitching their somewhat altered products and ended with the selection of three winners. The teams had been working on their ideas for 54 hours, revising them as needed while being supported by excellent mentors and coaches.

The event took place at Fairleigh Dickinson University and involved some 75 mostly tech entrepreneurs. Startups were competing for some substantial prizes, but mostly came to the weekend to incubate their ideas quickly and efficiently.

Coaches proved to be very important to this group of winners: all of the three top choices told NJTechWeekly.com that their mentors had helped them in their quest to refine their businesses. The participants also liked the overall culture of the event, whose activities ranged from meeting other developers and founders to learning how to turn an idea into a business.

First-place winner Hani Shabsigh had an idea about building a platform to help mobile teams collaborate easily, but over the weekend that idea morphed into a holistic approach to privacy.

“We [the team] pivoted three or four times over the weekend,” Shabsigh noted in an email, adding that they finally achieved focus after speaking to mentors Diana Keyser McNeff, Herbert Moore and Tim O’Krongly in sessions on Saturday afternoon.

Said Shabsigh, “We developed PrivateChat to focus on making users feel as if they were having a conversation with someone behind closed doors while collecting absolutely no data. We were confident on our approach, as it stood in contrast to most solutions in the market today that emphasized encryption as a form of data privacy.

“Overall, Startup Weekend was a great experience. The mentors were awesome, but the best part was the culture of the event. It’s great to be at an event where I can feel at home (go, N.J.!) and flex my startup muscles,” concluded Shabsigh.

The winners were eligible to pitch to be in the upcoming class of the TechLaunch accelerator.  Shabsigh said he had done that, but he was unable to provide more details because of confidentiality agreements.

Second-place winner Karen Van Blarcum, who worked with Arunesh Mishra on her startup HotSpots, said her product never changed during the weekend: “What was pitched was what was built.”

Hotspots is a browser-based, simple web-editing solution that will allow small businesses to change or edit a portion of their websites on an ongoing basis easily, without the need to go back to their web developer to make the changes.

Echoing Shabsigh’s opinion,Van Blarcum said the best thing about the startup weekend was the culture of the event, which she called an “intense, rewarding” learning experience. “Having an idea, talking about it to a room of strangers, meeting a young man who liked my idea, building it and turning it into a working prototype” was very satisfying, she said in an email.

“So many people say, ‘What if … ,’ but going to Startup Weekend allowed me to take my ‘What if … ’ and turn it into a ‘This is it!’ Weekends like this one are so fulfilling — they keep me feeling inspired to take risks and do more,” she stated.

Van Blarcum added that the coaches, mentors and other participants were all “wonderful and supportive,” and that Mishra is still working with her on the project.

Since the startup weekend, said Van Barclum, “I have been building presentations and live product demos. I am working each and every day, refining my presentation and getting this idea in front of potential users and monitoring their feedback. I am looking to define our customer base so that we can turn this into a consumer-ready product and go to market.”

She added that she is “looking for early adopters now, putting them on our live platform, and getting them to use our solution. We have had numerous small-business owners sign up and use our product.”

Third-place winner Krishna Malyala, who pitched TripTLC, was able to put together a large team that includedKunal Malhotra, Danielle Newman, Don Nelson, Eric Mabo and Chalmers Brown. The product is a way to calculate the “true lifestyle cost” of doing almost anything, from attending an event to buying a house, using a patent-pending algorithm. For example, the application determines the true cost of buying a home, including commuting costs and the cost of heating and other utilities for that home along with other miscellaneous costs .

Advisers at Startup Weekend Madison helped the team change its monetization strategy over the two days, said Malyala, from a business-to-consumer play to a business-to-business play.

Originally, he explained, his group was thinking about selling ads on a consumer-facing website. The coaches, however, felt that though the product would be useful to consumers, going directly to them would be difficult to monetize. Their advice — to sell to customers such as realtors via a subscription model — helped the team come in third, “because we were really able to provide the business case for monetization,” said Malyala.

Malyala noted that since the competition, TripTLC has become part of a larger company, TLCengine, and he is about to launch the product to realtors. TripTLC will be the first to launch, followed by HomeTLC, then AgentTLC. The service will allow users to search for homes based on affordability, through a real estate agent. Malyala said that he is close to signing his first real estate customer and has presented at several tech meetups since Startup Weekend Madison.

A podcast interview with him can be found here.

Previous: Building The Future: N.J. Colleges Get $1.3B for Construction Projects
Next: Myspace Representative Testifies in Trial of Trenton Man Accused of Using the Site to Plot a Murder