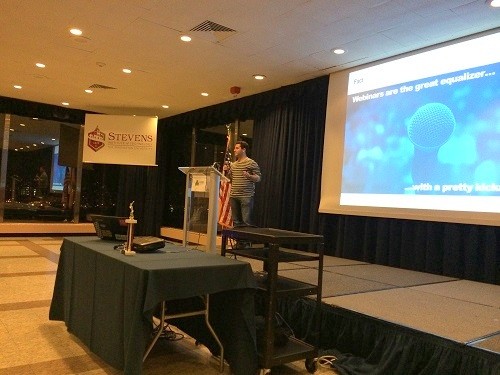 Hublished, which began at NYU and Rutgers, presented at the NJ Tech Meetup. | Esther Surden

NJ Tech Meetup is the largest tech meetup in New Jersey. The group gathers monthly on the campus of Stevens Institute of Technology (Hoboken) and features presentations from three startups plus a speaker who sparks ideas. Networking is a big part of the evening.

Main speaker Rob Grossberg, CEO of New York-based TreSensa, made the case that the mobile web, not apps will be where the mobile gaming industry will see growth in the coming years.

He told developers not to waste years of their lives creating casual gaming apps, but to develop using HTML5 and JavaScript for the mobile web, iterate, and then if there is traction, make an app. The mobile web will help them get discovered, he asserted.

The three startups presenting in October were CardFlight, Hublished and Arden Reed. CardFlight was clearly the furthest along. It had already received $1.6 million in a seed round from ff Venture Capital (New York and N.J.). John Frankel, the N.J.-based VC, sits on its board. The company has other N.J. roots: two of its seven employees live in the Garden State.

Derek Webster presented for CardFlight. The platform is a B2B play. Companies that sell systems aimed at doctors, plumbers, event planners and almost any other vertical can incorporate the mobile platform into their products so those individuals don’t have to leave the application they are using to take payments.

“The guy building electronic health record software can expand his solution to include payments. The person building ticketing software can let their clients sell tickets at the door in the same application,” Webster said.

Currently it’s not easy for software developers to integrate payments into their solutions, Webster said. If they were to do it themselves they’d have to source and integrate the hardware; build secure ways for credit card information to go through their system; deal with Payment Card Industry (PCI) requirements; and integrate with bank APIs, which are not easy or elegant, he noted.

CardFlight provides hardware — a card reader that is encrypted so users don’t have credit card data flowing through their application system — and native iOS and Android development kits so developers can integrate the CardFlight system into their application.

Presenting next was CEO Ben Borodach of Hublished, which had just been through the New York accelerator NYC SeedStart. NJTechWeekly.com had seen the company pitch in New Jersey very early on in its evolution and learned that it had later raised some $160,000 in funding.

Hublished was founded by a team from NYU and Rutgers. The company has pivoted from its early iteration — as a repository for webinars — and says it is now “changing the way businesses generate demand from webinar marketing campaigns.”

Webinars are part of a growing trend in content marketing, Borodach said, but the process of setting them up is painful. While webinar software is good, marketers have to use many different platforms to make the webinars useful in their pre- and post- event stages, he said. They have to create landing pages, perform calendar integration, encode video, do analytics, capture leads and so on.

Hublished has designed a platform to deal with all the pre- and post-event pain. It works with all the popular webinar software, Borodach said. He provided the example of the user who loses the ticket and doesn’t attend the seminar and that of the person who signs up and doesn’t remember to attend, and he discussed the need to prevent this.

“We put the marketers back in the driver’s seat and give them the tools they need to run these campaigns without IT and in much less time,” said Borodach.

“We’ve seen impressive results from our A/B testing, 30 percent in conversion and 40 percent in click-through rates just from letting you register with one click instead of filling out those really big forms,” he noted. The company said it had seen the drop-off rate reduced from 60 percent to as low as 25 percent, he added.

The final startup to speak put a different spin on tech. Carlos Solorio presented for Arden Reed, which calls itself “the discerning man’s tailor.” The company worked with programmers in Argentina and South Carolina to design a 3-D measuring system that helps it automate the creation of custom men’s suits. Arden Reed takes the device to clients’ offices throughout New York City in a truck. Tailors then scan the men to custom-measure them for the suits, which are delivered in four to six weeks.

Solorio, who once worked in Hoboken, told the group the startup had tried a Kickstarter campaign for a business that takes measurements submitted online by clients. But both the campaign and the idea failed. “Men just don’t know how to measure themselves,” he said, and they need help with styling. Now each Arden Reed truck contains a stylist along with the measuring system. For those who worry about the accuracy of the measurements, Solorio said they constantly recalibrate the machine.

Arden Reed seems to be flourishing; the company has added another truck to its fleet and expects to have four more next year. The service is only available in New York, but Solorio told NJTechWeekly.com he plans to expand to other markets soon.