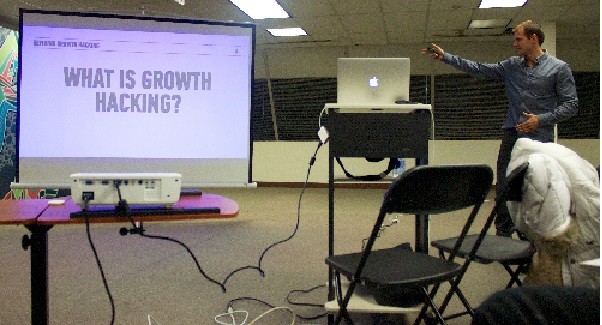 Members of the combined New Jersey Entrepreneurs and Technology Startups (NJETS) meetup and All Things Marketing meetup convened at the JuiceTank coworking space (Somerset) on Oct. 24, 2013, for a primer on strategies for acquiring users.

The keynote speaker was Conrad Wadowski, consultant and cofounder of the website GrowHack.com, which offers technology entrepreneurs tips and classes on design and marketing strategies for gaining exposure.

Growth hacking is described as tactics and best practices for dealing with the problem of user growth. Wadowski gave a presentation highlighting key growth-hacking concepts that startups could consider to avoid the common traps most experience when trying to build their user base.

A common issue tech startups face after launch is slow growth. Lucky startups may get a write-up on a site like TechCrunch or Mashable and see tremendous growth soon after, but that growth eventually tapers off as the product’s novelty wanes. Wadowski termed this “the trough of sorrow.”

Startups often fall into the vicious cycle of adding features to their product to increase its usefulness. The problem is, that often adds complexity to the product, making it harder to identify its strengths and weaknesses.

Growth hacking identifies methods of enhancing a new product through creative methods, including increasing exposure and growth despite constrained resources.

Wadowski used a famous case study — that of Hotmail’s beginnings — to provide an example of a company that successfully leveraged growth hacking. Its astronomical growth was fueled in part by simply adding a signature to each message sent that said, “P.S.: I love you” and included a link inviting recipients to sign up for the service. Within two years, Hotmail had amassed 12 million accounts; it was later bought by Microsoft for $400 million.

Wadowski then shifted his presentation to describe how companies have used growth hacking techniques at each step of the process.

Using the example of Twitter, he explained that the company’s approach to acquisition has been to simplify the interface and educate users during sign-up. Twitter later realized that those who follow 30 people are likely to become full-time users. Noted Wadowski, “It became useful to users, so Twitter tried pushing people to follow 30 accounts quickly.”

“These large companies are testing and retesting so many times that their competitive advantage is their process,” Wadowski added.

NJETS founder Zion Kim had organized the meetup, at which entrepreneurs were able to meet with and hear advice from those with applied experience in growing companies. “Usually entrepreneurs are not comfortable sharing their ideas with just anyone,” he said. Kim announced that group membership had reached 1,200 after the meetup’s being in existence for only a year. “So it means we’re doing something right,” he said.

The event also marked Wadowski’s first time presenting to entrepreneurs in central New Jersey rather than in New York or San Francisco, where he normally gives talks. “It’s cool to speak to some people out here … it’s good to be somewhere else to see what other people are working on,” he said.

The presentation was an adaptation of a broader workshop Wadowski runs in New York as well as online. Details about the full-length class are available at GrowHack.com.

Previous: Panasonic To Lay Off 30 Employees as it Moves Away From Consumer Products
Next: NJ-Connect Headlines For October, 2013 Featuring Infragistics, CommVault, Clear Analytics, Commence and More