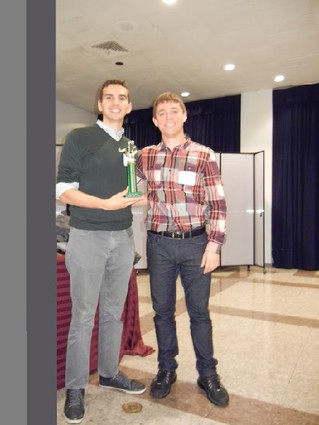 From grocery store aisles to college campuses to PTA meetings, the startups that pitched at the October NJ Tech Meetup have products they hope will improve significant aspects of everyday life. All of the participating startups came out of the past class of the TechLaunch accelerator based in Clifton.

The first pitch was from startup SHIELDtech, created by several recent Stevens Institute of Technology grads who found their idea on campus. They devised a portable panic button that enables students to better communicate with the campus police during safety emergencies.

As presenter Christopher Coppola noted from Department of Justice statistics, there were over 1,800 robberies, 3,000 assaults, 4,400 sexual assaults and 13 murders on college campuses in 2012 alone. He added that an estimated 95% of rapes go unreported, and that one in five women will be raped on or near campus during their college career. “These are all way too familiar headlines in our daily lives,” Coppola said.

So, SHIELDtech (Clifton) offers a button that students can carry on their keychains and press if they find themselves in trouble. When pressed, the button sends a signal alerting the campus police to the student’s location and personal profile. “Within seconds they have all the information to respond to your individual situation,” Coppola said.

The button’s technology includes GPS tracking, a phone app for uploading information, and a dashboard for the campus police. The company just finished its first phase and is negotiating with Stevens and other schools to begin testing.

Coppola said that SHIELDtech plans to sell directly to colleges and universities, which would then give the buttons to their students, a market that includes 7,000 schools and 15 million students nationwide.

She went onstage holding a tattered school directory. “For a parent like me, this is an invaluable tool to get in touch with the rest of the school community,” she said. “However, short of tying this around my neck, I would never find this book when I needed it the most.”

To make things worse, school organizations such as PTOs and PTAs have to spend a lot of time, money and labor compiling and organizing data and printing directories. “The directory chair who is in charge of this process is clearly overwhelmed,” Mallavarupu said.

MobileArq takes all the relevant information, such as school calendars and parent and teacher contact details, and puts it into an app that parents can access on their mobile devices. The idea is to help parents better coordinate conferences with teachers, extracurricular activities and other functions.

Launched in the fall of 2013, MobileArq currently has 37,000 users in 45 schools in 11 states, out of a market that includes 250,000 schools across the country. Mallavarupu said that the company gets its primary revenue from the school organizations, but is looking to build a secondary revenue stream through advertising.

The product is a video screen that plays ads, and it is affixed to the shopping cart in such a way as to face the customer. The company is currently testing the screens, which cost $400 to build and install, in five stores.  Berde said that the company hopes to eventually let customers create their own user profiles and upload shopping lists, among other features.

The company gets its revenue from brands and doesn’t charge the stores anything. According to Berde, brands are interested in getting a better return from a $20 billion ad market. “The problem is that brands and manufacturers lose billions on inefficient advertising that doesn’t drive consumers,” he said. The company currently estimates that it could generate $160,000 in annual revenue per store for an average initial investment of $70,000 per store.

Berde said that grocery stores are looking to improve on their own inefficient forms of advertising, such as the ubiquitous newspaper flyer. “What’s in the flyer already is so deep discount that they don’t make money on it, but they need it to bring someone in the store,” he said. “What they’re lacking is a way to communicate with their customer and press products that are not deep discount.” Berde added that, as the screens get more personalized, stores will be able to market specific products to individual customers as they’re walking down particular aisles.

The audience at the Meetup later voted on the presentations, and awarded SHIELDtech the coveted NJ Tech Meetup trophy.

Previous: Today is Veterans Day – Thank You for Your Service
Next: Jersey City, Newark Neck and Neck in Developing Open Data Portals