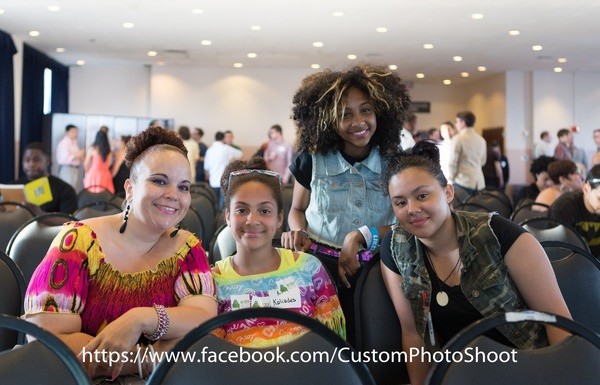 A group of students from an entrepreneurship program run by HOPES CAP,Inc. (HOPES) took the stage at the June 20, 2013 NJ Tech Meetup (Hoboken) and wowed the audience of experienced startup entrepreneurs and developers who had come to network and hear Peter Bell talk about how a non-technical founder can hire the right developer.

The students from Like a Boss, a teen entrepreneur and digital media program, were all 15 years old and freshmen at The Hoboken Charter School. The program was incorporated as an elective during the school day. This was the first time HOPES had run this particular program. “We were very impressed with the results and hope to continue on at the charter school,” HOPES community education director Dominique Tornabe said. [Update: in an email Tornabe said HOPES is definitely continuing the program this fall and she is looking for volunteers.]

According to Tornabe the program was designed to teach an “Entrepreneurship Mentality:” what it means, what it takes and why it is important to think critically and work hard towards one’s life goals. It incorporated modules on creative thinking, problem solving, confidence building, how to find resources and partners in the community, self-sufficiency and “hustle.”

NJ Tech Meetup, among others, supported the program. NJ Tech Meetup community members Jack Zerby (who has relocated), Matt Wade and Don Ryan were among the more than 21 community volunteers that helped out during the program, Tornabe said. Zerby spent time teaching the teens what an entrepreneur is.

Ryan talked about figuring out what problem the product would solve, while Wade discussed networking and presentation skills.  Mary Caldwell, a HOPES certified Microsoft Trainer, taught the teens computer skills, and Corinne Vizzacchero talked about branding, marketing and created mood boards with the group. The mood boards went to professional artists who designed logos for the young entrepreneurs.

Mira Septimus, Art & In-Service Coordinator at the Hoboken Charter School, attended the presentations to cheer her students on. Tornabe particularly thanked NJ Tech Meetup organizer Aaron Price for providing the opportunity for the students present at the meetup, which gave them valuable experience.

Danilee Gonzales discussed her pet sitting project– Pet Sitter — that had an online component and featured prescreening and training for the teens. The site would connect teens under 16 to adult pet owners, and was designed to help the teens have a summer job, learn responsibility and have fun with animals.

Andre Le Bron captured audience interest with his creative presentation of Time Line 9, an online web comic that would let readers have options to change the outcome of the story. “Sometimes when I read a comic, I don’t like the choices the characters make,” he said, so “I started thinking about what would happen if they made other choices….Of course, this would be difficult to implement on paper, but online, your imagination is unlimited,” he pointed out.

Azariah McMillian discussed his program HERO, which stands for Help Earth-Respect Others, an online and offline system for team building that is aimed to help stop bullying and encourage teens to respect the earth. “If people respect each other, they get along better,” he said. “Maybe if everyone worked together to respect the environment, they won’t notice each other’s flaws.”

Kristina Valez was passionate about her idea for a mobile app called Diabetics Eat Too, whose mission is to help diabetics make better decisions when eating out at restaurants, and many in the audience thought it was a great idea. Diabetics could enter the restaurant name and the meal they  planned to have and receive nutrition facts including calories and sugar intake. Then it will provide substitutions, for example an 8 ounce steak instead of a 16 ounce steak. The app will learn what you like. “It knows you like steak, so it will give you a smaller meal, but you’ll still get your steak. It’s still better for you, but you don’t have to eat something gross,” she said. Valez was inspired by her father’s struggles to come up with the app idea.

Ian Aranibar developed an idea for a unique product that will help people cut out perfect shapes like circles and squares without the trouble of doing it with conventional scissors. “This product will be used by people who love arts and crafts or even architects,” he said. Audience members were intrigued by the idea.

Adele Cruz’s product Undercover Candy was focused letting students eat candy wherever they are, without others knowing. The candy would be in the shape of objects kids can use in school like bubblegum erasers and chocolate necklaces. Since kids are often not allowed to eat candy, “my product will give them the sweetness they deserve,” she said.