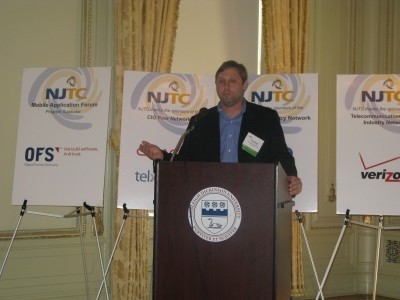 NJTechWeekly.com attended the New Jersey Technology Council (NJTC) Mobile Apps Forum and Competition at FDU in Madison June 20, 2013, where we heard presentations by the winners of the Mobile Apps competition. We’d met some of the winners before, but others were new to us.

As predicted, many of the apps presented were more complex and robust than those we had seen recently, and all revealed the creativity of their creators. The apps were judged by a panel of volunteers who had read through the submissions, though they hadn’t tested the apps themselves.

The winner of the Enterprise Mobile Category was Artisan Mobile (Philadelphia), an app that lets you make changes to already developed apps without having to go in to rewrite the code. Bob Moul, CEO, said user experience is key to obtaining the results brands want, so the ability to make simple changes, experiment and determine what is working for their users is crucial. “We are envisioning an entire platform. … later this year we will have analytics,” Moul said. “We just went general availability at the end of March” after several levels of beta testing, he explained.

The Health Category winner was TIPPS for Better Choices. Mark Annett, CEO of Annett Enterprises (Livingston), whom we’ve covered before, presented his app, which allows for timely interventions before individuals make poor choices that may affect their health negatively. While the app will be aimed at addicted individuals and those with diseases like diabetes who should make healthy choices, others can benefit. Annett expects to charge support providers $1 a month to obtain the analytics the app provides about the patients those caregivers assist.

In the Mobile Commerce Category, Maulik Shah, CTO and cofounder of Mantra Information Services (Bridgewater), discussed his winning product, a mobile banking application for iOS and Android platforms. The app gives small and midsize banks, which don’t have the resources to develop their own apps, the ability to create a custom-designed app that conforms to a financial institution’s branding. “The mobile banking industry will grow by 300 percent each year,” Shah said. “The small banks that don’t have IT resources can’t compete with the large banks, so we built this application,” he said, which is full-featured. The app costs banks very little compared with what it would cost them to develop an app themselves, he said.

Speaking on behalf of Mobile Media Category winner ATC Labs (Newark), Mike Lyons described the company’s new product. It lets radio stations stream music to members of their target audience who are listening on the Web, so they can listen on their iPhones and Android devices. Though not an app, it lets users bypass downloading one. The streaming is accomplished through a hardware solution that lets the Web page stream to an HTML5 Java player.

In the Personalized Services Category, Health Recovery Solutions (HRS) (Ho-Ho-Kus and New York) CEO Jarrett Bauer discussed his company’s platform. The product engages and tracks congestive heart failure patients and provides clinicians data on patient status outside the hospital. According to Bauer, the app prevents hospital readmission. Each patient readmission costs a hospital $30,000, he said. HRS provides a care management service that scores patients on their readmission risk daily and intervenes when necessary. Patients take home a tablet from the hospital with the software installed. Trained health coaches and nurses intervene when patients need them to. The app links all the information with family members, who can help monitor the patient, and will link to the hospital if necessary.

NJTechWeekly.com has covered the Smart City Applications Category winner, Echolocation (Brooklyn), several times as it was a member of the TechLaunch (Clifton) first class. President and CEO Brian Donohue said the app, Echo, is about improving cities by making it easy to discover content and converse with people in the same location as users. The app automatically detects where you are and can provide important information about your area. Donohue showed a demo of Fort Lee after Superstorm Sandy. The app—had it been active—would have been able to inform Echo subscribers of what was going on there. “It’s also a great way to see what is happening all over the world through the eyes of other Echo users,” Donohue said. The company expects to capitalize on the local mobile ad space.

In the Social Media Category, AirCast Mobile (Atlantic Highlands) offers a set of applications that allows users to share video and photos from their phones with big-screen TVs. Tucker Snedeker, cofounder, said he knows this is “a problem a lot of other companies have tried to solve,” but the industry hasn’t made it easy enough to do. He said his firm wants to make it easy for users to take photos and videos from their phones and share them with TVs through an optimized smart TV application. The company has a mobile app, a PC Web application and a cloud service on the back end. The TV app supports messaging among users using pop-up notifications that fade away after a few seconds.

Another TechLaunch company, Pervasive Group (Clifton), presented its MMGuardian parental control app, the winner in the Wellness Category. The product, which NJTechWeekly.com has covered on numerous occasions, addresses texting while driving, cyberbullying, texting in the classroom and locating kids. Parents install the app on their child’s phone and manage it from a comprehensive dashboard on their own phone. It’s easy to use and parent-friendly, Paul Grossinger, VP of strategy, said. Pervasive is now going after the wireless carrier customer, having created a cloud-based solution that carriers can easily implement. The company is already working with a carrier in the Middle East, Grossinger said.

The winner for the Best of the World Category was the Data Inc. (Montvale) client Digital Footsteps (Orange Park, Fla.). The app was presented by Ashis Bishey, VP of technology delivery at Data Inc. The company helped Digital Footsteps develop a platform that lets hotels and tour operators create walking tours of their area. The app allows very targeted mobile advertising, so the hotel or tour operator can advertise a spa, for example, or another nearby business. A unique product capability is that once the app is downloaded, the user doesn’t need a persistent connection to a wireless network. “This is particularly great when you are on vacation in a foreign country, because it costs so much to use mobile data,” Bishey said.

In the Best Educational Category, Rowan University (Glassboro) professor of mechanical engineering Smitesh Bakrania discussed three products. The first, the app Pikme, helps instructors randomly select students to call on in class and allows them to record responses for evaluation directly on their phones. The professor shakes the phone to select the student in this way. The second app, evaluA+, helps instructors grade directly online, automating the grading rubric for improved feedback to students. Bakrania said this is the only grading app that uses a rubric. It was approved in June for inclusion in the iTunes Store. The final app, aCRS, is a mobile platform Bakrania has been working on this summer. It substitutes for a classroom clicker, is available to students using both iPads and iPhones and supports a wider range of questions than traditional clickers.