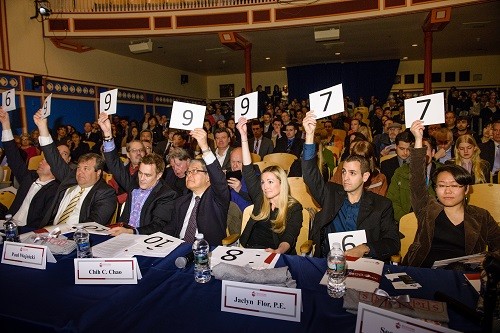 Judges rate the pitches at the competition. | Courtesy Stevens Institute of Technology

More than a dozen teams of graduating seniors practiced pitching ideas to expert judges during two competitions held at the annual Stevens Innovation Expo April 30, 2014. The first-place teams won $3,000 from Stevens plus a one-year membership to the Mission 50 (Hoboken) coworking space.

Aaron Price of New Jersey Tech Meetup moderated both the project plan and elevator pitch competitions. Price, who most recently codeveloped a live event app called livecube, opened the competitions by praising the growing focus on entrepreneurship at Stevens Institute of Technology (Hoboken).

“I appreciate that Stevens has become such a friend of the entrepreneurial community,” Price said. “I want to thank the Stevens community and [Stevens president] Dr. [Nariman] Farvardin. He’s told me many times, when I talked to him about the opportunities for entrepreneurship around New Jersey, that Stevens is just getting started, and I believe him.”

The students of team Power, which stands for “processing organic waste for energy recovery,” won the project competition for their plan to convert food waste on campus to useful compost. According to Salvatore Spinella — whose colleagues included Ann Aquilina, Christopher Ariante, David D’Agostino, Sean Devlin, Clara Luneke, Sarah McDonald and Grace Ridge — Americans waste more than 35 million tons of food, which occupies landfills and can harm the environment, annually. “Our system will be able to recycle 3.5 million pounds of food waste right here on campus while taking up an area no larger than three parking spaces,” Spinella said.

Later, the students of team Vehshi won first place in the elevator pitch competition for their automated bridge-monitoring system. According to presenter Mark Conticchio, engineers are unable to closely, continually inspect the 149,000 bridges in the United States, a failure that has led to more than 600 bridge collapses in the last 20 years. “Data sent directly to the desk of the bridge owner can help engineers capture defects in real time, before collapse happens, saving the lives of the public,” Conticchio said.

Previous: Bell Labs’ Weldon to Gov. Christie: Use Us as an Example of the Best of NJ
Next: Coming Soon: Sayreville's Mall for Millennials