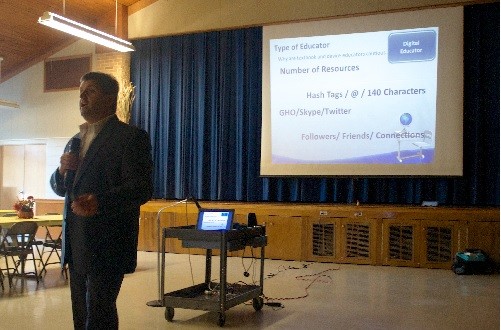 Twitter, iPad, Wi-Fi — this may look like a list of modern teenagers’ necessities for staying connected to their friends, but it could also describe how they communicate with their teachers.

That’s what organizers of the 26th annual New Jersey Association for Educational Technology (NJAET) conference explored with educators from around the state at St. Dominic School (Brick) on Oct. 26, 2013.

At the conference, teachers played the role of students to explore digital-education topics such as integrating iPads into the classroom, creating smart notebook lessons and other aspects of how technology can enhance education.

This year’s theme was “digital momentum” — how the classroom is moving from a paper-based education model to a digital-based one.

Delivering the keynote address was Spotswood Superintendent Scott Rocco, a proponent of the digital momentum philosophy. Rocco discussed the inevitability of a digital-based educational system and told the audience to prepare itself and its students for the transition.

Rocco asked his listeners whether they think the role of the teacher is going to be disrupted by digital momentum. His opinion: the teacher’s role will be even more important in digital-focused education. “[Teachers] are the ones creating these asynchronous learning environments,” he said.

Rocco’s keynote sought to prepare those who have yet to make the transition to digital-focused education and to affirm for those who have that what they are doing is real, important and laying the groundwork for the future of education.

His extensive education background and forward-looking perspective on educational technology made Rocco a prime candidate for this year’s keynote. Using the hashtag #satchat, he hosts a weekly Twitter chat with educators from around the world to discuss education and technology in the classroom.

Rocco noted that his district has 40 laptops on hand for staff and will soon be installing wireless Internet to broaden its digital-learning strategy. The laptop and wireless Internet infrastructure will bring the district up to speed on soon-to-be-implemented Partnership for Assessment of Readiness for College and Careers (PARCC) testing for students, which will be conducted online.

Rocco is aware of the potential risks children may be exposed to by being on social media websites. Given that digital tools will become a large part of education in the near future, he is looking to enhance “digital citizenship” education to teach children how to use those tools responsibly. “If we teach people how to use these tools appropriately — how to use them for what they are intended to be used for — then you’ll have a less likely chance things are going to go wrong, and … they’ll be used for the right purposes.”

NJAET was started in 1987 as a joint venture between New Jersey and various state educational bodies to create a means by which educators could learn about technology in the classroom.

NJAET President Joseph Potaski saw a need to bring educators together to learn how these technologies would become integral to the future of education. Many teachers had no idea what a computer does or how it can be useful in the classroom. Computers at the time were relegated to universities and forward-thinking schools. They were kept in libraries for word processing and research.

“Educators were still looking to understand what this technology did. In the beginning we were teaching things like ‘here’s the monitor; here’s the keyboard,’ ” he said. But Potaski, who has been organizing this conference for 26 years, said teachers now have a basic understanding of computers, allowing them to teach more advanced concepts. “Now we can really explore how digital technologies can be used in class,” he noted.