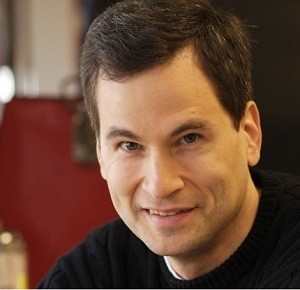 David Pogue of the New York Times was one of the keynote speakers at the NJASA TECHSPO at the end of January. | annon.

Members of the Trenton-based NJASA, formed in 1940 to promote education statewide, include school administrators, school board members, education experts, teachers and others who want to share best practices for improving schools.

This year’s TECHSPO focused on the transition schools are making from traditional print-based instruction to classrooms stocked with Smart Boards, computers, tablets, software and, most notably, a generation of students who have integrated technology into every aspect of their lives.

“Schools are at a pivotal turning point with technology,” said NJASA executive director Richard Bozza. “We are moving beyond ‘classrooms with computers’ to environments where technology is an integral part of creative thinking and problem solving.”

Bozza said educational technology gives students more options. “With technology, students can learn at their own pace, guided by teachers who no longer become the sole content providers,” he noted. “In this way, students become much more engaged in the learning process.”

The conference featured two keynote addresses, one by Matthew Peterson, cofounder of the Irvine, California-based MIND Research Institute, who spoke about a visual method of learning math, and the other by New York Times technology columnist David Pogue, who discussed the first “digital generation” coming of age.

Peterson, a nationally known expert and frequent TED speaker, has helped design software and other resources that take into account the interactive ways tech-savvy students learn these days. “Our research-based approach to math instruction uses carefully designed learning paths to build persistence in problem solving,” he said. “With this approach, students gain a love of learning and a thirst for challenges that stay with them as lifelong learners.”

The Warren teachers spoke about Science, Technology, Engineering and Mathematics (STEM) education in grades 3 through 8. The district has incorporated technological learning into its middle school and four elementary schools, affecting more than 2,000 students. The students use software and other new resources, working together to solve problems in complex fields such as structural engineering and space technology.

Roberts and her colleagues said that after reviewing the STEM curriculum, they found that more students actively participate and that the technology allows for full-cycle learning, through which students ask questions and evaluate their own answers.

“There are so many new tools students and teachers can use,” said Roberts, citing software, Smart Boards and Google’s cross-application platforms as examples. “The technology is letting them do more.”

Elissa Malespina, a librarian at South Orange Middle School, attended TECHSPO for the first time. Presenting on an educational social networking site called Edmodo, she also had time to network with other attendees.

Malespina said the conference had expanded her outlook. “I got to see things from the administrative perspective and talk to them about technology, which administrators might not understand as much,” she explained. “They saw how we’re using it in our school, and many of them talked about how they were interested in taking it to their schools.”

Malespina added that she learned a lot from other attendees about how to prepare for standardized tests like the statewide NJASK. “They talked about ways to use technology to prepare,” she said. “To have all those teachers listening to that is great.”

TECHSPO is only one of a number of N.J. conferences aimed at getting administrators, teachers and school boards up-to-date on technology trends here and trying to spur adoption of technology in the schools.

There are two upcoming N.J. ed-tech conferences — the West Essex Technology Symposium, to be held on March 2, 2013, and the New Jersey Education Association (NJEA) TechCon 2013, to take place on July 24, 2013. They will provide additional opportunities for educators to become familiar — and administrators comfortable — with new tools available to them.