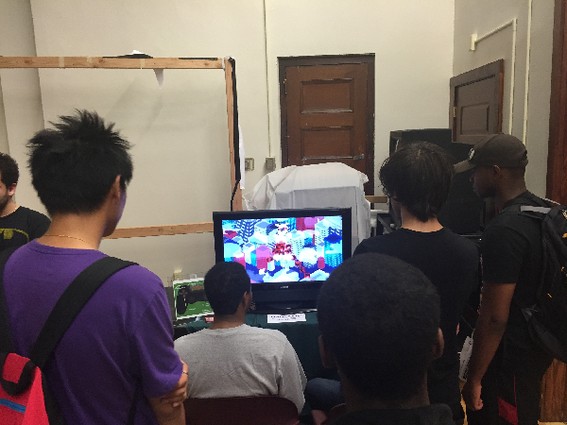 Independent game designers from both the analog and digital worlds displayed their latest creations at Bloomfield College (Bloomfield) on September 16th.

Some 25 teams showed off their games—designed for platforms such as iPads, computers, consoles and playing cards—to hundreds of gaming fans and curious Bloomfield College students.

“There’s … a need in [the gaming] community for free events, both on the part of developers to show their work to the public, as well as attendees to interact with these games and to perhaps be inspired and make their own games,” Chung said.

“This is the first time we’ve ever hosted something like this in Bloomfield,” he said. “In the past, we’ve held events in Manhattan, Brooklyn and even Hoboken, but this marks the farthest we’ve ever gone outside of New York City. So we’re seeing how it goes.”

With platforms such as Steam Greenlight, Kickstarter and ID@Xbox giving independent game developers access to mainstream game consumers, creating a home-brewed game and offering it to millions of people through a major online store has never been easier.

One of Chung’s goals is to inspire those interested in game design to see the kinds of games being developed by small groups and individuals. “We want to make this game design community open to everyone and be inclusive. That’s why we keep everything free of charge and that’s why we’re doing it all the way out here in New Jersey, because this is the biggest meetup of its type in New Jersey. There’s a lot going on in New York City and San Francisco, but I think New Jersey really needs something like this.”

One of the student organizers, Michael Murphy, a Bloomfield College game design major, serves as art producer for the Game Development Club, whose mission is to organize and promote game designers from around the campus. Murphy said that he was surprised by the massive turnout. “It looks like there are definitely more people here right now than I anticipated would show up.”

One of the games, “Looting Atlantis,” in which the goal is to escape the imminent destruction of Atlantis with the technology and goods needed to start a new life on another continent, was one of the many tabletop games on display.

The creator of “Looting Atlantis,” Nick Sauer, a board game fan and game designer, conceived of the game while speaking with a fellow game designer about another board game project. While looking at the board with his friend, he saw that the design was “too restrictive,” and he reengineered it to expand playability.

“Luckily, the project wasn’t picked up, so I was able to build upon [the previous design],” Sauer said. He added that “Looting Atlantis” was the first of his creations that he’s felt comfortable shipping, and is using Kickstarter to fund development. “Kickstarter has made it possible for someone like me to publish a game like this,” he said.

Game designer David Rin exhibited “Eternal Jupiter,” a PC game that he designed and developed on his own. Rin described it as a “bullet hell” game, in which the player must dodge and deflect an onslaught of projectiles while shooting back at enemies.

At 35, Rin is a relative latecomer to the gaming scene. He said that his interest in game design goes back to when he was 18, but at the time he couldn’t find a program in New Jersey that focused on game design. “I went to school for computer networking, but I left school and went to work doing networking for a high school. As time went on, I ended up getting a job working as a vendor in the video game industry,” Rin said.

Rin lost his job during the recession. Soon after, he picked up a copy of “Game Maker” and made a few simple games. Realizing that he had a talent for creating games, he enrolled at Brookdale Community College for classes in game development in 2011.

The next meeting of the LaunchNJ Art and Tech Collective will be held in Atlantic City, where the group will attend the Gameacon – Game Arts Conference, at the Tropicana on November 20 to 22.