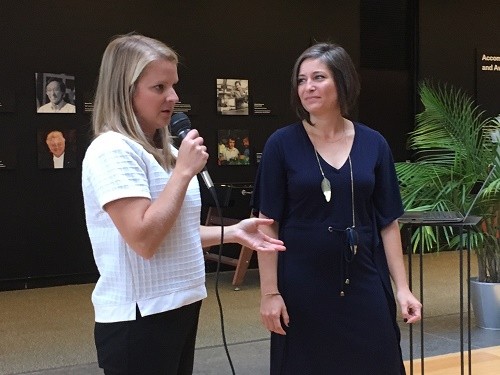 With few exceptions, the time-honored press release is no longer viewed as an effective communications tool in today’s digital age, according to the public relations and marketing experts who gave a presentation called “Forget the Press Release” on October 20 at Bell Works, in Holmdel.

“No one cares about your press release,” said one of the panelists, Shannon Winning, who owns the digital PR and marketing firm Rival Marketing with her partner, Jennifer Smiga.

But companies and other organizations continue to churn out press releases, even though many journalists and other influencers have little use for them.

Reporters and editors ignore most of the press releases because they can’t keep up with the daily deluge of unknown companies announcing product launches, or because the releases tend to lack any real news that their audience would be remotely interested in, according to Winning.

Companies that cling to the press release as their only communication tool fail to understand that the way people communicate with each other has changed dramatically, Winning told the audience.  She explained that the Internet has fostered greater connectivity in communications, and that PR has closely aligned itself with this technology to build greater awareness of products, issues or trends.

Social media and other forms of digital communications are heavily used to influence behavior, whether it’s a question of promoting a product or service or creating awareness of a vital issue.  Today, “there are more places to share the message and cultivate relationships,” Winning said.

Blogs, tweet chats and other forms of content on social media platforms have replaced the press release as the most efficient and effective way to build a loyal following and brand reputation.

However, quality, not quantity, of the content still reigns supreme in public relations, marketing and journalism, whether it’s on a digital platform or on paper, according to Winning.