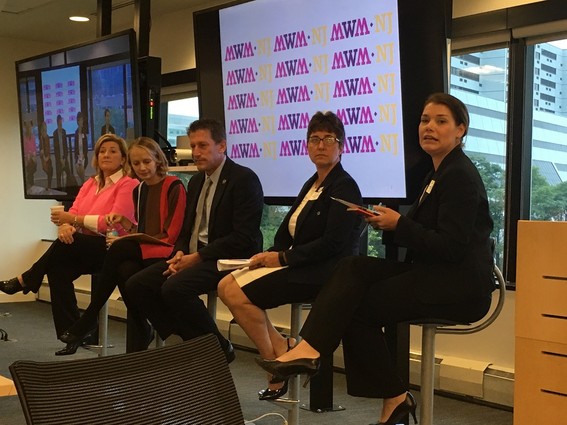 Monica C. Smith, founder and CEO of Marketsmith, an integrated advertising tech firm based in Cedar Knolls, said that her company is thriving by being a place where smart women in math and science who have left the workplace can apply their talents.

She made these remarks while participating in a panel discussion at the Women in STEM Summit, held by the Million Women Mentors – New Jersey on Sept. 30.

“We are one of the largest women-held advertising tech company in the tri-state area,” she said. “We developed our analytic platform by applying math and science to marketing tactics.”

Smith said she started the company right after the “dot.com” boom, when there was no money to help finance it. She recognized early on that in order to do math well, Marketsmith needed humans, and “suddenly there were humans everywhere” in the company. That prompted the question, “How am I going to pay for all these folks? There’s got to be a way to automate their thought processes.”

Fast-forward five years, and now Marketsmith, with the help of investors, has a tech company called “iPredictus” (Cedar Knolls), which is billed as “the industry’s most user-friendly data automation platform.” Smith did it “without having any kind of technology expertise.” She said that she made it through the process and, while it was the best bet she ever made, “it almost killed me.”

Her betting on high-tech marketing automation has paid off, she told the group. “It has made our margins so good, and so healthy, that we were able to compete with the large holding companies. …That only came with a risk assessment I was willing to make on retraining the workforce and taking a risk on those folks.”

Always an advocate of women in STEM, Smith noticed that women were falling out of the company’s pipeline, mostly because they wanted to have families. However, the necessary skills for working in science and math had to continue to be honed through the years. People need to continuously upgrade their skills and learn new ones.

Also, Smith noted, the statistic of 400,000 jobs in tech being unfilled in the future reflects her company’s situation. “Every day I live this statistic,” she said, discussing the trajectory of her company’s growth. “And guess who will fill those jobs. It won’t be entrepreneurs, unless they are backed up by a lot of funding,” she said. Instead, the job candidates will go to the big companies that can afford to pay well.

“The mentoring I do is for the humans who work at Marketsmith,” said Smith. When job candidates come through the door, she asks herself, “Are they agile enough? Are they tough enough? Do they have enough grit to relearn, rethink and reapply the skill set they once had, the desire they once had, to bring it to a new modern-day form of marketing?”

“I’ve got gals and guys who give me their best, and without their brains and grit I wouldn’t be where I am today. Certainly, they are far smarter than I am, but they’ve been willing to be retrained.”

Smith suggested that the Million Women Mentors organization shouldn’t only mentor women who are just out of school, but all women. “The reason our pipeline is so leaky is that we are not inspired,” she said. “A lot of the science and math teachers that women are seeing are guys.”

“Every woman should have a chance to be re-engaged, re-challenged, and reeducated, and to circle back into the workforce, at any age, at any stage of her life,” she stated.

Later, she suggested that a new level of education should be created for folks who have been displaced or who have left the workforce. There is an entire labor force of people in their 30s and 40s and even older who want to be retrained, she said.