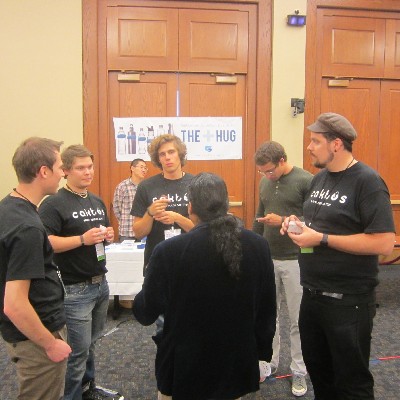 The Caktus team on the TechLaunch demo day. | Courtesy TechLaunch

Caktus, which traveled to the TechLaunch (Clifton) accelerator from Finland, has landed $200,000 in seed funding in a round led by Kima Ventures. Kima is a European venture capital company that invests in more than 100 hopeful startups per year.

Caktus’s hardware/software hybrid product is designed for consumers who want to be coached in staying properly hydrated. A flexible sensor (called The Hug) that fits around any water bottle is coupled with an app that can track drinking frequency and then push notifications about adequate water intake to users.

Since TechLaunch, Caktus has returned to Finland, but “we are still officially headquartered in Clifton,” CEO and cofounder Panu Keski-Pukkila told NJTechWeekly.com. The team is now running the business from Finland.

Said Keski-Pukkila, “It has been impossible [for us] to reside in the U.S. due to visa issues.” It is hard to get working visas for a young company without funding, he stated. “Now I am doing the work to change that and looking into options of getting visas. So I am hoping that part of the team would be able to come to the U.S. this summer,” he added.

An investor-led technology accelerator, TechLaunch was created in 2012 as collaboration between founder Mario Casabona and the New Jersey Economic Development Authority (EDA) to drive the commercialization of emerging technology created by aspiring entrepreneurs. Since then it has launched 19 technology-focused companies, several of which have received follow-on funding.

TechLaunch investors, including the EDA, continue to be shareholders in each funded company, Casabona told NJTechWeekly.com. The actual quantity of shares (equity) before and after the follow-on funding may change, he noted. “We are in it for the long haul, and we exit alongside the founders. We make our ROI [return on investment] when our founders … do,” he said.

Caktus recently tested its new prototype iteration, which it will present at the Mobile World Congress in Barcelona at the end of February 2014, the company said in a release. The new seed funding will help Caktus tweak its product for manufacturing and launch a crowdfunding campaign so customers can preorder The Hug.

Keski-Pukkila said, “We are very happy about closing the round and eager to finalize our prototypes and make The Hug available to consumers, who have already told us how excited they are to finally get it. For a hardware company such as ours, raising … seed investment can significantly accelerate product development.”

Mario Casabona added, “There’s more to startup success than an innovative idea and the brains to bring it to market. It’s a collaboration of like-minded individuals, combined with lots of hard work, determination and a certain degree of luck. From day one, the team at Caktus proved to be worth investing our time, money and expertise. I’m personally very proud to count them as a TechLaunch company.”

After the TechLaunch LaunchPad2 Demo Day, Keski-Pukkila commented on his experience at the accelerator: “We pivoted our product just before the program started and did not do other major changes on that front during the summer. Our brand and personality did evolve over the summer and still keeps doing so. I think that the biggest overall change has been in our professional self-confidence; the team members have been surprising even themselves on a constant basis. Now we feel very confident pushing this forward on full steam and going out there to continue building our product, acquiring customers and of course raising funding.”

The Race to Embrace Remote Online Notarization (“RON”) in Response to the COVID-19 Pandemic https://buff.ly/2w9a43W NJ on the right track but moving too slowly.