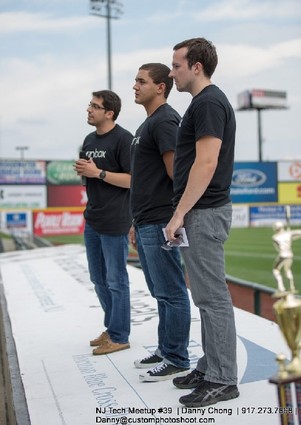 The folks at TechLaunch, NJ’s tech accelerator, have been uncharacteristically quiet during this 16-week LaunchPad session, but their newsletter gives some insight into what their companies have been doing.

It looks to us like the teams have been receiving a lot of advice from a number of experts and have been pitching to practice panels leading up to the accelerator’s demo day Sept. 19, 2013.

At least one of the pitch sessions, July 9, was run as a competition resulting in rankings by the angel investors judging them.

First some news about the new class of companies:

We covered the newly minted LaunchPad 2 teams here. However, LaunchPad 2 added another company after its May 16th kickoff, Invidio, a company that allows users to purchase clothing and other items from their televisions. “Imagine the beautiful bag or suave shirt you’ve seen on TV countless times can now be easily identified and purchased from the comfort of your recliner.”

LaunchPad 2 company 30 Second Showcase released its app to the app store. The app is a way for creative types to use their iPhones to show off their photography, art, and designs, beautifully. It can be found here.

LaunchPad2’s Private.ly—the team that won Startup Weekend Madison—has pivoted and is now called Inbox. The team just submitted version one of Inbox to the Apple app store. Along with its new name, the company’s page has a new look and the product has a new suite of capabilities born out of customer interviews and market analysis. Says TechLaunch: “With a focus on ‘smarter messaging’ the team is working hard in advance of their coming launch.” Check out their website for a preview.

Inbox, along with Invidio, pitched at the most recent NJ Tech Meetup ( which was a joint meeting of many other NJ tech meetup groups) August 2nd. The meetup took place at the TD Bank Ballpark before a Somerset Patriots game.

Pervasive group, maker of mmGuardian parental software for smartphones, was the second TechLaunch company to receive funding. The first, Echolocation, received $200,000 in follow-on funding in January 2013 from a number of angels including Casabona Ventures, and individual investors Craig Sher and Ira Cohen.  While Echolocation is formally Brooklyn-based, founder Brian Donohue is a graduate of Stevens Institute of Technology in Hoboken and can often be found in and around New Jersey.

LaunchPad 1 graduate QuickCliqs, a group planning and messaging application for “casual” events, said it was ready to release its flagship application on iOS.